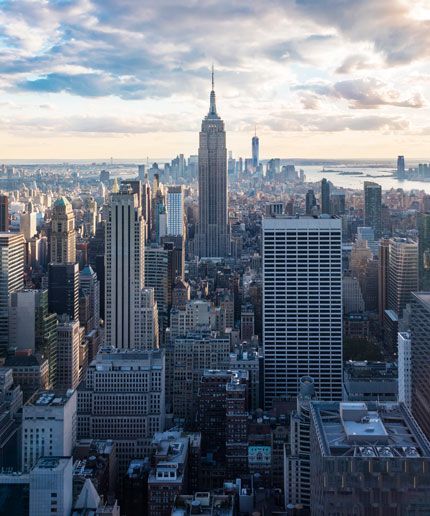 Moving is the worst. And the best. It can signal a fresh start or a devastating end. Whatever your style, wherever you settle, at the end of the day, the most important thing is finding a place to call home. Check out more from our "Get The F Out" moving package here.

I have never been in love with a person, but when I am asked to explain my relationship with New York City, I often find myself relying on the language of romance. "It just feels like it's meant to be," I'll say, starry-eyed. And, like many great love stories, it almost didn't happen.

In 2013, I was running from two things: a customer-service job I hated, and a city where I was horribly lonely. I had moved to Boston only eight months before, looking for a new start. It only took the fading of a gorgeous New England summer into a dark, long New England winter to realize I'd miscalculated my grand life relaunch. I didn't know where else to go, and while I daydreamed of moving to New York, I also entertained the ideas of taking up organic farming in New Zealand, going to grad school in California, or following in the footsteps of my fellow millennials and just moving home for a few months to plan my next moves.

I decided to take the plunge after two casual conversations. The first was with my mom. We met up in New York City one freezing long weekend in February. At our first dinner, after squeezing ourselves into a booth at a ramen place in the East Village, I confessed that I was thinking of leaving Boston for Manhattan, even though I didn't have much of a plan. My mom first fell in love with New York in the '80s, when she would visit college friends who shared a grimy one-bedroom just blocks from where we now split $8 Tsingtaos while trying to converse over the thumping bass of old-school hip-hop. Giddy off the energy of the city (and one too many overpriced beers), she listened to my complaints and didn't hesitate in offering advice. She asked me how many people I knew in the city, and after I hit double digits, she interrupted me.

"You should do it. You should move here," she told me. "If you know that many people, I think that's a good enough start." We didn't talk about particulars, but I knew that I'd have my parents' support, both financial and emotional, to get started.

A month later, I was once again complaining about life in Boston, this time to my friend Jon on Gchat. "Should I just quit my job and move to New York?"

"Do it!" he urged. "You can crash at my place!" In the thick of his first serious relationship, he had more or less moved into his boyfriend's apartment, leaving his Williamsburg bedroom unoccupied for weeks at a time.

A few days later, I gchatted him with the news, "Jon! I quit my job. I'm moving into your place in three weeks."

"Wait, really???? You did?"
Realizing too late that his offer had been more theoretical than real, I dug in my heels. "What's a fair rent to pay you? Half your monthly rent?"

The next day, I listed my apartment and all my furniture on Craigslist. Within a week, I had a subletter, a recent Brown grad who came by with his parents and took over the lease on the spot. Less than a month later, in April 2013, I packed my remaining possessions and my cat into a rental minivan and headed for New York. I put everything except two weeks' worth of clothes (and Pickles the cat) into a storage unit in East Harlem, paying the signing fees with my leftover Christmas money. Despite not having a full-time job or a permanent address, I was on my way.
I used to tell people the idea of moving to New York had never occurred to me before that miserable winter in Boston, and it was a lie I believed for a long time. After college, a solid number of my friends decamped from Philadelphia to move to New York, which baffled me. I found NYC to be too confusing and big; I had difficulty remembering if it was the avenues or streets that ran north to south. I wanted to stay in Philadelphia, where I had gone to college, or eventually move back home to Tennessee. Boston, a hail-Mary pass for post-grad satisfaction, felt crazy enough. Never in my post-college daydreams did New York seem like a possibility.

But then, nearly a year after moving here, on a gray March day, walking through the lingering snow slush, I suddenly remembered, apropos of nothing, that I had always wanted to move here. My mother, in an attempt to get me out of the house and out of her hair during a slow summer, had enrolled me in a musical theater camp. Even though the camp was in Chatanooga, it began a one-sided romance with New York that lasted until I realized I absolutely couldn't sing (at around age 14). Because once I knew I loved Broadway musicals, that meant I loved Broadway, which meant I wanted to be on Broadway. Thanks to Rent, I even thought I'd do well crashing as an artist in a condemned warehouse. I wrote songs about my big-city dreams -- songs that (bless them) only live in my memory. Then I grew up, and the New York of my adolescent ideals faded until it never felt real in the first place. Nowhere is that magical.

Except, for twentysomething me, it is. There aren't choreographed dance numbers, or meet-cutes with Meg Ryan and Tom Hanks, but after living here for three years, New York still feels like a miracle. It's like one day I realized I could actually slip through the Looking Glass.

When I first arrived, everything felt so much more alive than anywhere else I'd lived before: riding the subway, or jostling through crowds at Union Square. Even being inside took on new meaning. I would be at home-- which, really, could have been an apartment anywhere -- and I would think, with a shock: New York City is outside! I reveled in those surprising moments of quiet, like watching the yellow cabs barreling up Lexington Avenue at 1 a.m., and it felt like I had found a secret that only New York and I knew.

Everything that made my heart swell into my throat was totally banal: foliage in Central Park, or dollar pizza slices when I was broke. I still crane to see the Statue of Liberty whenever the B train goes over the bridge into Brooklyn. I stop every time I can see the Empire State Building, thinking about people who have traveled from around the world to visit the top, and I just get to see it as I'm making my way out of Duane Reade with a Diet Coke and new tube of toothpaste.

One day, leaving a street fair on the Lower East Side, I found a canvas pouch with block letters that read "New York Is My Boyfriend." I knew I had to buy it immediately. I love showing it to people -- it's almost a litmus test when I meet new friends -- true New Yorkers just get it. But the real question I have now is this: Is New York my husband? Am I committed to this city for life?

It was a crush that drew me to New York. I moved not so much because I wanted to be in this city, but because I needed to leave the bad relationship I was having with Boston. If you asked me then, I would have said NYC would be home for the next two or three years, five max. Now, I'm three years in, and the idea of leaving in two years makes me feel queasy. I can't imagine being satisfied -- the city is too big, and there's still so much to do.

Like any romantically involved couple, New York City and I have a few things to work on. At the height of the summer -- with the crazy heat and terrible smells -- I take every chance to escape for a weekend. But when my plane lands on the return flight, my stomach does flips when I see the skyline. I am home, reunited with my one true love.