I still have enough time in Iqaluit, Nunavut's capital, to recoup for my earlier failure to find Sylvia Grinnell territorial park. I find an office in a shack and enquire. "First right, first left, you can't miss it," I'm told.

I'm quite insulted. How dare he question my ability to get lost? "You'd be surprised what I can do," quoths I to the smart-arse, leaving the office in high dudgeon -- and promptly getting lost. 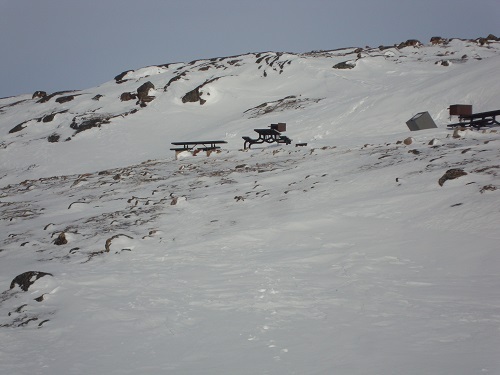 After some to-ing and fro-ing, I turn down a side road, past a seven-foot high snow bank, behind which, truly hidden, is a wooden board: Sylvia Grinnell park.

Traipsing up a perilously slippery snow and ice incline, with many a close shave with Mother Earth, I find myself on a ridge with frozen benches and icicled picnic tables, and a splendid panorama of white plains, frozen rivers and hoary hills unfurling before me. I want to make a couple of notes, but now the pen has gone and frozen up, too 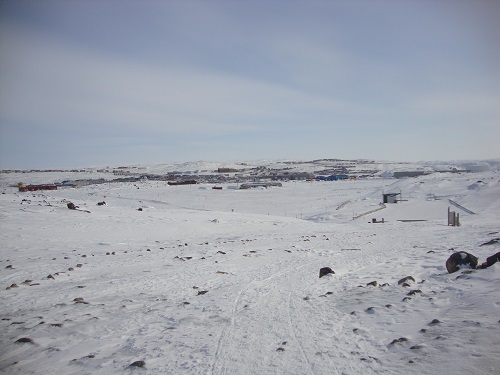 View over Iqaluit from the park

The 40-minute turbo-prop flight from Iqaluit to Pangnirtung takes you over a snowy, icy wasteland, the plain gradually fracturing into mountains and fjords -- but not before a dirty great creature approaches while you're still on the ground with an enormous neck swivelling this way and that, now up, now down, hovering menacingly over the wings.

It looks just like one of those Martian war machines in War of the Worlds. 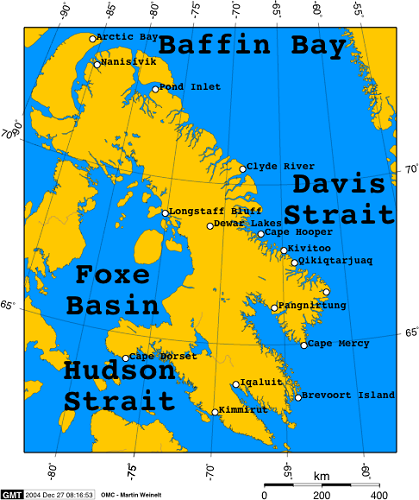 It's a mobile de-icing contraption, with a long cherry-picker arm ending in a glass enclosed cabin with a gentleman directing a spurting nozzle of liquid at us. 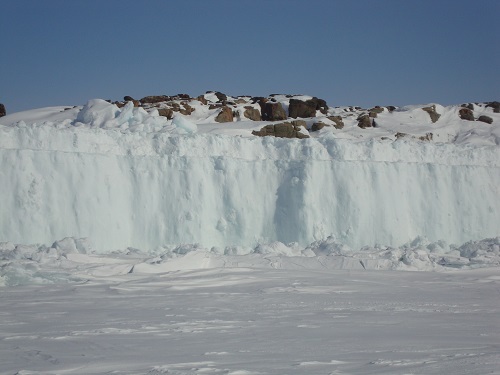 Pangnirtung spreads out at the mouth of a fjord just a couple of dozen miles south of where the Arctic Circle cuts across Baffin Island -- that's if a little hamlet with 1,500 inhabitants can be said to spread. 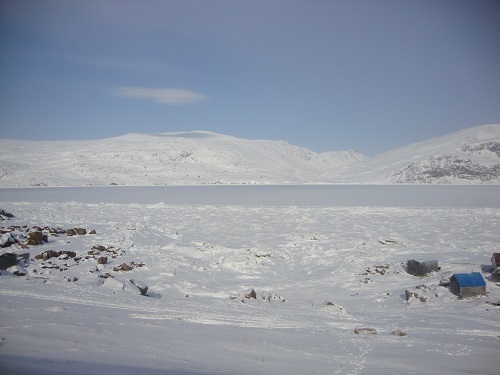 The name comes from the Inuktikut word Panniqtuuq meaning "place of many bull caribou," and it's the gateway to the magnificent mountainous Auyuittuq National Park -- Auyuittuq meaning the Land that Never melts. 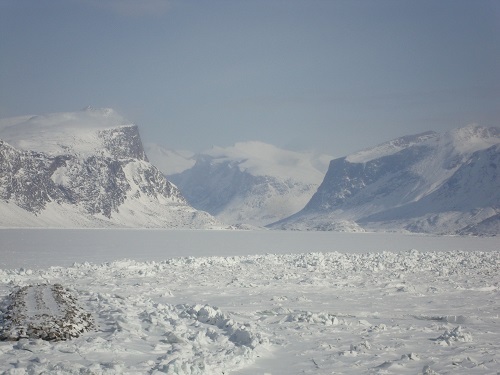 Now you can hike north through the park, across the Arctic Circle to Qikiqtarjuaq, the other gateway -- if you have seven days to spare and sufficient bats in your belfry.

An English guy from Cheltenham has just done that in reverse with a friend, partly with spiked boots, partly with skis. There are sleep-over huts along the way. At the Owl River they were awakened by a loud banging at the door. It was a dirty great polar bear trying to get in. Now, you don't say "come in" to a polar bear knocking at your door -- they can weigh a ton and are very aggressive. 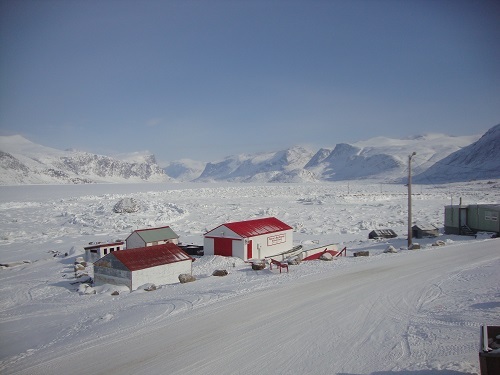 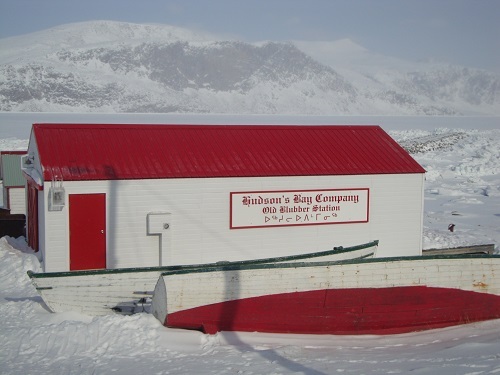 This one eventually left Mr. Cheltenham in peace, but he's into serious adventures. Last year he was in Resolute Bay preparing for the start of what was meant to be a five-week walk across the ice to the North Pole, but it fell through (not literally).

Yours truly, of course, will be covering the Pangnirtung-Qikiqtarjuaq leg in 40 minutes in a nice little ATR 42 turbo-prop. 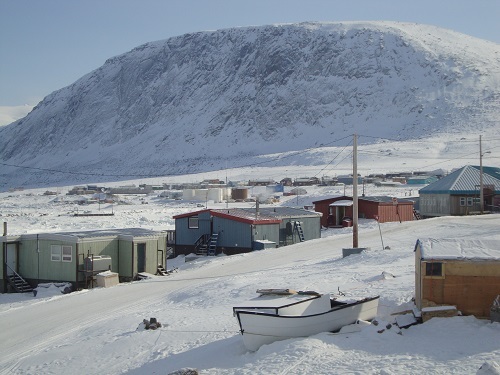 It feels positively balmy here -- it's further north than Iqaluit but there seems to be very little wind chill. It's about 10 Fahrenheit (-12 centigrade). I can go around without a neck warmer or balaclava. The fjord is surrounded by mountains, which must keep the wind off -- my pen is only half frozen.

For $225 the hotel is a joke -- a tiny box room without a shower/wc, not even a wash basin to pee in at night. 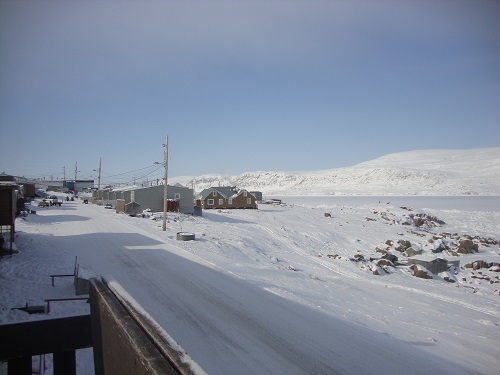 For the Inuit, Nanook is the Great Polar Bear in the Sky, and a film at Auyuittuq park headquarters here tells you all you need to know if you run into one. If he/she approaches, stand your ground, shout, wave your arms, and let him/her know that you're human, since humans evidently are not on his/her preferred menu.

Human? Hello Nanook, I'm human and you're not, so go stuff yourself! Hm, I don't think so. 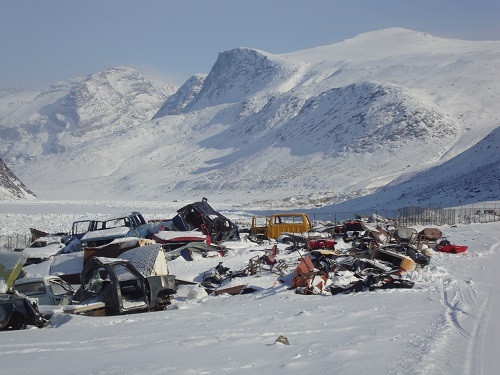 You have to determine the nature of the bear's approach, the film suggests. Is it just curious? Does it think you're food? Or does it feel threatened.

If it's curious, just stand still till it's satisfied its curiosity. If it thinks you're food, don't run, fight for your life, arm yourself with stones if you don't have a gun and try to hit it on the nose. If you have a gun, shoot to kill. If it feels threatened and becomes aggressive, repeat as above. 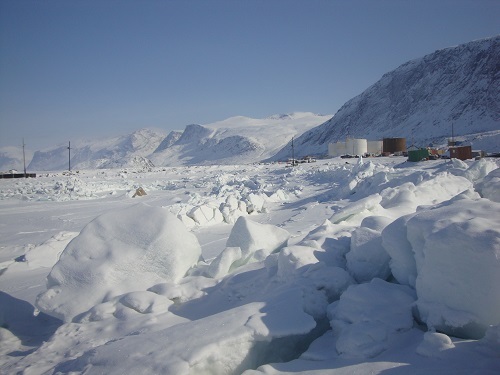 Time for a nice afternoon stroll into the snow valley between the granite walls by the side of the frozen fjord. Who was that barmy idiot who said it feels positively balmy? Yes, there IS a wind chill factor; it's -3 F (about -20 C). Fortunately, I've stuffed the neck wrap and balaclava in a pocket. 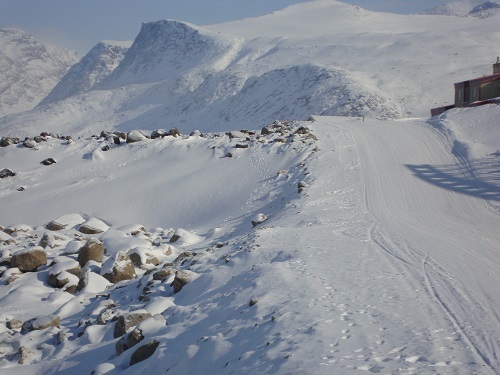 Lagged like a winter water pipe against a burst, I continue on into the valley. It's truly splendid in the frozen golden sunlight. The icy fjord glints, the snow-covered crags, cliffs and jagged peaks radiate a faux fire-glow warmth in the lengthening orange rays, and my eye lashes have now frozen over with glinting icicles.

After an hour outward bound I turn round. Back in the hotel's warmth my eyelashes finally defrost and the icicles melt.

More views from the fjord walk 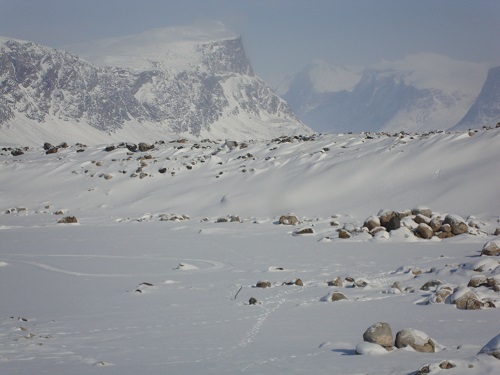 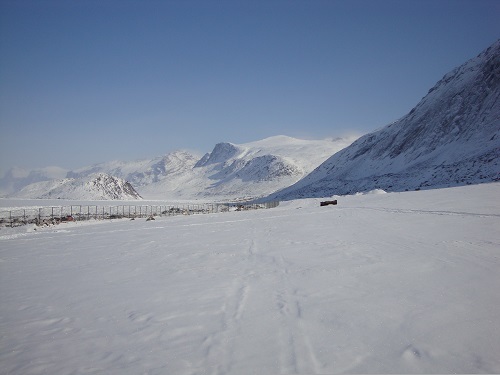 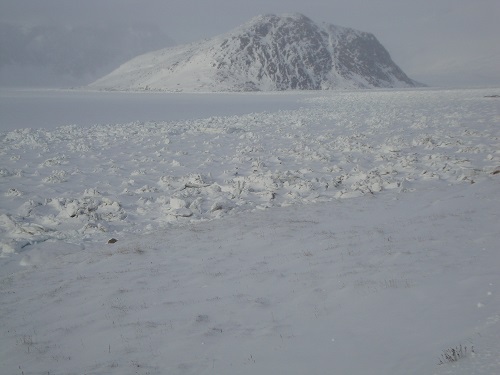 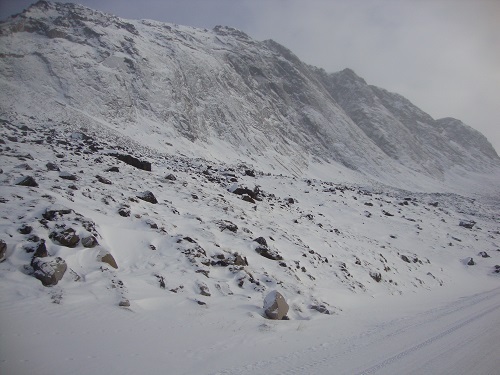 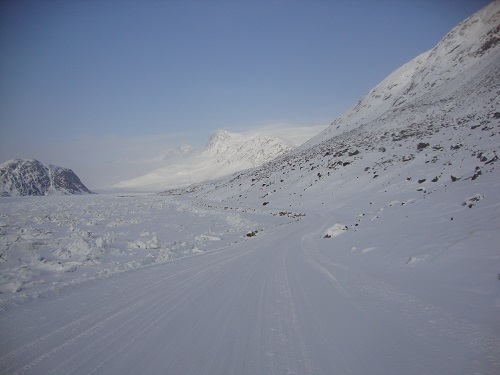