Anne Washburn's brazenly idiosyncratic play, Mr. Burns is having a stellar run at American Conservatory Theater in San Francisco with Mark Rucker at the helm. In the play the survivors of a North American apocalypse barely salvage food or weapons but in abundance they salvage culture in the form of the Simpsons, and specifically the 1993 episode "Cape Fear."

The play is divided into three linked yet contrasting sequences. The first is set during the apocalypse - the inference being that it is some sort of pandemic as a result of a national nuclear power plant disaster. We meet a seemingly homeless group of anxious survivors huddled around a campfire who to distract themselves from the horror are recounting the plot of the formerly mentioned Simpsons episode.
The set-up is awkward, but intriguing: as this eclectic group of what could be mistaken for hipsters - all of them appear melancholy and nervous apart from Nick Gabriel's Matt, who is loud and nervous. As they attempt accuracy at relaying details of the Simpson's plot we also learn of the apocalyptic horrors they are living under.

Seven years later Act II shows us a society that has regressed even further with the group from Act I now making a living acting out old 'Simpsons' episodes for paying audiences, along with medleys of popular '00s hits. And in ACT III, set another 75 years on thing have taken a more ominous deadly turn.

Although, obscure, Washburn's play is masterfully brought to life by a stellar ensemble and impeccable direction. Overall the themes presented bring into question whether or not faced with profound uncertainty we would do everything in our power to maintain what's 'important' for the human race? Or what comforts us? And is there a difference?

Even if you've somehow never seen a second of 'The Simpson's", Washburn's imaginings are provocative in themselves with an ultimately comforting message - stories are essential for our survival 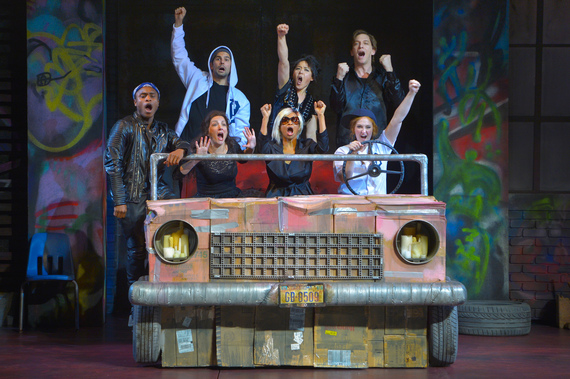 The company of Mr. Burns