It's kind of ironic that Mr. Peabody & Sherman has a sequence involving the Trojan horse. Because according to what Rob Minkoff -- the director of this DreamWorks Animation production -- says, this new animated feature is actually something of a Trojan horse in and of itself.

Minkoff recalled during a recent interview:

When I was a kid, I used to watch a lot of television. And I was a big, big fan of Rocky & Bullwinkle. And during the "Peabody's Improbable History" segment of that show, Mr. Peabody and Sherman would time-travel back to various eras and then interact with all of these great figures from history.

Now you have to understand that -- because I'm just a little kid -- I have absolutely no idea who half of the historic figures that Mr. Peabody and Sherman are interacting with are. So in order to find who all these people were, I open up books, I ask questions of my teachers and my parents. So to my way of thinking, it was Mr. Peabody and Sherman who actually got me interested in history. Which then wound up being my favorite subject in school and is still a huge interest of mine even today. 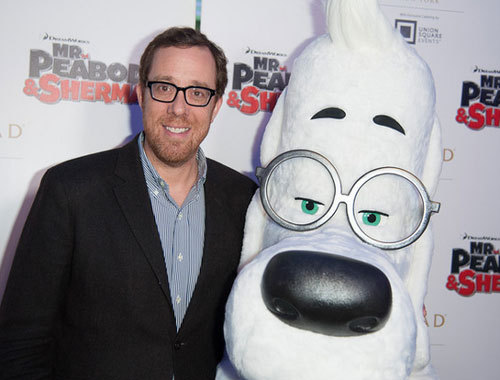 So when DreamWorks Animation approached Minkoff a few years back and asked him if he'd be interested in building a full-length animated feature around these two Jay Ward characters, Rob immediately jumped at the chance. Not just because he's been a big fan of Mr. Peabody and Sherman for decades. But also -- if Minkoff and his production team did their jobs right -- this new comic time-traveling adventure might then inspire a couple of kids to become history buffs.

Don't worry, though. The Mr. Peabody & Sherman movie is still very much in the style of their original segment from the old Rocky & Bullwinkle show. It's still a twisted take on history that's loaded with lots of clever wordplay and silly sight gags. But I'm also hoping that there'll be a few kids out in the audience that may have never heard of Mona Lisa or don't know who Leonardo Da Vinci is. And maybe once they get back home from the theater, these kids might still be curious enough that they'd then go online to learn more about these historic figures.

Mind you, in order to pull off his tricking-kids-into-being-interested-in-history Trojan horse operation, Minkoff and his DWA first had to figure out how to turn this five minute-long segment from the old Rocky & Bullwinkle Show into something that could then actually support a full-length animated feature. Which -- as box office busts like 1992's Boris and Natasha: The Movie, 1999's Dudley Do-Right and 2000's The Adventures of Rocky and Bullwinkle proved -- is a lot harder than it looks.

For us, the breakthrough came when we realized that -- at its heart-of-hearts -- Mr. Peabody & Sherman is really a story about a father and son relationship. I mean, when Jay Ward originally quickly sketched out the premise for this show -- a super-smart dog adopts a boy and then takes him on time-traveling adventures -- he was just going for laughs. Inverting that tired old cliché of a boy and his dog so that Jay and his writers could then do a comic routine based on a dog and his boy.

But as we got started developing Mr. Peabody & Sherman, we decided to take that part of their original back story seriously. What would it actually be like for a dog -- a single dog, on top of everything else -- to adopt a human boy? There'd have to be people out in the world who wouldn't really like this idea, who'd then try and make life difficult for Mr. Peabody and Sherman. Going that route with our story, adding some real emotion and conflict to the comic mix made for a far richer movie. Gave us a reason to actually care about this time-traveling dog and his boy.

Of course, then there was the challenge of finding just the right voice for Mr. Peabody. Given that Bill Scott -- the animation legend who originally voiced the world's most smartest dog -- died of a heart attack back in 1985, a canine recast was obviously in order.

I mean, when you really look at it, Mr. Peabody and Sherman were the original Modern Family. Their family bond flies in the face of convention. Which is what made us decide to take a look at ABC's Modern Family. That's where we found Ty Burrell, who turned out to be the perfect person to cast as the modern-era voice of Mr. Peabody.

And why was Burrell -- who plays Phil Dunphy, the well-meaning but doofy Dad on that Emmy Award-winning television series -- the perfect performer to voice the world's smartest dog? Minkoff insisted that it was Burrell's natural warmth.

The problem with a character like Mr. Peabody is -- because he's supposed to be so smart -- it's easy for a character like that to come across as being cold, above it all to an audience. But Ty... While he obviously understood the comedy of this character, he also had this natural warmth to his voice. Hearing him read the script, you really felt that -- while Mr. Peabody was still the smartest guy, er, dog in the room -- he also really cared for Sherman and always had his adopted son's best interests at heart.

And speaking of Modern Family... When Minkoff and his team went looking for just the right actress to voice Penny Peterson, Sherman's grade-school love interest in this new animated feature, they didn't have to go any further than the Dunphy's middle daughter, Alex. Who is portrayed by Ariel Winter.

In addition to Ty and Ariel, we've got Max Charles as the voice of Sherman. And behind these three, we've got all sort of big stars and comedy heavyweights in Mr. Peabody & Sherman's vocal cast. People like Mel Brooks and Stephen Colbert, Stanley Tucci, Allison Janney and Patrick Warburton. They did a great job of bringing all of the crazy historic figures that Mr. Peabody and Sherman interact with to life.

So -- just to recap here -- Mr. Peabody & Sherman is a big screen reboot of the "Peabody's Improbable History" segment of the Rocky & Bullwinkle TV show. It's also trying to trick kids into being interested in history while -- at the same time -- using the voices of some members of the cast of ABC's Modern Family as a way to ground this time-traveling story in reality, give this film some real emotional heft. Isn't that a lot to ask a single animated feature to do? 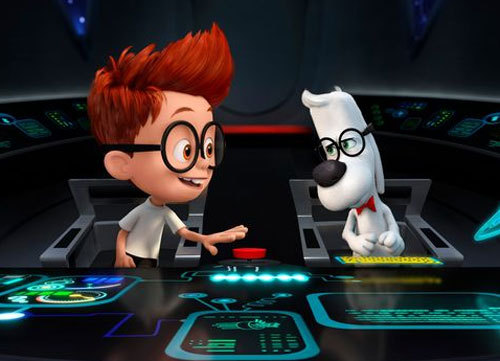 People used to say the same exact thing while I was working on The Lion King. They'd ask me what that movie was supposed to be about. And I'd then have to explain that it was this action-adventure set in Africa which has a lot of comedy and also musical numbers. But at the same time, The Lion King also tried to say some kind-of-ambitious and profound things about personable responsibility and being a member of a family. Oh yeah, and it stars a bunch of lions.

But that's why I like working in animation. Which is really the most flexible of the film mediums. So if you're looking to make a time-traveling adventure that's also a relationship comedy aimed at the family audience, animation is really only the way to go because it's easy -- in this medium, anyway -- to mix genres. Take a story that's been told before but then make it new by mixing in all of these different elements.

Of course, what really helps here is that I'm working at DreamWorks Animation. Which is a studio that's very open to the idea of trying different styles and different genres. Just wait 'til you guys see what they're doing with How to Train Your Dragon 2. That really doesn't feel like your typical animated sequel. It's very sophisticated, it's very dark and it's very adult.

Mind you, Dragon 2 doesn't open in theaters 'til June 13th. Whereas Mr. Peabody & Sherman opens domestically this Friday. So if you'd like to see what sorts of cinematic surprises Rob and his team have crammed into this Trojan horse of a movie, why not hop in the WABAC and head out to see this 20th Century Fox release of a DreamWorks Animation production?