Facing off with the world's largest coal company, which literally sank its first historic mine nearby in 1895, Rocky Branch farmers, residents and supporters fighting to protect their Shawnee Hills community against a violation-ridden and potentially devastating strip mine set up a road blockade this morning.

The action forced Peabody haulers to unload their equipment to the side of the road, as state police attempted to verify permit and road requirements.

As Peabody-hired loggers attempted to enter the main site later this morning, residents peacefully assembled and blockaded the county road leading to the Rocky Branch mine, stretching yellow crime scene tap across the road, and called on the state police to uphold the laws.

Peabody is operating with a DNR mining permit, though it has yet to obtain proper EPA permits for the strip mine operation. 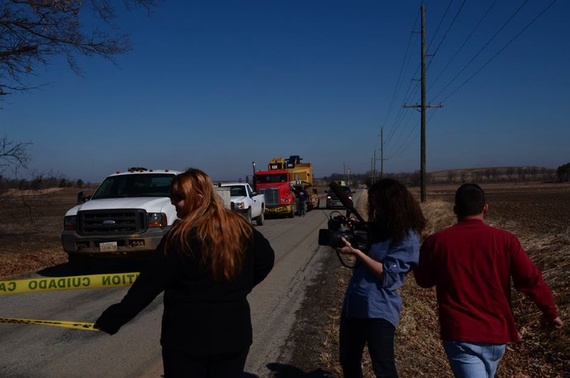 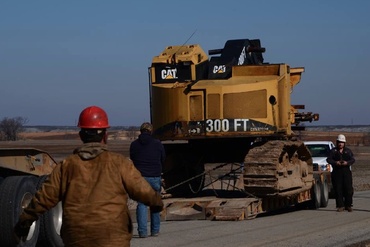 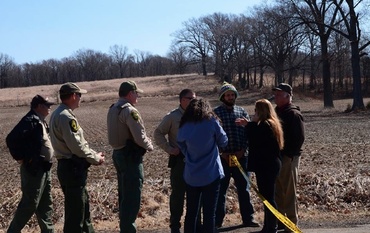 As out-of-state loggers clear-cut the forested Shawnee Hills, defiantly posting "Warning: Explosives in Use" signs without state Environmental Protection Agency permits, it may seem like Peabody's violation-ridden Rocky Branch strip mine site in southern Illinois is another lost chapter in the state's century-long history of backroom Big Coal deals.

Not for the undaunted Rocky Branch residents and farmers in Saline County, who have testified and provided unaddressed documentation on permit errors at all public hearings against the reckless mine proposal.

Drawing a line in the sand on the state's coal rush -- and drawing statewide and national support--their message is simple: Mr. Peabody's coal trains ain't haulin' our community away.

Protests, including road blocks, as well as court challenges are planned for today and the rest of the week.

"We are going to pursue every legal means that we can, but with the control the corporations have over the existing system, it will be difficult," Rocky Branch resident Jennifer Dumbris said, "which is why we need all the support possible from the Attorney General to citizens groups across the state and nation. The very fate of our community is now on the edge."

Check out a video of yesterday's clear-cutting in Rocky Branch, as loggers hurried to eliminate the probable habitats of the endangered Indiana bats. (Video courtesy of Christopher Oliver and Derek Deters.)

To borrow a line from Gov. Pat Quinn, who launched a similar battle nearly a decade ago to stop the Banner strip mine in Fulton County: "I urge your company to re-think this flawed idea."

Strip mining on this site threatens the drinking water of local residents and habitat of eagles, pelicans and fish. It will reduce tourism potential, strain local water treatment systems, and pollute the Illinois River and Copperas Creek.

Why has the Quinn administration now turned its back on the mind-boggling regulatory machinations by the Department of Natural Resources (DNR) and the Illinois EPA?

According to local residents, the Rocky Branch strip mine is not only a flawed idea, but one of the most bungled DNR permit decisions in recent history, and with mounting oversights, errors and violations, residents are now calling on Attorney General Lisa Madigan to file a petition requesting an internal administrative review of DNR's rushed decision to green-light a mining permit on Wednesday. 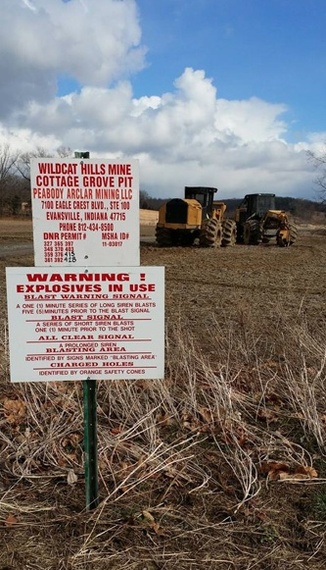 Ever since Peabody sank its first historic coal mine in nearby Williamson County in 1895, paying children and laborers 25 cents a box for hand-loading two thousand pounds of coal in deadly conditions, Saline County residents and coal miners like my grandfather and family members have taken a fearless stand for coalfield justice, galvanizing mine worker movements, as well as civil rights and environmental campaigns.

Rocky Branch residents plan to carry on that legacy again -- through the intervention of law enforcement agencies, in the courts, and in the courts of public opinion.

"Years ago the timber industry and the Forest Service pushed a plan to log over 3,500 acres around the Bell Smith Springs National Natural Landmark," said Sam Stearns, a former coal miner and Shawnee National Forest advocate, who recently led as successful campaign to remove the state's "clean coal" website for kids. "After a protracted battle with grassroots environmentalists, the logging finally began. Conventional wisdom told the environmentalists to give up, to accept the inevitability of the logging project. But two days after the logging started--- 10 acres out of 3,500 were cut -- environmentalists obtained a court order which halted all logging on the Shawnee for 18 years."

As citizens groups and support for besieged Rocky Branch residents continue to grow, Stearns added: "In order to win short-term battles to protect our land, we have to take a long view of the campaign. We have to adhere to to the principle of endless pressure, endlessly applied."