To say that the capture of Ramadi, the provincial capital of Anbar Province, by ISIL over a week ago was an embarrassment to the Iraqi army would be a massive understatement. After intense combat on the streets of Ramadi and the employment of dozens of high-explosive suicide car bombs over a period of several days, an Iraqi army force that outnumbered the enemy had to vacate their positions for fear of eventually being captured and butchered after running out of ammunition. Despite assurances from Iraqi and U.S. military officials that ISIL's seizure of Ramadi was nothing like the complete collapse of Iraqi army units in Mosul eleven months prior -- the Pentagon has insisted it was a pre-planned withdrawal in order to regroup later on -- the result was exactly the same: a humiliating defeat at the hands of a much smaller and evidently more battle-hardened force of ISIL militants.

However, to lay the entire blame on the Iraqi army wouldn't be fair. Whether the White House would like to admit it or not, the Obama administration also shares some culpability here. The fact that no other country other than the United States has dropped so much ordnance on ISIL targets, deployed so much airpower in the skies over Iraq and Syria, or sent so many men and women in uniform on Iraqi soil to re-train Baghdad's army means that something also went wrong on Washington's end. President Barack Obama cannot pull a George W. Bush on this one: that is, pretend that everything is going fine and that the campaign is proceeding according to planned (to Bush's credit, he courageously changed course years after the war was going terribly). The Ramadi debacle exposes that argument as beyond ridiculous.

Whether or not it's time for a strategy review in the Situation Room is unquestionably a topic of discussion among senior administration officials. Some very smart people outside of government are calling for an enhancement of U.S. air power, less strict rules of engagement on U.S. pilots doing the bombing runs, and a decision to embed U.S. personnel with the Iraqi army at the battalion level instead of keeping them away from the frontline.

Yet, President Obama needs to do far more than debate whether it's appropriate to change strategy. He also needs to get his national security team together and drill home the message to his advisers and cabinet members that they must synchronize their messaging and stop contradicting one another in public. Indeed, comments coming out of the White House, the State Department, and the Defense Department have been all over the place in regard to how campaign is going, how the Iraqi security forces are performing, and how strong the Islamic State is. There appears to be a disconnect between what officials in Washington are saying and what Iraqi troops are experiencing thousands of miles away. As Spencer Ackerman of The Guardian puts it, "Iraq veterans, thinktank analysts and former US officials have begun drawing comparisons to Donald Rumsfeld's Pentagon during the darkest days of the Iraq occupation."

That may be an overly broad or unfair description. But Ackerman has a point: the messaging over the previous five or six weeks from senior administration officials hasn't been good. In fact, it's given people watching the administration doubts that everyone is on the same page. 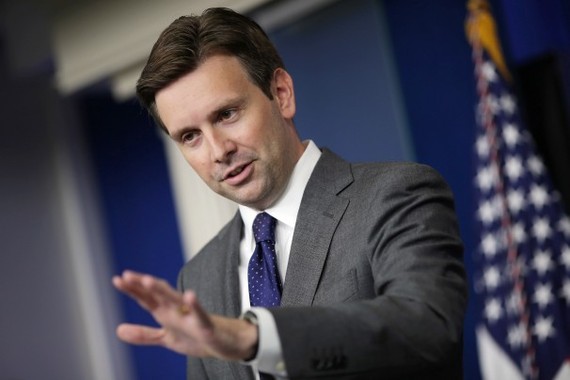 Take a look at these statements, two of which occurred on the same day but led to different conclusions:

Chairman of the Joint Chiefs Martin Dempsey at the Pentagon on April 16: "The city itself [Ramadi] is not symbolic in any way. It's not been declared, you know, part of the caliphate on one hand or central to the future of Iraq...I would much rather that Ramadi not fall but it won't be the end of a campaign should it fall."

Brigadier General Thomas D. Weidley (USMC), Chief of Staff of the Combined Joint Task Force-Operation Inherent Resolve on May 15: "if you look overall throughout both Iraq and Syria, Daesh does remain on the defensive. Again, I talked before about we will see episodic temporary successes. But again, these typically don't materialize into long-term gains. We've seen similar attacks in Ramadi over the last several months of which the ISF has been able to repel. And we see this one being similar to those, where the ISF will eventually take back the terrain that's been lost at this point."

White House Deputy Press Secretary Eric Schultz on May 18: "As you know, Ramadi has been contested over the last 18 months. We've always known the fight against ISIL would be long and difficult, particularly in Anbar Province. There's no denying that this is, indeed, a setback. But there's also no denying that we will help the Iraqis take back Ramadi."

White House Press Secretary Josh Earnest on May 19: "[W]hat we have seen is the effective use of American military airpower and the effective use of our training expertise to equip Iraqi security forces and Kurdish security forces to enjoy areas of significant progress. And whether it's retaking Kobani, or more recently, retaking Tikrit, or preventing a genocide at Mt. Sinjar, or retaking the critical infrastructure around the Mosul Dam, those are areas of progress and where we have enjoyed success because of the strategy that the President laid out."

White House Press Secretary Josh Earnest on May 22: "It's [the anti-ISIL campaign] going to require a sustained commitment. But again, based on the progress that we've seen so far -- it has been met with some setbacks -- but based on the progress that we have seen so far, I would anticipate that over the course of the next couple of years we will see ISIL sustain additional losses."

Senior State Department Official on May 22: "This [the capture of Ramadi] is a very serious situation. No one is kidding themselves about that."

Defense Secretary Ashton Carter on May 24: "What apparently happened [in Ramadi] was that the Iraqi forces just showed no will to fight. They were not outnumbered. In fact, they vastly outnumbered the opposing force, and yet they failed to fight, they withdrew from the site, and that says to me, and I think to most of us, that we have an issue with the will of the Iraqis to fight ISIL and defend themselves."

Vice President Joseph Biden on May 25: "The Vice President recognized the enormous sacrifice and bravery of Iraqi forces over the past eighteen months in Ramadi and elsewhere."

Press Secretary Josh Earnest on May 26: "What Secretary Carter said is consistent with the analysis he's received from those who are on the ground."
-------

Who exactly should we believe? Who's right? Who's wrong? Who is overconfident in their predictions? And why doesn't President Obama have control over public messaging on an issue that will contribute to his legacy one way or the other?