The legendary message machine of Barack Obama, after 38 days of fumbling, finally shows at least one sign that it's going to get back on track after having blown it badly. Commander Thad Allen, a qualified and trusted leader, will finally take over the briefings, relieving Sect. Salazar of a duty to which he was unqualified. I was on the first conference call with Com. Allen, when he first said that there was no way to estimate the amount of oil gushing, opposed to BP's marketed lies about what was being released. As for Carol M. Browner, President Obama's climate change and energy policy adviser, she has been the least convincing of anyone.

As BP readied its latest fallback plan to stop oil gushing from one of its wells in the Gulf of Mexico, the Obama administration and the company warned that the crude could continue flowing until August, compounding threats to coastal wetlands, fisheries and beaches.

White House energy and climate adviser Carol M. Browner said Sunday that the oil spill was "probably the biggest environmental disaster we've ever faced in this country" and that "we are prepared for the worst." On the CBS show "Face the Nation," she said that the "American people need to know that it is possible we will have oil leaking from this well until August when the relief wells will be finished."

So, we're now all caught in a horror film entitled Waiting for BP.

The whole problem with Pres. Obama's continued reliance on BP is that there was never any proof that they could get the job done, because contrary to the mantra coming from federal officials, BP simply could never be trusted. They have been in a place of epic corporate damage control that prevents them from being transparent about how this blowout happened in the first place. Everything from that point is mitigating the damage that can be seen. 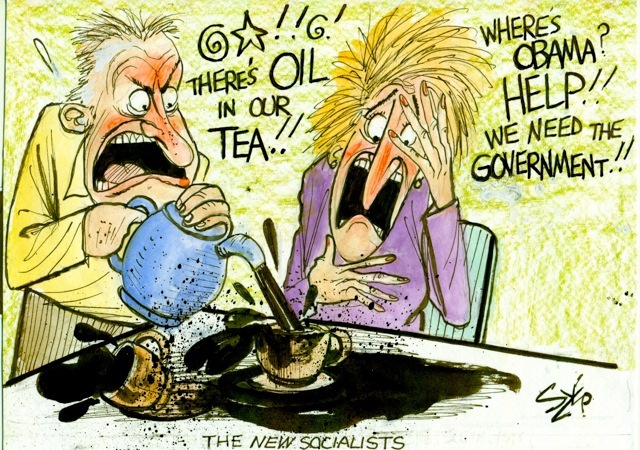 Gov. Jindal's outrage and frustrations are understandable, even if it's contrary to conservatism to have a Republican screaming about federal help. Let that be a lesson to the small government rabble. Politics aside, Mr. Jindal should be given every resource he needs and then some. Arguing with him on technicalities of Corp of Engineers is petty and small. Give him everything, sand barriers, anything else.

What we're now seeing unfold brings to mind what was said on Dylan Ratigan's show last week by Matthew Simmons:

"... The thing you need to be terrified about is there might be no way to put this out other than waiting for the giant oil (inaudible) to deplete, which would be 9,000 days. So what they're already worried about is that it's going to take (the oil) out of the Gulf of Mexico."

I also find the juvenile back and forth between Robert Gibbs and James Carville not only beneath the debate that needs to take place, but nakedly political on the part of Gibbs. The only thing that will help Pres. Obama is if this leak is stopped. Saying that Carville, who is on the ground in Louisiana, doesn't have the facts to weigh in is insulting, elitist, and arrogant.

All anyone has been seeing for over 38 days is the futile fumbling of BP. There has been no federal action out of the White House to give people the sense that there is another side at least mobilized on another front. This is about perception as much as anything, which the Obama team should know full well. There has never been any federal efforts that Obama is overseeing, which would offer another point of information, study or fact gathering that can lead the public to believe Pres. Obama is not only in charge, but has people mobilized beyond BP. People need to see Obama's leadership in action. Watching BP fail over and over again is going to start sticking if he's not careful.

Oil experts I've emailed or with whom I've had dialogue offered some suggestions, which I believe would make a huge difference even at this point. I've compiled some, which includes my own interpretations of what was written or said, to prove that it's not that hard for the Administration to show visible signs of leadership that would have an impact immediately.

Aid to businesses: Obama needs to get the ball rolling on economic damages immediately. This takes BP, Transocean, Halliburton and Cameron International Corp (who supplied the rig) working together. Get the money flowing now. Immediately. This should be Obama's number one priority. Use last year's tax return as jumping off point.

Plugging the well: Obama needs to assemble a task force of oil and drilling company CEOs beyond BP. These individuals will come up with a plan of action beyond "top kill." This group will also decide what role BP will play. A spokesperson from the group will report.

Clean up the gulf: All the governors of the states impacted, plus scientists and environmentalists in another group. Same thing as above, get a plan of action together, one person report.

Wildlife and bird rescue: International Bird Rescue Research Center (IBRRC) needs all the help they can get. Pick a team, the best team should be assembled, plan of action, one person reporting to Obama, as above.

If Pres. Obama had done these things from the start he wouldn't be in this colossal political mess. His Administration also wouldn't look so out of control.

With every passing summer month, as we all wait for relief wells to be constructed, Pres. Obama's leadership will be drawn more into question with every dead bird, destroyed ecosystem, with the sobering bottom line that the President should never have trusted BP in the first place, which I wrote days ago, let alone made them the only company on point after the blowout occurred. It could end up being a fatal mistake.