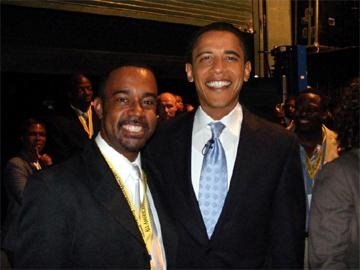 Mo'Kelly supports his president and is a diehard Democrat...but let's be clear; Mr. President, you're wrong on Michael Vick.

"NBC's Peter King reports that Barack Obama called Philadelphia Eagles owner Jeffrey Lurie earlier this week to congratulate him for giving Vick a second chance after his release from prison. According to King, the president said that released prisoners rarely receive a level playing field and that Vick's story could begin to change that."

It would seem the phone call was inextricably linked to Vick's success, not the moral conscience of the Philadelphia Eagles organization.

Moreover, the call wrongly attributes altruistic motives to the Philadelphia Eagles, suggesting the organization wanted to affect the perception of convicted felons more than they wanted to pad their bottom line or win a Super Bowl.

Mo'Kelly's not buying that or any supposed beachfront property in Nebraska either.

Just FYI, there are dozens of convicted felons in the NFL and none is on any roster as a social rehabilitation experiment or statement on the viability of ex-cons as productive citizens.

Each and every one, (Vick included) is on an NFL roster because he gives his team the best chance to succeed...period.

Michael Vick on an NFL roster was never a case of charity. He may be a lightning rod for controversy amongst PETA members and dog-lovers worldwide, but he's still a world-class athlete and only originally asked to back up former starters Donovan McNabb and Kevin Kolb. (Translation: minimal investment by the Eagles which later generated tremendous returns.)

Other questions it prompts...

Does the Trojan corporation get a phone call from President Obama if it gives Tiger Woods "a second chance" with an exclusive multimillion-dollar condom endorsement deal? Would Trojan then be about the business of changing the perception of/leveling the playing field for philandering professional athletes? Imagine the campaign slogan...

"Unleash the Tiger in your pants! Got Wood?"

Does President Obama call (x) team if/when former NFL receiver Rae Carruth gets out of jail for conspiring to kill his girlfriend and unborn child and is hired as a stadium peanut vendor in 2018 (his expected release date)?

Did the NBA's Washington Wizards earn a smiley face magnet for the staff refrigerator in allowing Gilbert Arenas back into the locker room after bringing his cache of guns to work? Because we all know that the Washington Wizards (formerly the Washington Bullets) are all about "leveling the playing field" for idiots and the guns they bring to the workplace.

OSHA would be proud to be sure.

Professional sports is a meritocracy, not a charitable organization about the business of garnering presidential voicemails. If Michael Vick were to unfortunately suffer a career-ending injury in his next game; he would be cut, his career disappear and his non-guaranteed contract money right along with it.

President Obama's phone call (and subsequent spotlight) would have been better served highlighting individuals and entities truly about the business of helping everyday African-American men reintegrate themselves into society after prison; not offering more inappropriate idolatry of athletes.

Let's not rewrite history and attribute altruistic motives where they do not belong or exist.

Praise Michael Vick for his football prowess. Applaud the Philadelphia Eagles for the shrewd construction of its present team. But never should any president be heaping praises of morality on an organization for simply attempting to sell more tickets, win more games and ultimately make more money. Eventually, President Obama will concern himself with the issues most important to African-Americans, as in the multitude. It just won't be today as this clearly is not one of them.

No, you can be sure Mo'Kelly won't be receiving a cabinet-level appointment or the Presidential Medal of Freedom from this administration; but that's ok. It's about telling the truth.

The truth is that this was a poor choice by our president, yet one consistent with his support of Wall Street and big business.

Congratulating the Philadelphia Eagles for doing "the capitalism thing" under the pretense of it being "the right thing" is wrong and the wrong message to send young African-American males.

Somebody has to say it...might as well be Mo'Kelly.

"Mr. President, you are wrong on Michael Vick."

Morris W. O'Kelly (Mo'Kelly) is author of the syndicated entertainment and socio-political column The Mo'Kelly Report. For more Mo'Kelly, go to his site. Mo'Kelly can be reached at mrmokelly@gmail.com and he welcomes all commentary.