Rape is in the news on every continent: Korea, India, Nigeria, Brazil, and in the daily Twitter-talk but not least in the rhetorical whirlwind spinning around candidate Donald Trump. Mr. Trump rails against hordes of dark little men pouring across the Rio Grande to rape white women--even as one of the candidate's rejects confesses that she often felt "raped" by Trump in his younger self. "No, not criminally," she was forced to explain. But Mr. Trump's rape problem doesn't really concern how many starlets he has or hasn't deflowered. It's really about how he and his movement--and it is a movement--understand what makes a real man.

For the Trumpeters waving the Make America Great Again banner, the nation (maybe the world), is suffering from a collapse of masculinity. What the Donald promises is to mount up all those potentially hard males who have grown limp under the regimes of Carter, Clinton, Bush and Obama and who risk ultimate castration under a new Clinton reign. Despite his platform boasts about his own equipment, what he's really railing about is a form of collective self-violation.

It is no accident that all this locker room babble coincides with the new wave of toilet chatter over a miniscule percentage of school children who are declaring themselves as transsexuals, or more precisely as boys giving up their would-be manhood to become trans-women. (No one seems at all agitated about adolescent girls sprouting stubble and pumping up pecs.) Still, the implacable Trump has a nose for playing on both conscious and subconscious fear.

In one sense, of course, raising rape to the top of the news agenda is a good thing in spite of the Texas, North Carolina, Oklahoma and Indiana hallucinations. Talking about rape is surely a welcome change from the enforced silence its victims have had to suffer since the time of St. Augustine under the rule of blind and deaf Catholic bishops. Across all those centuries rape remains a crime without data, whether committed by the godly soldiers of the Conquistadors, the Communist liberators of China or the Confederate defenders of womanhood in Mississippi. Rape, more recently assumed to have been committed by darker complexions against paler ones, has been ubiquitous.

When a minor accusation against a leader of the French Ecologist party captured the headlines of the French press last month, it signaled two things: first, women's rejection of silence; second, a new readiness by a significant minority of French men to hear the charges and to react seriously. Which gets us back to what's behind the panic over junior high bathrooms.

Despite the blistering tirade from Texas's attorney general and the leaders of North Carolina's legislature, there is no reliable evidence that transgender people have any record of committing sexual assault. Undoubtedly one day such a case will surface among those who have not already been sliced by the surgeon's knife or undergone hormone treatment, but so far the ledger is empty. What then is the panic about? It's not at all about girls at risk; it's about "real masculinity" under threat.

To address the reality of transgender females, or trans-women, requires acknowledgement that a measurable minority of people born with the social privilege of carrying a Y chromosome wish deeply to relinquish that privilege. To conventional male perception, giving up such a privilege seems beyond imagining. Almost without exception (apologies to Carly Fiorina, Margaret Thatcher and Angela Merkel) males control the world's religions. Males run the world's most powerful corporations. Males direct the affairs of state, and they command the world's armies and armaments industries. Concretely and symbolically, to relinquish masculinity, as hard-thrusting Mr. Trump has come close to suggesting, represents collective self-annhilation. "Make America Great Again" means nothing less than restoring the penile power that the candidate has repeatedly proclaimed is his mission.

Trans-panic in itself represents little more than a wart on the beast marching the world toward gender Armageddon. Far greater and more profound is the reality that people carrying XX chromosomes (called females) are mounting the first genuine challenge to male dominion since the mythic Allela wielded her double edged ax as leader of the Amazon warriors. XX people are now outscoring XYs (known as males) in every field of advanced university studies in every major nation around the world except those that legally block XXs from those studies. In four of ten US households, XX people are either the sole or the primary bread winners, a four-fold increase since 1960 when Donald Trump and North Carolina Governor Mat McCrory were in knee pants. Since 2000 manufacturing jobs, held mostly by men with no more than a high school diploma (and often less) have dropped from 20 percent of the workforce to 5 percent. Meanwhile wages for those mostly XY workers have fallen as industrial jobs for males have essentially disappeared and those jobs that remain have seen pay rates frozen in relation to the cost of living. (All data from the Bureau of Labor Statistics)

Are women today paid more, job for job, than men? No. Women on average earn 81 percent of the wages earned by men in the same jobs. The gap has expanded and contracted across the last three decades, but one inescapable reality is that women have increasingly displaced men in middle management jobs since Donald Trump failed to qualify for the varsity team. Moreover, managerial and business training has increasingly shifted to women who have long ago given up the notion of depending on XY people to provide them economic security. Not only are most people in the workforce XX people; most middle-managers in American business are XXs.

A study by the Pew Research Center last fall found that seventy-nine per cent of those who lean Republican believe that their side is losing politically. A Rand survey in January found that voters who believed that "people like me don't have any say about what the government does" were 86.5 per cent more likely to prefer Trump. Trump supporters feel that they, and the country, are losing economically, too. In the Rand survey, Trump did better with the people who were the most dissatisfied with their economic situation, and exit polls from the Republican primaries show that almost seventy per cent of those who voted for Trump said that they were "very worried" about the state of the economy--as against only forty-five per cent of all voters in Democratic primaries.

Bluntly stated, the gender threat to the XYs is greater than it has ever been in recorded history. Little surprise then that those moving toward the short end of the see-saw are angry at the inescapable evidence that the gender game is undergoing upheaval--be it in the exotic terrain of grade school toilets or in the legions of MBAs taking over the Social Security Administration in America or private business in Russia or storming the macho management gates at Walmart. Remember that the next time you count how many XYs are relegated to pushing the baby stroller while their XX mates are working late at the office writing the algorithms to predict baby stroller sales. Or, as a study by the Pew Research Center reported last fall 69 percent of Trump's backers see as themselves as political losers, while a parallel Rand exit poll survey in Republican primaries found that 70 percent of Trump voters saw their economic security in danger--despite clear and dramatic hard data showing overall unemployment having dropped by 20 percent over the last seven years. At the same time Centers for Disease Control mortality data show middle aged white males death rates rising for the first time in decades--mostly from drugs, drink and suicide.

In plain talk, everybody in America but the Trumpeters is doing better, and their justified fear is turning to rage, rage aimed mostly at anything and anyone that doesn't seem like a real hairy male.

No, Donald, your campaign is not about making America great. It's about Making America Male Again. Wave your thin, plasticized, colorized bouffant locks as hard and rhythmically as you want to, but it's not going to happen. There is no turning back. Not only is the economy changing, in ways that would be impossible to turn back. So has our basic understanding of gender and gender roles. This has been liberating for millions of women, and not a small number of men and fathers. Women are thriving. Women are proving themselves to be more adaptable and resilient than men. Women are living longer and healthier while men are dying earlier and sicker. The trick, Dear Donald, is not to turn back the clock--but to "man up" in new kinds of ways. And, this isn't just the latest trend, it reflects our new understanding of gender--not simply I Tarzan/ You Jane, not simply Nature, not simply even Nature and Nurture, but a complex fluid dance we are only beginning to understand. If you can read the science--put in a call to Stephen Hawking. He'll explain it in grade school terms.

Frank Browning is the author of The Fate of Gender: Nature, Nurture and the Human Future, Bloomsbury. 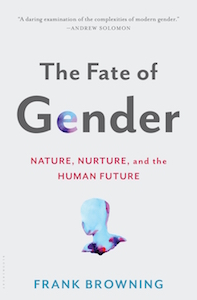