Billionaire real-estate mogul Donald Trump is the best entertainer that the American political system has to offer. Even before he decided to run for President of the United States, Trump loved to talk about his enormous accomplishments in the world of business, how much money he's made from building hotels, resorts, and buildings in New York City and around the world, and what a great negotiator he is. His 1987 book, "The Art of the Deal," was a New York Times bestseller for a long time, and the title perfectly summarizes his state of mind and what he probably says to himself each time he looks into the mirror and puts his suit on before heading to work: "I am a great dealmaker...and I'm not going to "make America great again."

You can't deny that Trump has dominated the presidential race from the first day he declared his candidacy. His poll numbers are through the roof compared to his Republican competitors; a RealClearPolitics average of the major national polls puts Trump above his second-place opponent (Ted Cruz) by 17 points. During last Tuesday's Republican debate in Las Vegas, he tried to embarrass Jeb Bush by reminding the 18 million Americans who tuned in that the former Governor of Florida was barely registering. "You're never going to be president of the United States by insulting your way to the presidency," a serious Bush told Trump during one of their many battles. "Well, let's see," Trump responded, "I'm at 42, and you're at 3. So, so far, I'm doing better."

Donald Trump is wealthy for a reason: he's a genius in the business world and knows how to make money for himself, his family, and his company. He is using the same exact playbook to get the attention of Americans. Let's be honest: it's working so far.

Yet, if marketing is Trump's strong suit, moving away from the brash bluster, bumper-sticker rhetoric in favor of policy specifics is his fundamental weakness. Indeed, the same language that is no doubt entertaining on the debate stage is simplistic and substance free when you actually read his performance on a transcript. Trump's latest appearances on NBC's Meet the Press and ABC's This Week are illustrative, because they expose in clear English how wrong and misleading some of Trump's remarks are on foreign policy. Below are just a few of Trump's quotes from his last interviews of the Sunday shows, compared what we call reality.

Here is the reality: Hillary Clinton was America's top diplomat responsible for executing the country's foreign policy. Like all Secretaries of State in American history, Clinton served at the pleasure of the President, which means that she could be replaced if and when President Barack Obama felt like his administration needed to go in another direction. As we all know, this never happened: Obama kept Clinton on his national security team throughout his first term, something that he would not have done if Hillary was going off the reservation and making foreign policy on her own. It is the job of the President of the United States to set policy, and the job of the president's cabinet officials to implement them to the best of their ability. If we want to be technical about it, what Trump refers to as "her policies" are actually the polices of President Obama.

There is no question that Hillary Clinton agreed with much of what her boss wanted to accomplish around the world. But there were circumstances when Secretary Clinton and President Obama didn't see eye-to-eye on tactics and strategy. 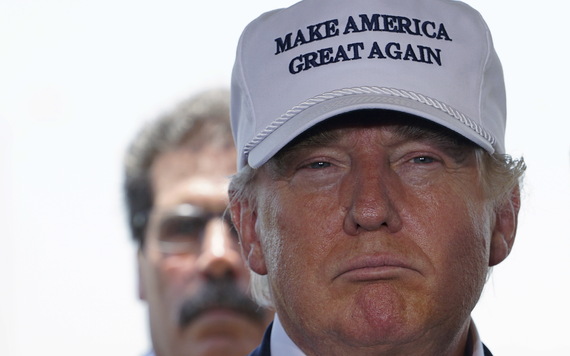 When she disagreed with President Obama, she had a responsibility to bring up those differences to the President and press her case during private conservations in the Oval Office and in national security meetings in the Situation Room. As the public record shows (and as she writes in her memoir), this is exactly what she chose to do. On Syria, Clinton teamed up with CIA Director David Petraeus, Defense Secretary Leon Panetta, and Chairman of the Joint Chiefs Martin Dempsey to create a program that would send the opposition movement the weapons and equipment they needed to increase the military pressure on Bashar al-Assad's regime. President Obama rejected that proposal before gradually coming around to Hillary's position less than two years later, when the situation in Syria was far more complicated and extremist factions on the ground were proliferating around the country and growing in numbers.

GOP presidential candidates love to bring up the Russian "reset" as if it was a complete failure, but the fact of the manner is that the policy did in fact provide the United States with some concrete benefits. Chris Christie, Jeb Bush, Marco Rubio, Ted Cruz, and Donald Trump seem to forget that the reset policy was designed to improve relations between Washington and Moscow enough to get things done. Unless the Republican field opposes tough multilateral economic sanctions on Iran at the U.N. Security Council -- sanctions that Moscow supported -- and believes that capping the amount of nuclear warheads, delivery systems, and international ballistic missiles that Russia can deploy is a bad idea, then they shouldn't be complaining about the "reset" policy.

Either Mr. Trump is being disingenuous, or he hasn't read the Iran nuclear agreement closely (if at all). "The Donald" of course isn't alone in bashing the Joint Comprehensive Plan of Action and misrepresenting the agreement as a 21st Century version of Munich. Indeed, the best that a Republican candidate will say about the JCPOA is that the deal should be given time to fail before it's torn up. In the first several months of his campaign, Trump argued that he would "police" the agreement as strictly as possible so Iran would not be able to violate any of its tenants. Either I haven't been paying too much attention to his campaign, or Trump has replaced that reasonable approach with the more familiar 'this deal is bad deal' line.

For someone who prides himself as an expert negotiator, surely Trump understands that the United States and its allies would have been unable to place strict and verifiable limits on Tehran's nuclear program without providing concessions in return. Does the author of "The Art of the Deal" really believe that U.S. diplomats could have pushed Ayatollah Ali Khamenei into eliminating 98% of his uranium stocks, 67% of his centrifuges, a remodel of his Arak plutonium reactor, and 24-hour IAEA inspections for a couple of pennies? Would Trump prefer providing the Iranians sanctions relief BEFORE IAEA nuclear monitors certify that Tehran was living up to its obligations under the agreement? What exactly would his policy be: unilaterally ripping up the JCPOA without any thought to the consequences, like overturning two-plus years of diplomatic work that was supported and endorsed by America's closest allies?

I humbly suggest to Mr. Trump and his campaign that they read the JCPOA again.

[I]f Russia wants to bomb the hell out of ISIS and join us in that effort, I am absolutely fine with it. I think that's an asset, not a liability.

In an ideal world, Russian President Vladimir Putin would be far more cooperative in coordinating with the U.S.-led military coalition against the Islamic State. But the reason Moscow is not a part of the 60-plus nation counter-ISIL coalition is because Russian aircraft have barely taken any military action against ISIL targets at all. In October, the Pentagon and the State Department both claimed that 90 percent of Russian sorties in Syria since their intervention began on September 30 were directed against non-ISIL rebel groups -- some of which are the same groups that the United States and the Persian Gulf monarchies are funding and arming to recapture ground that was previously lost to the Islamic State. The fact of the matter is that the U.S. and Russia have a very different interpretation of what a terrorist organization is; for Moscow, the definition supposedly encompasses any opposition faction on the ground that is using force to overthrow Bashar al-Assad's regime. All of this is in addition to the high number of civilians who have been killed from Russian bombs since late September, the latest of which was were a series of airstrikes on December 20 on a courthouse in Idlib province in which dozens of people were killed.

Instead of taking Vladimir Putin's words for granted and believing that he's actually sincere in his call to defeat ISIL, perhaps Donald Trump should open up a newspaper or start reading the many testimonials from on-the-ground witnesses, civil society organizations, and human rights groups documenting the war.

Trump's poll numbers are sky high in the Republican field, but polls don't mean he is being accurate on the Sunday shows.