Max Szadek is the Founder and Executive Director of Divabetic®. Szadek, who toured with pop singers Luther Vandross and Lionel Richie, left that road trip to go on a new one -- diabetes community outreach. Szadek is bringing diabetes education to largely African American women through showbiz glitz and glam. This is the fourth in my series of profiles on diabetes change leaders. 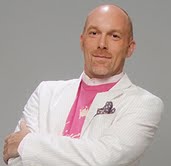 Q: What inspired you to start your program Divabetic®?
Max Szadek: I was Luther Vandross' personal assistant for 13 years and right before the release of his album in April 2004, Luther had a stroke. I was the one who found him. I knew Luther had type 2 diabetes, but he never talked about it. He traveled with 50 people to support his music, but he managed his diabetes alone. That was a mistake.

When I brought Luther to the hospital the doctors told me his stroke could have been prevented. That shocked me and made me regretful and ashamed that we hadn't done something sooner.

While his fans were holding vigils, I looked at what Luther had done for me. He had plucked me out of regional theater to go on the road with him. I was so grateful I wanted to give back, and I wanted to do something for his fans. African American women are disproportionately affected by diabetes.

When the news reported Luther's stroke they never made the association with diabetes. I felt that was wrong, but it also provided a huge opportunity to let others learn about diabetes health-related complications.

Patti LaBelle, a good friend of Luther's, inspired the name "Divabetic." In the middle of her tribute concert to Luther she stopped and said, "I have diabetes but it doesn't control me, I control my diabetes!" I looked up at the stage and thought, Oh, my god, you're not a diabetic. You're a "Divabetic!"

Luther loved divas: Diana Ross, Dionne Warwick and Aretha Franklin. The diva is an outspoken woman like Patti LaBelle was about her diabetes in that moment. I believed if Luther had talked about his diabetes, he might not have had his stroke. So I thought let's use this idea of "Divabetic" to get people talking about their diabetes.

Q: Divabetic® has grown from a New York City support group in 2004 to national makeover events and now social media. What defines Divabetic® for you?
MS: It's several things, but at the core it's a community for women. It's a safe haven for all women living with diabetes to come, get connected, be comforted and be cheered on to stay healthy and upbeat about their care. It's also a new approach to learning about diabetes. We use references to pop culture, pamper women and provide learning, all with the sass and sparkle of a theatrical event. I am a showman at heart.

Q: It's ingenuous, or crazy some would say, to educate women by having them put on a boa, which you do in the chapter support groups. Tell me how this works?
MS: I noticed, when traveling with Luther, his female backup singers would get their hair and makeup done, get manicures and pedicures and wear $10-$20,000 gowns. Luther felt if he could make this woman feel fabulous she was going to give him a fabulous performance. He was right.

I saw when the women were in makeup chairs and one on one with the stylist, as they became more beautiful, they became more confident and talked about things they usually wouldn't. That idea fueled our  "Makeover Your Diabetes" events.

Each woman at our event would sit one on one getting a spa treatment while talking with a diabetes educator. We set it up in progressive education stations; you learn a little and get pampered and then move on. You are comforted, connected and cheered on.

The events were big, expensive, flashy shows -- 1,000 women would come. It was like a rock concert coming into town and we got great response across the country. Unfortunately our sponsor Novo Nordisk had budgetary cut backs so for now the event's been put on hold.

Q: Is Divabetic® only for women and do you think the concept only works with women?
MS: We do have men at our events, but I see women as the hub of the family and so the most important person to educate. I've been approached to do more events for men, but I thought it would be confusing to have an organization named Divabetic® and not have it be women-specific.

Q: Have you ever looked back at the career you gave up?
MS: It's funny, a few years ago I was given the opportunity of a lifetime -- to go on the road with Madonna. At the time I was on the road with our Makeover events and chose to stay there. It was too big a deal for me what happened to Luther. The world doesn't need one more person working on rock and roll. We need a rock and roll approach to diabetes.

Q: I imagine some people must say to you, "You don't have diabetes" or "You're not an educator" or "How can you expect by putting a boa on a woman she'll take care of her diabetes?"
MS: A lot of people think you can't be serious if you're having fun. They're also confused by my concept. Simply, it's to make a woman more receptive to learning and want to take care of her health by making her feel good about herself.

I see these women who are casually dressed maybe in sweats, camouflaging their appearance, not connected to their body and then they transform by having someone give them a mini massage or manicure, a new hairstyle or makeup treatment. They begin to feel better about themselves.

People say to me, "Why would you put on fashion shows for plus sized women? They need to all go on a diet!" I say you have to make women feel beautiful. When people feel beautiful and care about themselves they will want to take care of their health.

As for not being an educator, I have top diabetes educators working with us. I know my limitations as a non-credentialed health person and as a man. I also constantly learn from talking with real women with diabetes. Whether I'm in New York or at the Cleveland, Philadelphia or West Palm Beach Divabetic® chapter, someone's question, confusion or success has me rethink how we're talking and what we're doing.

Q: Are you where you expected to be when you started this journey?
MS: Not at all! Right now my team members are laughing because I never thought I'd be in social media. As a live performer I love being close to my audience and the applause. We started Divabetic® six years ago in a room at the McBurney YMCA in Manhattan, where we still are by the way, doing meetings around flower arranging and lingerie because when you get people doing something fun and relaxing they start opening up about their diabetes.

My whole approach has always been carnival and big top, that's where I'm from. At one point the Makeover events got so crowded people told me to go onstage and entertain everyone. That was the birth of "Mr. Divabetic."

But I realized to reach more women I had to go online. I started taking stage show elements and putting them online. Now we do videos, games and a radio show, Diva TalkRadio. I'm particularly proud of one game we play on the radio called "Diabetes Numerology." It came out of a conversation with the women at our meetings.

A lot of women, specifically with type 2 diabetes, are fearful of their blood sugar going too high or low. They're worried about it yet they don't have a plan. On "Diabetes Numerology" we give our listeners random situations about blood sugar and ask them what they'd do. There's no shame or blame because it's not their number. In three to five minutes listeners are making a plan for themselves. We know how to fasten our seat belts in case of turbulence, yet women don't know how to handle high and low blood sugar.

Q: What's next for "Mr. Divabetic"?
MS: I really want to be the road show for diabetes education. I want to continue to do live events because not everyone is on Facebook or Twitter. A lot of people still need someone to touch their hand and say, "It's OK." When we take off all the rhinestones and glitter, I think no one would dispute that. I will go where anyone needs me. I still do free, open door medical center events and go up to talk in Spanish Harlem where people may not travel to midtown Manhattan.

Q: Such as?
MS: One time I got permission to go into McDonald's with a registered dietitian and we coached people on how to order off the menu. I've gone into beauty salons to present education. I've been on the street at craft shows and at the plus size modeling conventions. They squeezed me right in between hair and accessories which I loved!

Q: What advice would "Mr. Divabetic" give to someone living with diabetes?
MS: Take it one day at a time and look for the win. If you fail, pin your goals and aspirations on something else and keep going. Don't let failure stop you, just focus on the next challenge.

A lot of women have a lot of shame and blame and put themselves last on the list. A woman comes to my program just beginning to realize she's 30 years older, 50 pounds heavier and she hasn't been happy for a really long time. We're so disconnected from ourselves these days it's easy to understand how you could wake up and say, "How did this happen to me?"

Q: Do you have any final thoughts?
MS: When I would see Luther go out on stage and see the love and adoration for him, it was fantastic, but of course you're always two steps away from it. Last year I was doing an expo in Pittsburgh and a friend said, "I have someone who wants to meet you." I thought it was a friend of his, but it turned out it was a young girl who just came to the expo to meet me. She knew my whole story about Luther, my family, my work. It was an incredible moment where I had to stop and realize what I had created.