As expected, the U.S. military quickly denied that the video released on Sunday by Al Jazeera is evidence that our troops proselytizing Muslims in Afghanistan, claiming that what was shown in the video was an isolated incident, and that the chaplains' statements were taken out of context.

Here's the official response from the Military Religious Freedom Foundation (MRFF) to the U.S. military: BULLSHIT!

If you haven't seen the video yet, here it is:

The video released by Al Jazeera is just one of countless pieces of evidence proving that our military is actively proselytizing Muslims in both Iraq and Afghanistan, and has been since the so-called war on terror began.

I've already written about a number of other instances of these incredible and blatant violations of CENTCOM's General Order 1-A, so let's see the military try to explain all this away.

Read in "The 'Great Commission' and Iraq" about the chaplain in Ad Dawr, who said:

I am able to give them tracts on how to be saved, printed in Arabic. I wish I had enough Arabic Bibles to give them as well.

the soldiers who are patrolling and walking the streets are taking along this copy, and they're using it to minister to the local residents," and that his "division is also getting ready to head toward Afghanistan, so there will be copies heading out with the soldiers.

Then, there were the Christian reality TV show missionaries who were allowed to be embedded with U.S. troops as journalists while proselytizing Afghans -- well, the military has lost all records of that.

We also have videos, like the one below of a chaplain admitting that Swahili language Bibles are being sent in to Iraq to evangelize the Ugandan workers employed by the U.S. military, newsletters from a plethora of evangelical ministries boasting of the number of Arabic Bibles and other materials they've been able to get into Iraq and Afghanistan with the help of our military, photos of these evangelizing materials, and many other videos, photos, and statements from military personnel verifying that what is shown in the Al Jazeera video cannot be explained away as an isolated, out-of-context incident.

The video below is from Soldiers Bible Ministry, one of the many organizations being tracked by MRFF that illegally ship Bibles in various languages into Iraq and Afghanistan. In the video, Army chaplain Capt. Chris Rusack boasts about getting the Swahili Bibles into Iraq, in spite of the regulations forbidding this.

Actually, they're in Baghdad right now. Somehow the enemy tried to get 'em hung up there. There was a threat they were gonna get shipped back to the States and all that. We prayed, and they're gonna be picked up in a couple of days. God raised someone up right there in Baghdad that's gonna go -- a Christian colonel that's stationed there in Baghdad, and he's gonna go and get the Bibles...

The "enemy" here would be a U.S. military member who was doing his or her job by flagging this shipment of Swahili Bibles -- a shipment that violated the postal and customs regulations prohibiting the bulk shipment into Iraq of religious materials contrary to Islam.

As you watch this video, keep in mind that Soldiers Bible Ministry is heartily endorsed by the Army's Chief of Chaplains, Maj. Gen. Douglas Carver, with this statement on their website: "Thanks so much for your invaluable ministry of the Word to our Soldiers."

Here's another of the many examples from MRFF's stockpile of General Order 1-A violations. The January 2009 newsletter of Worldwide Military Baptist Missions (WMBM) included these images of the English-Arabic proselytizing materials that they've been sending to our troops. 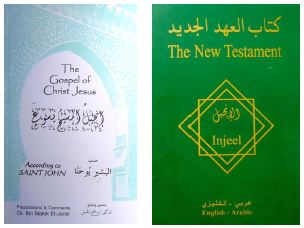 This was the caption:

In 2008, we shipped over 226,000 gospel tracts, 21,000 Bibles, New Testaments and gospels of John (to include English-Arabic ones!) and 404 "discipleship kits" to service members & churches for use in war zones, on ships and near military bases around the world.

As for the military's claim that the Al Jazeera video was taken out of context, well, Al Jazeera has released the raw footage to prove that it wasn't.