Amid the descent of the Iron Curtain, the Bay of Pigs Invasion, and the conflict in Vietnam lies one of the more bizarre moments of the Cold War - Soviet Premier Nikita Khrushchev's goodwill tour of the United States beginning September 15, 1959. While some may have heard of Khrushchev's failed attempt to visit Disneyland, many do not realize that this was just one of a hundred things that went wrong on this trip. From angry journalists to scandalous movie stars, the entirety of the visit was cloaked by barely concealed threats and marked by chaos - almost to the point of political farce.

Richard Townsend Davies discusses Khrushchev's less-than successful trip to Los Angeles and his time working on managing the press in 1959. A Pressing Problem DAVIES: Mr. Khrushchev made his visit to the United States and I was asked to work with the group of people who were handling the press. There was an enormous press party which accompanied Mr. Khrushchev around the country, and of course he was met at every stop by sort of double the number of correspondents and journalists who were traveling with him.

Everybody wanted to be involved in this trip, and even those journalists who didn't stick with the trip throughout wanted to be there for the major stops, because at each stop there was something very newsworthy: in Hollywood going to the sound stage where Can Can was being filmed, in San Francisco there was a meeting with [head of the United Auto Workers, UAW] Walter Reuther, with labor leaders, and I think Harry Bridges [head of the International Longshore and Warehouse Union, ILWU] was there.

And this was an extremely important milestone in the history of Soviet-American relations and would terminate with Khrushchev's first appearance at the U.N., so in Washington and in New York, nevertheless this trip was an enormous media event, one of the early great media events which were covered by television.

At the luncheon which Spyros Skouras (the President of 20th Century Fox) gave in Hollywood, where many glittering Hollywood stars were guests, you couldn't have 300 newspaper people in the room, so these 15 who were in the room were picked to be representatives of the various branches of the media.

But since there were -- I forget exactly how many events there were, but let's say that during the six days there might have been as many as 20 events -- not everybody could be a member of the pool, and that included people who were spending a great deal of money, whom the State Department was charging a lot of money to pay for the hire of the airplane in which they flew around from place to place, and for the provision of the accommodations which the State Department was responsible for reserving at each stop.

So this was an enormous logistical job -- a logistical and political job, because when a newspaper spent, let's say 5000, 6000, or 7000 dollars to send a correspondent around to cover Mr. Khrushchev, then that correspondent would say, "Now what is my boss getting for his 5-6-7000 dollars? I can't see or hear anything." 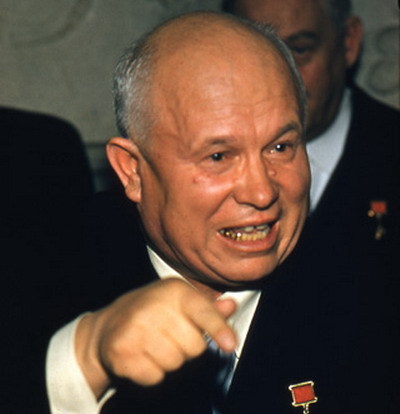 The first trouble began on the trip up to Hyde Park, where he was supposed to go and lay a wreath at the grave of President Roosevelt. President Roosevelt of course was honored, so to speak, in the Soviet Union, he was a great friend of Russia, and if he had only lived, if he had not died everything would have been honky-dory, and so forth.

So he went up there, and Eleanor Roosevelt was there and received him at Hyde Park, and the trouble began right there. The trip had only just begun. This was the first day of the trip, and the question arose as to who was going to be in the pool, because there was a motorcade organized by the New York State Police - the security was extreme of course - and there was a press car, or maybe two, in which the pool would ride.

But there just wasn't room for everybody. People were fighting to get into these station wagons. It was not well organized.....

We went directly from New York to Los Angeles. This developed on the way from the airport to the hotel where Khrushchev was staying -- Khrushchev said he wanted to go to Disneyland.

There was also a rather controversial sheriff - a sheriff or chief of police in Los Angeles - who was in charge of the local security who said, "No, we can't do that quite properly," and who said, "Look, your security man, General Serov, who was the head of the KGB, was here on the advance trip, and we discussed this, and General Serov vetoed it."

[He vetoed] going to Disneyland, because it would require closing Disneyland a day ahead of time, and then sending hundreds and hundreds of people in there to search it and make sure that somebody was not hidden at the top of a Ferris wheel or someplace with a high-powered rifle waiting to shoot Mr. Khrushchev when he came in. So General Serov himself had vetoed it, he had agreed that this would be impossible.

But Khrushchev made great publicity about this, and he was attempting, in what I regard as typical Soviet fashion, to put the Americans on the defensive, and Henry Cabot Lodge -- in this kind of head-to-head confrontation with this very shrewd peasant, this very rough infighter -- it took [Lodge] a while to figure out that he was being attacked, but he was, you know. Initially, he thought, well, he really wants to go to Disneyland.

And maybe for all I know he did. However, my perception of it was that this had been worked out rather carefully, and it was a ploy. "Let's say that you want to go to Disneyland. They of course will say, "No, it's impossible," and then you have already established your position as a demandeur, whose reasonable request, so far as the American people -- the American people will say, why sure, of course, everybody wants to go to Disneyland...It's a free country." So that was the first thing that happened.

Khrushchev Kicks Up His Heels 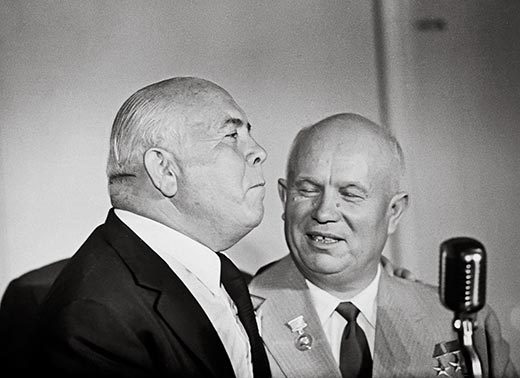 Well, at the lunch Spyros Skouras of course made a very impassioned speech: he was a Greek immigrant boy who came here with nothing, he spoke with quite a heavy Greek accent, and he preached at Mr. Khrushchev about how America was the land of golden opportunity, and here he was, a little Greek peasant boy whose family had fled from Turkey before the wrath of the Turks immediately after the First World War, and who eventually had come to the United States, and they didn't have a penny with which to bless themselves, and now here he was the Chairman of 20th Century Fox.

There were several other speeches in like vein, but Spyros Skouras's was perhaps the most aggressive. It was well meant, but of course there had been no advance planning, and nobody had said to Spyros Skouras we want to handle it this way or that way. But I don't think it would have made any difference if they had said that, so unorganized or disorganized we were.

It was after that lunch that we went to the Can Can sound stage with Shirley MacLaine, and so far as I could see everything there was great jollity.

I think Mrs. Khrushcheva was not exactly enchanted....She was not quite aware of what this was, and here were these very scantily dressed, charming young ladies prancing about in a fashion which in the Soviet Union with its prim and proper ways would have been regarded as pretty daring, if not actually obscene almost. 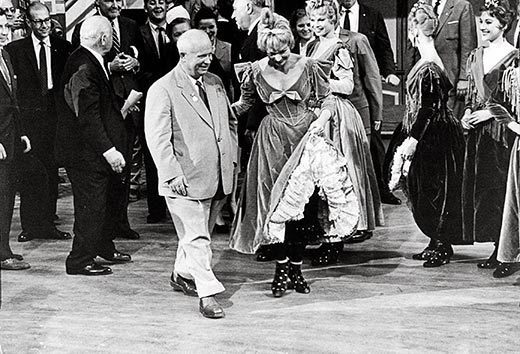 So she was not quite pleased by the whole thing - it was evident - but Nikita Sergeyevich Khrushchev appeared to enjoy it.

Khrushchev then chose this occasion to drive home -- to cap the psychological effort that he had begun earlier with the ploy about Disneyland, and it was then that he threatened to go home, and he enumerated all these things.

First of all, the Mayor in greeting him had been rude, which was not a bad description. But he said to the Mayor, "If this is what you call your capitalist manners, your good manners and hospitality, I want to tell you that we Russians have a different conception of hospitality. When Mr. Nixon came to our country of course we knew that he was not a friend of ours, but we received him properly and correctly, and nobody insulted him." And then he referred to this obscene spectacle, an affront. He portrayed it as an affront, and in effect said, "You know, Mr. Skouras' speech was an affront, lecturing me as if I were a little boy."

And he took the pose of one who had been offended, and he was indignant, that he had been invited here by the President, but if in fact it were the case that he was not welcome, he would get on the plane and go right back to the Soviet Union.

Well, needless to say this sent a tremor -- a tremor! -- through the assembled dignitaries. What does this mean? It's very threatening.

I don't know that the President telephoned Khrushchev directly because they had no common language, but through Henry Cabot Lodge the President conveyed his apologies. In other words, Khrushchev had succeeded in putting us in a corner quite adroitly, very well, utilizing our own mistakes.

It was a comedy of errors, which however had more serious overtones....