A cross-dressing bandit pulled off a bank robbery in California last week, armed only with a maverick sense of style. Now, police are asking for the public's help to bring him to justice.

Cops in Santa Cruz are calling the bandit "Mrs. Doubtfire," after Robin Williams' famous fictional nanny in drag. The suspect allegedly hit a U.S. Bank in Santa Cruz around 3 p.m. on Friday, April 3, wearing a blond wig and glasses. 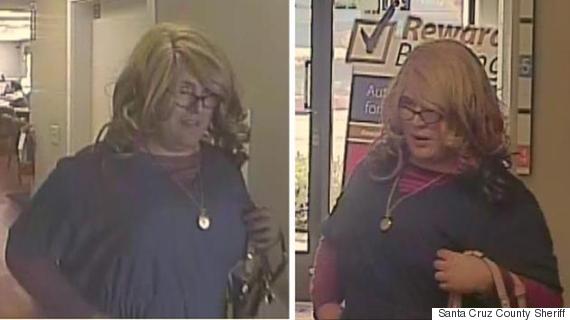 Police said the suspect was wearing a wavy blond wig, prescription glasses, navy blue scrubs and a light purple long-sleeved undershirt when he handed a note demanding money to the teller.

Security video from the bank shows the alleged robber in full garb. As Gawker points out, that moniker has been applied to other alleged robbers who've worn wigs on jobs, but none so fabulously as this guy.

Police said the same suspect was reported in the vicinity of a different Santa Cruz bank about an hour before the robbery, and is believed to have been "casing" it as a potential target.

The suspect didn't appear to be armed. No one was hurt in the robbery.