During a National Nurses United (NNU)-sponsored march from Lafayette Square and the Treasury Department to the #OccupyDC encampment in McPherson Square on Thursday, I got the chance to talk to NNU member Tonya Moss, who came more than 1,000 miles to protest Wall Street's outsize power over our political system.

I met Tonya Moss as the crowd made its way through McPherson Square. Tonya was a slight ginger-haired woman with a big smile, walking in NNU red. I wanted to know who Tonya was, and why she came. 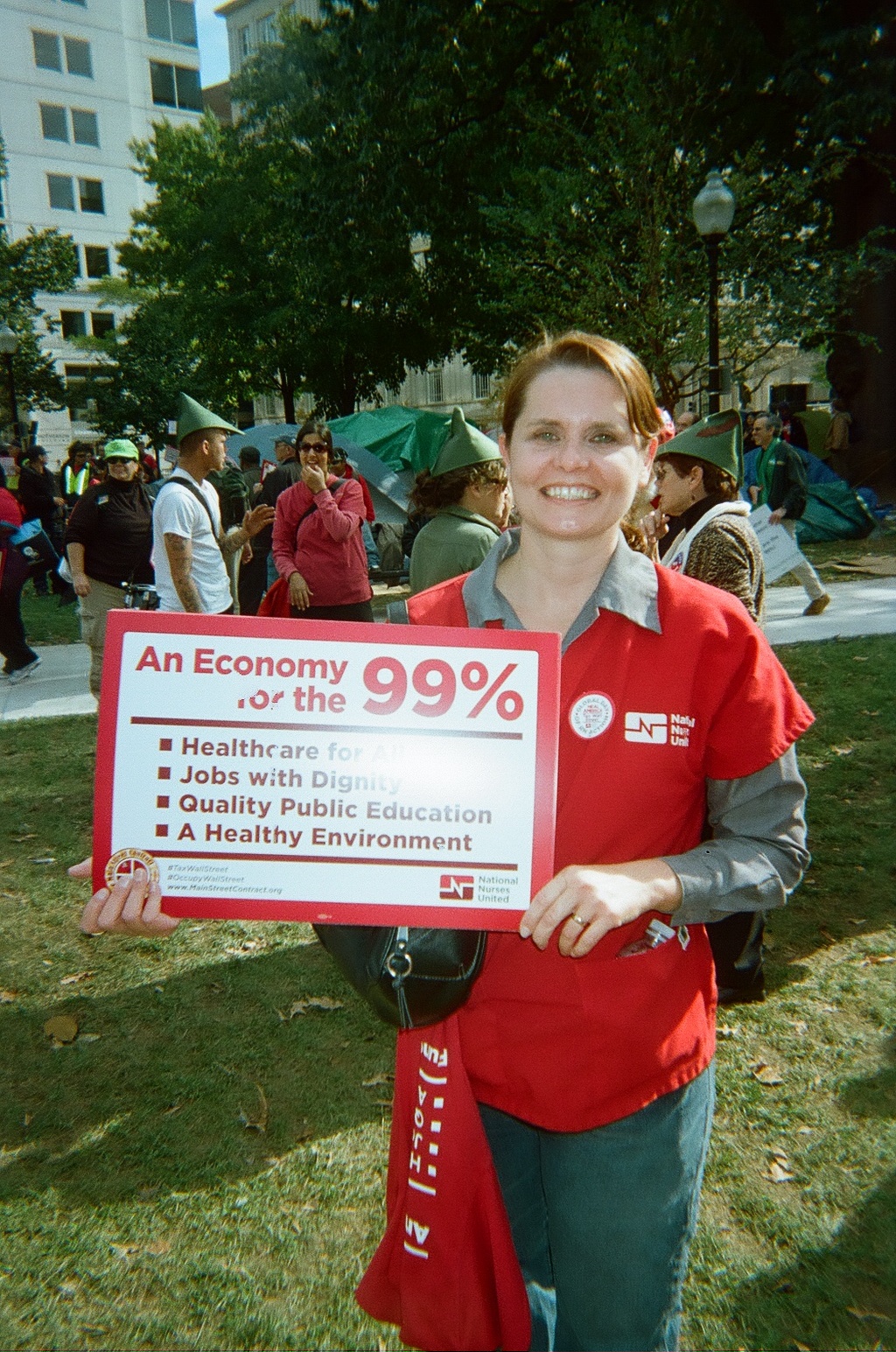 I learned that Tonya had flown into DC earlier that day from her hometown of Northern Minnesota -- 1,318 miles from Washington, D.C.

When I asked if Tonya had come with a group of nurses, she just smiled and shook her head. "As far as I know I am the only one from my town. I heard about it through the Minnesota Nurses Association" -- a local NNU affiliate.

When I spoke with her, Tonya did not yet have sleeping accommodations for the evening.

When Sanford bought North Country Health Services, they tried to cut the health care and pension benefits of the hospital's nurses. The nurses got to keep their benefits, however, when they threatened to go on strike, according to Tonya. New hires will have to accept reduced health benefits and 401(k) plans, in lieu of defined-benefit pensions.

The Northern Minnesota area has been hit hard by the economic downturn. Tonya's hospital has closed an entire floor as a result of a decline in the number of patients that frequent the hospital

The hospital serves an area with large numbers of uninsured or impoverished people, including many members of neighboring Native American tribes.

"I'm here because too many people don't get the health care they need," Tonya said. "I'm tired of watching people die because they can't afford basic care."

One of Tonya's patients is a woman in her late fifties with a condition known as "brittle diabetes." "Brittle diabetes" requires a more expensive kind of insulin than regular diabetes. The patient recently moved back in with her family in Minnesota after being laid off from her job on the West Coast. Since there is a 6-month waiting period to qualify for Minnesota-state Medicaid, the woman does not yet qualify for its coverage.

As a result, the woman is unable to afford the special insulin treatments, which Tonya said cost about $500 a month. She is frequently rushed to the hospital for emergency treatment. Tonya said the woman is dying a slow death without health care.

"Wall Street helped get us into this mess, so they should help get us out," Tonya said. "People are blaming the wrong people -- public workers and the like -- when they should really be looking at who was responsible for the economic crisis."

While the economic situation in Northern Minnesota remains precarious, Tonya is happy for what she and her family have. After years of service, her husband finally earned a full-time post as a facility manager for the state of Minnesota. Their son works as an electrician in North Dakota. Since locals have flocked to jobs in the burgeoning oil industry, Tonya said, more standard blue-collar jobs in construction and electrical work have become available for Minnesotans.