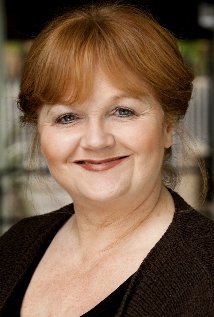 When Lesley Nicol calls me "Dahling," I completely melt. With her velvety English accent, fair complexion, and twinkling blue eyes, she's like something out of a Dickens novel. I find myself yearning to don a parasol and sip tea with pinkie raised in a garden somewhere. I listen attentively as she tells me her life story, which is testament to the notion that in many ways, life just keeps getting better as we grow older.

"I'm not a believer when people say you're in this box, and you can't do this or that," Nicol says. "They tell you, 'You're over 45, so there are no parts for women.' Shut up! Things happen! I actually have the best part I've ever had on television, and it's become a global hit"!

Nicol plays Mrs. Patmore, the crusty, one-lining (but secretly tenderhearted) head cook on the mega-hit PBS show Downton Abbey. Nicol is an accomplished actress with dozens of roles in the British theater, television, films, and commercials. Her credits date back to the 1970s, but it's only in recent years, with her role on Downton, that Nicol has found the wide visibility that she enjoys today.

"If I'd come to the U.S. ten years ago, nobody would have taken a meeting with me," she says. "Now, the access I have feels almost surreal."

Nicol attributes Downton Abbey's success to a mixture of good writing and a well-cast group of actors. "It's not some sort of tight-ass British period drama. It's relatable, and it touches people of different ages and ethnicities."

The creator of Downton Abbey, Julian Fellowes, devotes impeccable attention to detail -- much like the house staff that he writes about. Apart from the hugely skilled costume, make-up, and art departments, the show also has a historical adviser on set, so that the period details are as accurate as possible. "He keeps a close eye one the finer points of behavior as well as the running of the house itself in the 1910s and '20s," explains Nicol.

Nicol's character, Mrs. Patmore, is short-tempered and saucy, relentlessly barking orders at the other servants. Much of her angst is directed at Daisy, played by Sophie McShera, who scurries around the kitchen trying to avoid Patmore's wrath.

"Actually, in real life I'm not a particularly good cook. I make sure I don't do anything too technical on screen," Nicol claims.

Her off-screen demeanor is far from that of the character she has become known for; still, much of the inspiration behind Mrs. Patmore came from Nicol's own personality. "Mrs. Patmore and I have a similar sense of humor. I'm not as sarcastic as she is, but we're both funny."

Julian Fellowes wrote great characters, and then he let the actors add dimension to them. "When he originally wrote Mrs. Patmore, she wasn't very funny," Nicol explains. "But because of the banter and humor I share with Sophie, the cook's sauciness came out as he developed their relationship."

As Nicol began to craft the character of Mrs. Patmore, she received some helpful advice from her good friend and mentor, English actress Anne Reid.

"Sometimes actors equate incorporating thinking, backstory, and a lot of effort with doing a good job. Anne said to me, 'Do not complicate this . . . try to find where you and she are legitimately similar, and let that be enough. You'll bring so much color to her without even knowing it.' "

Reid's advice paid off. Nicol seamlessly inhabits her role as though she were born to play this feisty woman. (She was, in fact the ONLY actress who was asked to read for the part.) Watching her navigate the kitchen as the bossy cook, you'd never know that as a girl, Nicol was painfully shy.

"Going into a roomful of people was pure torture. I couldn't even speak." When Nicol was 11, she somehow mustered up the courage to get up on stage and read a comedic poem. "I remember that moment so clearly," she recalls. "It was as if a light bulb had gone on in my head . . . I could actually make people laugh! It gave me confidence I had never experienced in my life, and I was hooked!"

It's with this kind of fearlessness that Nicol continues to live her life, refusing to be put in a box or play by anyone else's rubrics. "I do not like the way people make up rules for us in the world. When I met my husband I was 51 and had never been married, and people said, 'Oh well, you won't marry now, because you're older.' I say, 'Balls to that!'" She has been happily married to her husband, Da'aboth, a Reiki practitioner, for the last eight years.

"Don't say to me that older women don't feel flattered if somebody is flirty with them or shows them some attention. I don't believe that ever goes away." Nicol felt so strongly about this that she lobbied for Mrs. Patmore to have a love interest. "It wouldn't take much for a woman of that age, at that time, to be in a flutter." Nicol saw the potential for her character's romantic yearnings as being a mixture of funny and touching. Julian Fellowes agreed and wrote the tale, resulting in some of Nicol's proudest moments.

The Downton cast and crew have just began shooting the fifth season, which, for Nicol is like coming back to a big family.

"I have been working as an actor for 40 years. I love my job as much now as I ever did. If this success came to me at 20, I suppose it would have been lovely . . . but I was still incredibly immature at 20, so I wouldn't have known what to do with it!"

Nicol grows pensive when she ponders what will be next in the ever-changing landscape of her life.

"There ARE good parts for women later in life, and I want to work until I drop! I've come a long way, and I don't take anything for granted at this point in my life. I'm very aware of my good fortune, and I'm happier in my skin than I've ever been."

As our conversation draws to an end, I'm inspired by Nicol's story, and (in a Matthew McConaughey moment) I ask her what advice she would give to that painfully shy little girl of 50 years ago. She laughs and says, "I would tell her to be brave. It will get better! And Oh My God...did it ever get better"!

This article was originally published by womensvoicesforchange.org