This is the twentieth installment in HuffPost Gay Voices Associate Editor JamesMichael Nichols' 30-part series "After Dark: NYC Nightlife Today And Days Past" that examines the state of New York nightlife in the modern day, as well as the development and production of nightlife over the past several decades. Each featured individual in this series currently serves as a prominent person in the New York nightlife community or has made important contributions in the past that have sustained long-lasting impacts.

The Huffington Post: You hail from Australia. What did your journey to becoming a fixture in the NYC nightlife scene as an artist and designer entail?
Claire Fitzsimmons AKA Ms. Fitz: My journey into nightlife segued through the fashion industry. I worked as a stylist and and art director and although my work was very creative, I had a hard time monetizing it because my portfolio was so off the wall. I did a lot of editorial and video work but the brands with the dosh [money] couldn't trust that I wouldn’t take a shoe and pull the tongue out and make it into a hat, or cast a plus-size female model with facial hair -- or something. So I had limited options for my career in Australia [laughs]. I moved to New York City to explore my dreams of entering into the fashion and art world and finding a niche of likeminded freaks.

Even back home it seemed to me that the most creative people in the world were congregating in the clubs of New York City. They were the ones I read about in Fabulous Nobodies -- they worked with Pat Fields, they were door girls, they were friends with Leigh Bowery or were part of the Club Kids. I was drawn like a magnet to the mythology of the scene. In my mind, the art scene, the fashion scene and New York nightlife were the same thing. It never occurred to me that they might be anything but completely intertwined.

I arrived in New York in 2009 and the scene I had imagined was not what it had once been -- it was the middle of the recession and the late 2000's were not kind to NYC nightlife. I retreated to the Internet and began posting my looks in colorful gif format on my style blog. That was during the period when having a style blog could still be a "thing." Through that online exposure Susanne Bartsch and her assistant Joey Labeija hired me for my first gig in 2012. I was also working at Paper Magazine as an event producer at the time and everything kind of just fell into place.

How does your work as a fashion designer and stylist intersect with your role as a prominent person in nightlife?
My background as a style artist means that I use my body and my clothing as a statement and expression of my art, and that’s a medium that translates well in the nightlife environment. I work very hard on my looks for events. They are primarily custom-made and there is a character that I'm building or creating. In nightlife you're only as good as your last look -- and I take that as seriously as one can (while there are still wars and people dying of hunger in the world).

How do you view the spectrum of work that you produce? What tends to be the focus of your work?
My art work is still primarily fashion-centric and motivated by my obsession with style as a tool for expression and dissent. I studied Political Philosophy at University and I'd say that I'm a feminist artist who uses fashion to create a vocabulary. I like to consider the intersection between subverting personal style, fashion-as-branding and artistry. Technically speaking I work with a lot of color and patterns -- mostly thats a personal preference -- but I also think that color and humor are great tools for sticking it to the man; which is ultimately what I'm trying to do.

You won the title of "New York's Best Nightlife Personality" at the Annual New York City Nightlife Awards in 2012 -- what was your career and role as a nightlife personality like at that time?
Let me preface this by saying that my friends and family back home are baffled that this is even a real award, and also very impressed and bemused that I managed to wrangle such a fabulous/dubious title!

At the time I had been thrust into the scene with Susanne Bartsch and was also working with Lady Fag, was helping throw the Dizzyland parties with my good friend Trey LaTrash and also was doing Frankie Sharp's Westgay parties. I kind of had it all going on and was loving being in the thick of it -- and that award really topped off the experience.

You were recently asked to curate a showing at Superchief Gallery during New York Fashion Week. How do you feel like fashion intersects with the art world?
Fashion and art are the same thing to me, just different incarnations. I aimed to curate a show during NYFW that brought together the current zeitgeist in art and fashion -- which I believe are net-based artists creating their own clothing and art that incorporate ironic statements on commercialism. Themes that I personally find endlessly interesting in relation to the fashion world are brand obsession, consumerism and celebrity worship, so I created works that explored those themes. My piece for the “Limited Edition” show is titled "ICONS" and featured beautifully constructed remakes of iconic celebrity red carpet looks from repurposed sportswear. 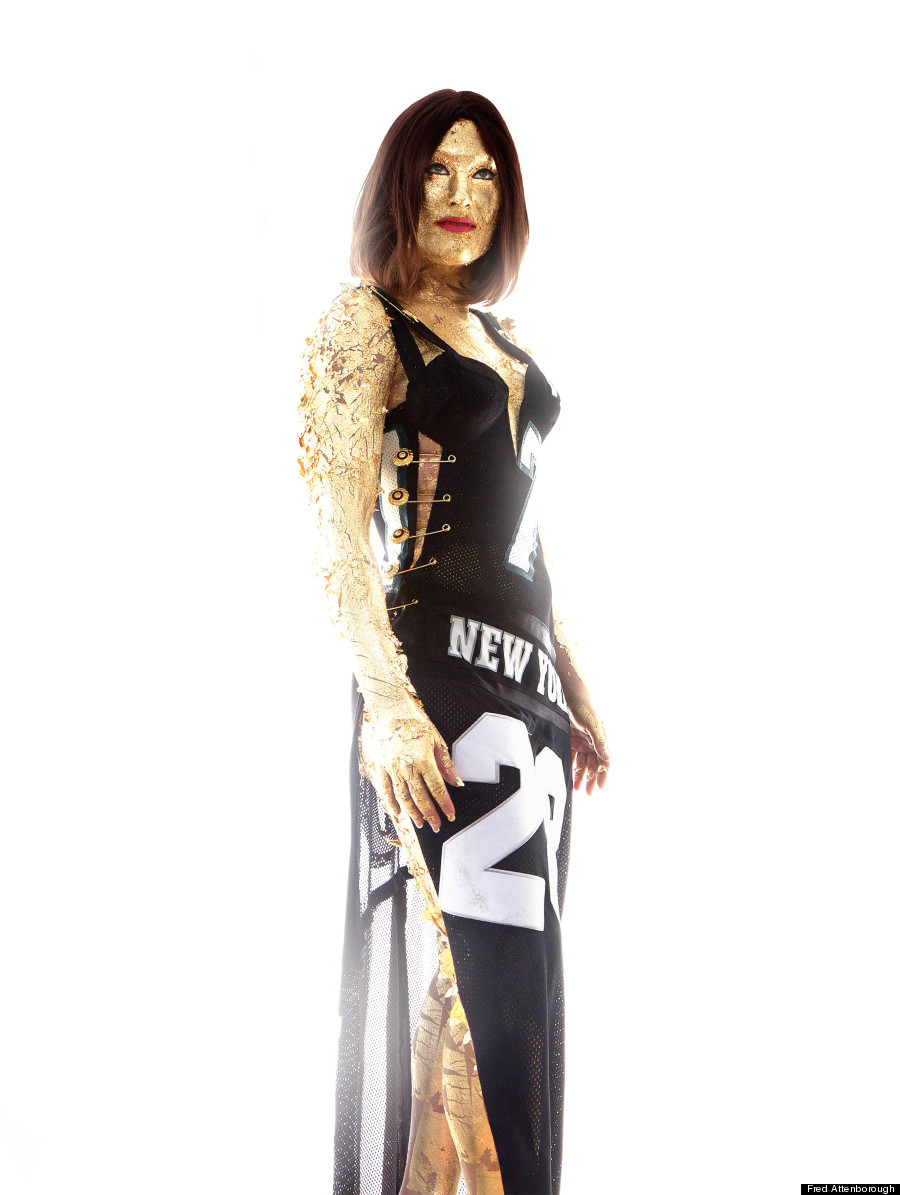 How has the Internet influenced your development as an artist and designer, as well as your work?
The Internet has been central in influencing and disseminating my art. We live in a time of the Wild West of the net; it's largely unregulated and we can share information freely. I don't think it will always be that way and we are lucky at the moment. I find it kind of ironic and a really interesting statement on the human condition that we use this mind-blowing opportunity for dissent and communication to take #selfies and make people famous on Instagram for their butts. I'm not saying there is anything wrong with it -- I'm just super inspired by the concept of digital narcissism, specifically pertaining to women's rights and feminism and how we see and sell ourselves online.

The most significant way that the Internet has changed the world of art is primarily in the medium, and less so the content. Artwork that exists only online or digitally is a difficult sell and nobody really knows how to make money off of it -- and mostly people give it away for free. It's much like when music went digital; nobody knew how to monetize that either. I'm looking forward to hearing about new platforms for sharing, downloading and purchasing digital art.

The Internet is also changing the face of fashion, primarily in the method by which people are exposed to it and consume it. People want to purchase instantly and online nowadays, and this certainly wasn't the case in years gone by. There used to be Fashion Weeks where only editors and buyers could see the new collections, then six months later the items would hit the stores. Now consumers view the collections at the same time as industry and the items need to be ready to be purchased instantly with a click. It's changing the production, the marketing and sales schedules dramatically, and will eventually overhaul the way the industry works.

The artist and fashion brands who can adapt to these changes are young, smart and tech savvy, and they are flocking to digital spaces to share ideas and goods. Our generation has been burned by the financial crisis, unemployment and bleak prospects and, consequently, the ideas that are valued and being shared right now are anti-commercial and community driven.

How do you see what is happening in nightlife today as building on a historical legacy of artists, performers, musicians and personalities over the past several decades?
I think it's essential to know your history and understand the legacies of those who came before you, regardless of your field. I love being regaled with history from my friends who were part of the Club Scene in the 90’s and have been lucky to work professionally with a number of the pioneers, including Desi Monster, Zaldy and the Paper Mag team. I get cranky when some children don’t bother to learn about the artists who paved the way for them!

New York is currently seeing a second wave of nightlife and it’s happening in raves and warehouses out in Brooklyn. It’s similar in many ways to the first wave. I mean, we’re still broke artists dancing around in dark rooms wearing stupid outfits. But particularly in regards to fashion, I think the queens seem more colorful and garish -- and there's also a cyber street style element that wasn’t so prominent in the first wave.

What current projects are you working on?
I’m currently in the early stages of producing and curating the second annual “Bushwick Gone Basel,” which is a gallery group show in Miami Basel. We’re partnering with Brooklyn venues and galleries to bring the brightest, talented underground artists from our neighborhood to Basel who might not have the resources or connections to have their own show at the festival. If you’d like to be on board to help or support, hit me up!

What do you see as the future of nightlife in NYC, particularly in terms of the way that it intersects with fashion?
Fashion has always drawn from the underground for trends, and in terms of the future of nightlife and fashion in NYC, increasingly we see established labels who want to connect with a cool young aesthetic (like DKNY or Diesel under the direction of Nicola Formichetti) reaching to the scene for inspiration and muses. Its a mutually beneficial understanding, if the artists are compensated appropriately. I think we’ll see more of that -- it’s an exciting time to be involved.

For more from Ms. Fitz head here to check out the designer's website. Missed the previous installments in this series? Check out the slideshow below. 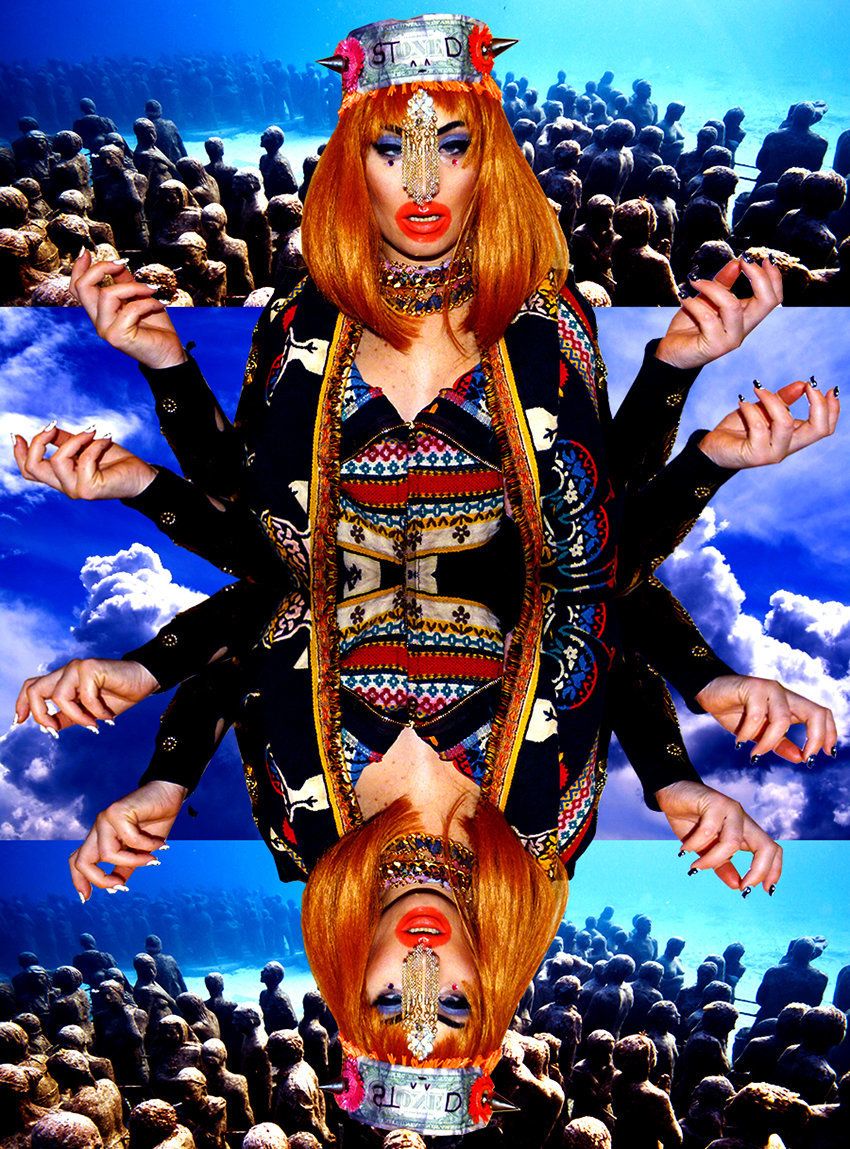