Short in height, Messi's magic was seen in Argentina. At a mere age of 8 years, Messi was hired by Nibel World Boys. However, he didn't grow in height until the age of 11. Messi's height was great concern for his father and mother who were working as manual laborers at a factory. River Plate was interested in hiring him, but the club wasn't in a situation to spend $ 900 each month.

Although Ronaldo was able to win the award over Messi in 2013 and 2014, it has become almost certain that Messi will win that award this year. If he wins this year's award too, he will establish the record of winning it for the fifth time. He isn't competing with anybody, it will be him breaking his own past records. He will establish the record of winning the award for the fourth time.

R. Carlos was very much inspired by Messi's style of playing football. R. Carlos had already become the sporting director of Barcelona by then. After completing his trial in Barcelona, Spanish Football Group began medical treatment on him and brought him to the academy. After that, Messi began running for the goal of becoming best footballer making his residence at the academy. According to his parents, Messi was interested in football since his childhood. 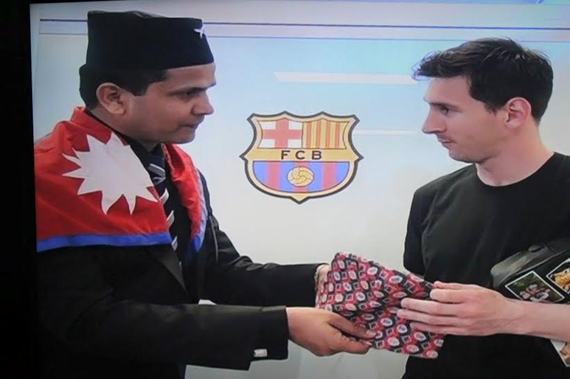 Nepali journalist Kiran Marahatta arranged this meeting with Leo Messi to Nemar. Barcelona club invited him as a top journalist from Nepal to make a documentary. He did difficult tasks like making documentaries to taking Nepal to the world famous athletes. Kiran says "Thinking of those moments, I believe that our lives have become successful."
Messi is the really great player. He spent his 10 precious minutes for the interview. Kiran Marhatta is the first South Asian Journalist to interview Messi. He stayed 11 days at the Barcelona Football Club.

Kiran says, according to their schedule, I had to finish everything within 11 days. They were ready to bear my expenses for this. After a wait of three hours, Messi entered the room. I was speechless for a while. I couldn't believe that he was in front of me. Then he said, "How are you?" I gifted him a Nepali Dhaka Topi (Cap). He looked at the cap carefully. "Thank you Nepal. This is the most unique gift from Nepal. I will keep this very safe," he said. 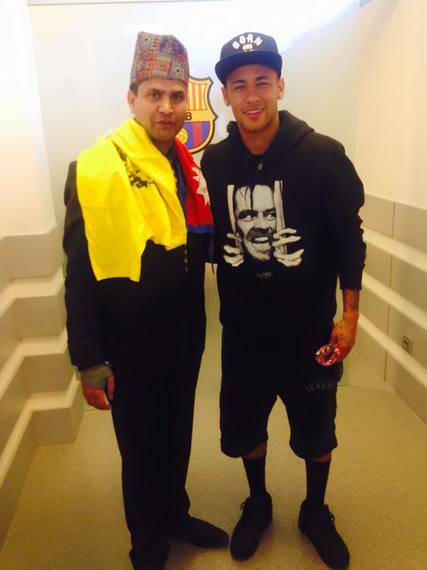 Messi remembered Mt. Everest when discussing Nepal. Kiran Marahatta acted as a bridge in strengthening relationship between Barcelona and Nepal. Messi is himself great, but will rise up like the Everest. Always standing tall and strong.

Kiran Marahatta interviewing Lionel Messi at Camp Nou is one of the rarest moment for a Nepali journalist. Just before the destructive earthquake hit Nepal, Marahatta met the Barcelona team, which is fighting for the title of Championship League, Spanish League and Kings Cup.

Marahatta who went to create a special documentary on Messi and Barcelona team was able to gift Nepali hat to Neimar, Gerard PK, Raytik and Club Captain Xavi Hernandez.

Making reference to Messi Marahatta said, " This is a very different form of gift up to this moment. I shall preserve it. I am extremely glad for the hat. This has brought our relationship to a higher level. I shall definitely step into Nepal someday." Marahatta also got Messi to sign a T-shirt with Buddha's photo. Gifted by ABC Television staff Marahatta, the Nepalese flag is flying high over the home-field of Barcelona team after they attained victory of 3 titles in a single season. World's renowned football players have accepted Nepali Dhaka Topi as a gift and have expressed their wish to visit Nepal. This is the matter of national pride. This incident is itself a great news in the world stage.