This is why Bitcoin can't have nice things.

The unregulated digital currency beloved by techies, libertarians and the Winklevoss twins is having a crisis moment that could end its hopes to ever be accepted as a legitimate currency. Its busiest online exchange, Tokyo-based Mt. Gox, has been frozen for days, amid rumors that hackers have stolen maybe $350 million worth of Bitcoin wealth. The price of one Bitcoin has collapsed to about $500 on a rival exchange, Slovenia's BitStamp, down from about $1,100 last December, according to Bitcoin tracker Coinstackr.com (story continues after Coinstackr chart). 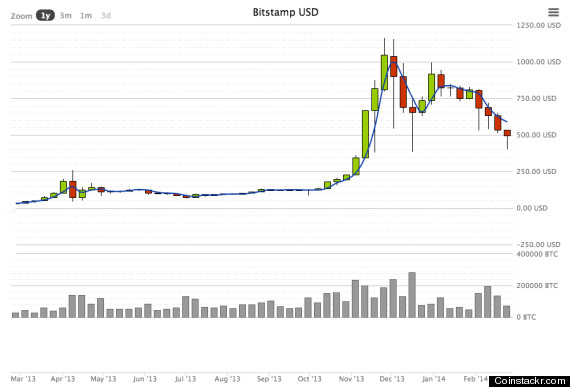 After going silent for several days and erasing its Twitter history, Mt. Gox -- which is short for Magic The Gathering Online Exchange, believe it or not -- posted a statement to its website Tuesday morning:

In the event of recent news reports and the potential repercussions on MtGox's operations and the market, a decision was taken to close all transactions for the time being in order to protect the site and our users. We will be closely monitoring the situation and will react accordingly.

The statement did almost nothing to clear up the mystery of what has happened to Mt. Gox or its customers' money, but it's not a good sign. Bitcoin blogs have been passing around a document called the "Crisis Strategy Draft," supposedly an internal Mt. Gox memo that says 744,408 Bitcoins have disappeared, in a "theft which went unnoticed for several years." The document includes plans to "step away" from Mt. Gox CEO Mark Karpeles, who has essentially disappeared, and to re-launch itself under new management and branding, in an effort to restore confidence in Bitcoin.

"At the risk of appearing hyperbolic, this could be the end of Bitcoin, at least for most of the public," the memo says.

There's no telling whether the document is legitimate or not, but it's certainly right that this episode could be the end of Bitcoin. The Mt. Gox debacle has justified the worst fears anybody might have had about jumping into Bitcoins -- namely, that your digital money can be hacked and stolen just like your identity or any other digital property. As Quartz noted, this would not be the first time Bitcoins have been stolen.

Several Bitcoin powers-that-be distanced themselves from Mt. Gox, saying they always thought it was a risky place to hold Bitcoins and promising to "collaborate with other industry leaders to establish better controls to ensure that events like this are not repeated." Gigaom's Jeff John Roberts suggested wealthy Bitcoin owners/proselytizers like the Winklevoss twins might be intervening in the market to stop Bitcoin's slide, acting like the Federal Reserve or something.

But the reputational damage is done, coming hard on the heels of wild swings in the currency's price and other recent public Bitcoin controversies. Those include the shutdown of the Silk Road online exchange and the arrest of Charlie Shrem, vice chairman of the Bitcoin Foundation and a recipient of millions of dollars in funding from the Winklevii.

This is no way to run a currency. If you weren't already convinced that Bitcoin was a risky gamble, this should just about do it.