There was a time when sending a tweet from church would have been taboo, but now with so many churches connecting digitally, it's more commonplace. That doesn't mean we're good at it, though; in fact, much of the mingling of social media and religion can be pretty sloppy. Between the random scripture quotations, the bible-beating debates, and the punctuation-free paragraphs/sermons, much of the God-talk on the Internet could use a tutorial.

Rev. Run has figured this out. His 4.5 million Twitter followers is more than any other Christian minister (*to highlight this, as of publication, Joel Osteen has 4.2M followers; TD Jakes 2.1M) and for years @RevRunWisdom was one of the most retweeted accounts on Twitter. Joking-but-serious: there was a time when social media consisted of two things: 1) pictures of food; and 2) Rev. Run quotes. It is fair to say anyone giving inspiration through social media is following the pioneering steps of Rev. Run. 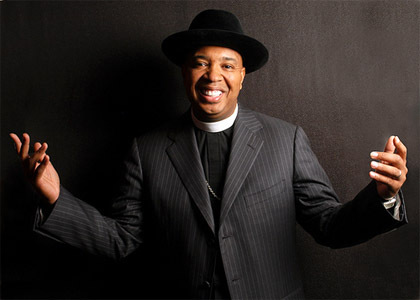 So when the hip-hop icon (or, depending on your age, the reality show star) came to Chicago to help promote AT&T's "Inspired Mobility" campaign, I got the chance to sit and spend the day with him. Inspired Mobility is a national conversation about the intersection of faith and technology. As a young pastor and emcee, I wanted to talk about the general frustration and anxiety that many well-intentioned folk have when using social media, what makes him so effective, and know his own rules for posting, talking justice, etc. Class was in session.

About the Private Life on Social Media... or Not

When I asked Rev about the transition from music to now using his private life as his primary platform, he immediately sat straight to reframe my question:

My private life is not the reason for the platform. When I went into (the MTV reality show) Run's House, the primary reason was ministry. We were coming home from church one day and I said, "We're doing a reality show." So the family knew coming in, and it was no longer private. MTV was my pulpit. The cooking show (Rev. Run's Sunday Suppers on the Cooking Channel) is my pulpit. The travel show (Rev. Runs Around the World on the Travel Channel) is my pulpit.

In all of this, the point is clear: there's a difference between a private and public life, even when private aspects of our lives are made public. Sometimes we forget the difference, and it gets sloppy. 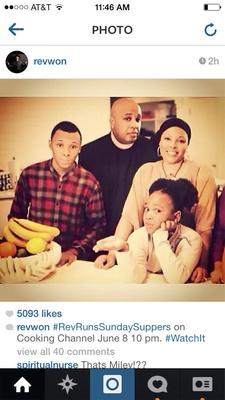 About Preaching on Social Media... or Not

You watch Kobe and Michael Jordan play basketball and they don't give lessons. You watch them. So, for me, going on MTV with a beautiful family I was hoping would inspire people. I believe in some ways it might have inspired Jay-Z to get married, Kanye to get married. I was giving you the visual, not bringing the bibles.

Ministers often hear, "The greatest sermon you can preach is your lifestyle," but does your social media presence reflect that lifestyle over more sermonizing? We live in dogmatic and polarizing times, and Rev. Run's social media presence does not choose sides but instead opts to show us his life - warts and all. It's refreshing, risky, and worth the consideration of many other celeb social media accounts that are basically ads.

About Blowing Up on Social Media... or Not

For many years I was the most retweeted person on Twitter. Nobody knew what to do with it (Twitter), but they were RT'ing #WordsofWisdom. It wasn't a conscious effort to be retweeted; it was saying, "I'm going through something, and you may be too. I'm going to tell you what I'm telling myself." But out of nowhere, people were coming up to me on the streets and saying, "Yo, you SAVED me with that word of wisdom. You SAVED me from suicide.

For most people, social media is an opportunity to build a brand and a buzz around your work (even the most noble work must serve the hashtag gods). But it's worth asking why you are on social media - the ultimate purpose - and letting the statuses flow from there. If you're there to engage with people, reply and actually talk. For all the ways Rev. Run has been able to capitalize off his Twitter presence, it began with a simple desire: to inspire others.

About Speaking on Justice... or Not

Probably my biggest takeaway from Rev. Run comes via a critique he's faced many times - being what some have called "silent" on issues like #BlackLivesMatter or other contentious topics:

To be clear, Rev. Run doesn't think we shouldn't talk justice. He just knows his role:

There are many people with stances that are SO NEEDED compared to the way I operate. I believe that if Russell Simmons (founder of Def Jam Records, and his biological brother) is fighting the Rockefeller Drug Laws in New York, there's a place for that, and there's a place for the inspiration I bring as well.

So it's OK to not be part of every conversation. It's OK to appeal to the voices of others. It's OK to be who you are. The point to take from Rev. Run is: be clear in that, back out when necessary, and remember that every opportunity is not your opportunity. His focus and discipline in that focus is what makes his social media presence so dynamic, and some of us could probably retool our accounts to better reflect our voice so we can better inspire others, whether we blow up... or not.