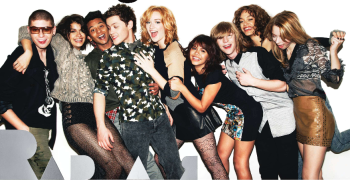 The Parents Television Council has asked the U.S. Justice Department to investigate whether Skins, an MTV remake of an award-winning British drama about high school kids, constitutes child pornography for its use of underage actors in highly sexualized scenarios.

I'm no fan of censorship, and the PTC historically has veered into histrionic territory with its protestations of shows such as That 70's Show, Will and Grace and Dawson's Creek.

Yet when it comes to MTV's Skins, I reluctantly concur.

MTV's version of Skins is, in my humble, vaguely nauseated opinion, repellent -- but not for the same reasons that the PTC and several advertisers, such as Taco Bell (which pulled its ads from the show), have judged it similarly.

Is it child pornography? If you seriously need to ask that question, the show is probably not ready for public consumption.

There is great debate about the definition of "pornography," exemplified famously by the 1964 U.S. Supreme Court obscenity case Jacobellis v. Ohio in which Justice Potter Stewart (in an attempt to define "hard-core pornography") said: "I shall not today attempt further to define the kinds of material ... [b]ut I know it when I see it."

Unlike the provocative and sympathetic characters in its U.K. forerunner, the protagonists of MTV's Skins are largely one-dimensional -- presented as if the most compelling part of their humanity is their fumbling sexuality. The UK's Skins featured complex, multifaceted characters, dialogue and story lines that rang authentic, exploring (with more than a passing glance) issues of mental health, family dysfunction, alienation, identity (sexual and otherwise) and even faith.

MTV's Skins is neither authentically sexy nor remotely soulful. Sex scenes are shot with fractured, breathy imagery -- a wandering hand or a craning neck here, open mouths and the small of a back over there. There's plenty of panting, groping and writhing, but the complete bodies -- and the complete personhoods -- of the characters are envisaged with the eye of an amateur cubist.

As the parent of an 11-year-old being reared in Laguna Beach (yes, that Laguna Beach, the Southern California town featured in the eponymous faux-documentary scourge that birthed the genre at MTV), it's not so much dangerous as it is deeply depressing.

Rather than titillate or horrify, MTV's Skins elicits a certain acedia -- a lingering spiritual listlessness or torpor that the ancients counted among the Seven Deadly Sins. But, it's not what the young characters are doing -- a lot of sex and drugs and laconic drifting -- that is the most unsettling.

The truth is that most American teenagers at least dabble in the same activities as the kids on Skins. Should we pay closer attention to their lives and hearts, get involved and encourage them to make better choices about their bodies, minds and spirits? Of course.

But what is most disturbing and, perhaps, most "dangerous" about MTV's Skins, is that the facile young characters are little more than objectified body parts meant to entertain us.

Reducing children to commodities -- to be traded for advertising dollars, market share or worse, sexual entertainment for adults -- is disgraceful.

After viewing the first two episodes of the MTV series, visions of relocating my only child to a sound-proof, WiFi-less, bubble-wrapped bunker in a remote Himalayan village until he turns 18 danced in my head.

My son is standing at the threshold of adolescence. Soon he'll fully cross over and take steps farther away from the safe harbor of his home and family.

He is beautiful. Strikingly handsome, charismatic, funny and kind. People are drawn to him. Strangers remark on his physical beauty at the grocery store. Girls have started sending him text messages (usually consisting of "Hi. Whatzup?") and asking to sit with him at lunch. He's definitely cute.

If I believed the only thing people saw or valued about my child was what they could see -- or if he started to believe that was true -- we'd be on the next flight to Kathmandu.

Thankfully, that's not the reality. He knows he is a unique, precious spiritual being residing in a physical body. He is surrounded by people who know that, too.

Frankly, I think most of us know that about each other. We are more than what we can see, touch, use or commodify.

Dehumanizing kids in the way that MTV's Skins does so ham-handedly is as tedious as it is crass. Ultimately, that won't sell.

The audience for the show's second episode plummeted from 3.3 million to 1.8 million viewers. Apparently MTV overestimated our appetite for flesh. Many of us hunger for more than just Skins.

A version of this column originally appeared via Religion News Service.