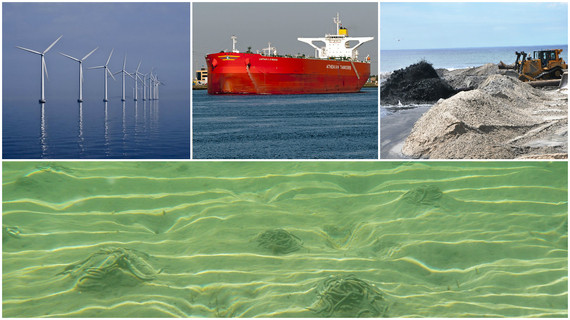 All too often, people regard muddy and sandy areas of the seafloor as ecological deserts: barren, featureless, devoid of life and readily exploitable. Real ecological value comes from coral reefs, seagrass beds, saltmarshes and mangroves. At least that's what we thought.

Then I joined fellow marine scientists in examining which aquatic habitats are most important to coastal fisheries, and discovered something surprising. Those seemingly simple, boring plains of sand and mud? By many criteria they came out on top. Indeed, in the waters off New England, birthplace of America's commercial fishing, 88% of the species considered in our study make some use of soft sediments, and 30% count these habitats among their most critical.

Clearly, there's more activity taking place in soft sediments than meets the eye. The surface area and intricacy of the millions of grains in a sand or mud patch makes these habitats look not so dissimilar to coral reefs. Nestled within that micro-scale complexity, organic matter (detritus), bacteria and other microbes, and small invertebrates generate considerable biological productivity. Larger sea creatures such as flounders, rays, crabs and clams take advantage of the plasticity of soft sediments, seeking refuge below the surface. These and other organisms add macro-scale complexity by the creation of feeding pits and burrows. Ocean currents, waves and tides create additional structure by sculpting soft sediments into gullies, ridges and waves.

Soft sediments provide important benefits for healthy fisheries, and preserving those benefits will require sharing and jointly protecting these precious habitats alongside three equally vital industries of the 'blue economy'.

Port access for the fast-growing, $200 billion maritime shipping industry often requires repeated dredging and deepening in soft sediment habitats. As Panama widens its famous Canal, ports will change the breadth, depth and frequency of dredging to prepare for more and larger vessels.

Offshore energy facilities are often sited on soft sediments due in part to the (somewhat misguided) perception of minimal environmental impacts. We need renewable energy sources, like offshore wind farms set for Rhode Island or Maine, to meet demand and curb global climate change. Yet, a truly green footprint will consider where these stand.

Indiscriminate growth in these sectors could strain the functional value of soft sediment habitats on which fisheries depend. Conversely, awareness of the surprising importance of mud and sand can unite stakeholders across the blue economy to secure protein, shipping, energy, and coastal resilience for decades to come.

Two hundred years ago, the poet William Blake urged us "to see a World in a Grain of Sand." Science is still unlocking the true ecological depths of his vision.

Indeed, the marine science community recently was thrilled to find a previously unknown coral reef at the mouth of the mighty Amazon, where it should have been "smothered by settling mud" from the river's "thick, dirty, plume." The discovery is unlocking new biodiversity and insights into how reefs might survive in a changing world.

But let us also pay attention to all that settling mud, for it holds secrets and surprises of its own.