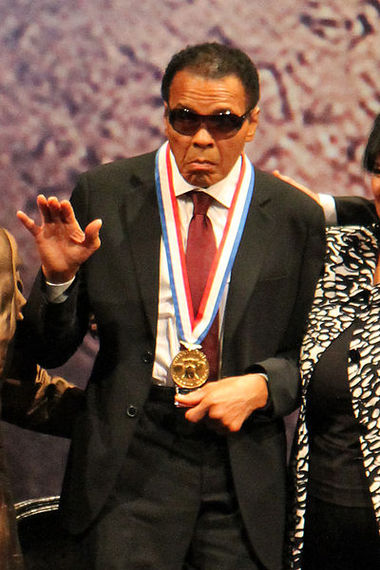 An extraordinary American Muslim peacemaker has died. Muhammad Ali, "the greatest," was an incredibly talented athlete. The trajectory of his life, however, also illustrates the profound relationship between faith and peacemaking.

Ali's faith-based opposition to the Vietnam War was enormously important to me personally as a young anti-war activist in the late 1960's, and to so many others of us in the movement struggling to relate our faith and our anti-war work. Though Ali spoke as a Muslim and I as a Christian, I learned this lesson:

Justice and peacemaking requires spiritual strength to sustain you for the long haul.

And long haul it has been for this great Muslim peacemaker. Even this year, Ali was speaking out against Donald Trump and his misbegotten ideas of Islam and violence and his call for a "ban" on Muslims entering the country.

Peacemaking is often profoundly misunderstood as quietism, as the absence of conflict. But in its deepest sense, peacemaking is inextricably connected to justicemaking and so, in fact, must be engaged with the conflicts and even the forces that produce the violence of one's times. This is the basis of the Just Peace paradigm, and if you read through the Muslim sections of Interfaith Just Peacemaking: Jewish, Christian, and Muslim Perspectives on the New Paradigm of Peace and War
you will recognize the resonance with Muhammad Ali's multi-faceted approach to peace and justice.

Ali was no pacifist; both his particularly creative and poundingly physical approach to boxing and his statements on what wars he could consider justified make that distinction clear. The overlap with Just Peace, however, is that Ali constantly drew together the sources of war and oppression in racism, poverty, political division, and religious prejudice. His was a principled stand that had the effect of a political earthquake when he took it.

When Ali announced his conversion to the Nation of Islam in 1964 after he had beaten Sonny Liston, and then that he was now to be called Muhammad Ali, white America, and not only sports fans, were blindsided, and then outraged. Seemingly overnight, this beautiful and talented young Olympic Gold Medal winner was seen as threatening and alien. His complex relationship with Malcolm X was certainly an influence on Ali's conversation, and it gave his Muslim identity an immediate political as well as spiritual meaning.

Thus America was introduced to a young man who was far more than the handsome young Olympian and incredible boxing talent. America met a man of God.

In the Thomas Hauser biography Ali is quoted as saying that his "mother is a Baptist" and she "taught me all she knew about God." She took him to church and taught him about God.

"I've changed my religion and some of my beliefs since then, but her God is still God: I just call him by a different name." Ali converted to Sunni Islam in 1975.

Becoming a Muslim was part of his spiritual quest in life, but it was a life-long journey and it was foundational to his quest for peace.

Ali was drafted by the U.S. government during the Vietnam War. He said that he would refuse service and publicly declared himself a conscientious objector. "War is against the teachings of the Holy Qu'ran."

He appealed to conscience for that decision, but he was convicted of evading the draft. He appealed that decision right up to the Supreme Court where it was overturned. But he lost years when he could have been pursing his boxing career as he was denied licenses.

During that same period, Ali spoke out on college campuses around the country against the Vietnam War. That is when Muhammad Ali influenced me as an anti-war activist. It is hard to overstate the impact of Ali's speeches on many of us as anti-war activists in the late 1960's; what rang true was his own willingness to sacrifice for peacemaking and what one can only call the clarity of his moral vision, that is, his ability to make the connections between racism, war, and poverty.

Why should they ask me to put on a uniform and go ten thousand miles from home and drop bombs and bullets on brown people in Vietnam while so-called Negro people in Louisville are treated like dogs and denied simple human rights?

No, I am not going ten thousand miles from home to help murder and burn another poor nation simply to continue the domination of white slave masters of the darker people the world over. This is the day when such evils must come to an end. I have been warned that to take such a stand would put my prestige in jeopardy and could cause me to lose millions of dollars which should accrue to me as the champion.

Ali eventually returned to boxing and his brilliant career.

But even after his retirement and his struggles with Parkinson's disease, he continued to be a world ambassador for peace and justice.

After 9/11 as the country's best-known Muslim, he issued a plea for peace. He served as a United Nations Messenger of Peace and continued his clarity on the relationship of issues of poverty, hunger and war.

Right up until this presidential election season, Ali was able to pinpoint exactly how to resist conflict through principled advocacy of justice.

Muhammad Ali released a statement following declarations by Donald Trump that he would, if elected, institute a total ban on Muslims entering the country called "Presidential Candidates proposing to Ban Muslim Immigration to the United States." In it, he said, "Our political leaders should use their position to bring understanding about the religion of Islam, and clarify that these misguided murderers have perverted people's views on what Islam really is." Ali was referencing the terrorist attacks in Paris and San Bernardino among others.

Thank you, Muhammad Ali, for what you taught me and so many others about how religious conviction for peace and justice can empower a life, a whole nation, and the world.