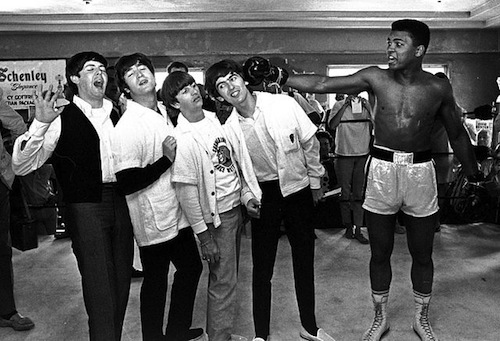 If Cassius Clay had excelled as a baseball player instead of as a pro boxer he'd probably have charmed us with his poetry and boundless ego well into the 21st century. He would not have been a shell of his former self at 42, when a neurological disease tragically began its slow assault on his muscular limbs along with other anatomical degradations.

The United States is much better off because the man who rose to fame for his unique fighting skills actually refused to fight in a senseless war. "I ain't got no quarrel with them Vietcong," he famously said in 1967, words that were once scorned but are now revered. The famous pacifist and Black Power activist burned bright in the volcanic 1960s and 70s.

Like other heroic historical figures who suffered (and died) for our sins - Jesus, Lincoln, Mandela come to mind - Muhammad Ali was exploited by people who made fortunes from his gladiatorial bouts.

He was exploited by the millions of worldwide fans who witnessed his graceful power in awe and sheer terror as he absorbed thousands of hard blows to the head, jarring and shaking his brain in the casing that protects us all from severe cranial injury. To deny that these repeated onslaughts had nothing to do with his degenerative Parkinson's is akin to maintaining that smoking does not lead to lung disease.

As a child, I admired this incredible athlete who had a mouth and an ego almost as huge as his biceps. Today, I feel guilty and angry at myself and our society for sending men like Ali, Liston, Frazier, Foreman and countless others into a ring that even the ancient Romans would have found barbaric.

We applaud as they pummel each other, trying to knock each other unconscious, attempting to deliver painful bodily injury - behavior that outside of the ring usually leads to jail sentences. It's not just boxing - every Fall Sunday, we revere our football gladiators as they ram their heads into each other at breakneck speeds, deliver punishing body blows that rattle the entire skeleton and then retire to live lives of quiet desperation. We are just now realizing that these "innocent" athletic battles can actually lead to brain disease, dementia, mental illness and, in some cases, suicide.

Even Ali, at the peak of his popularity in 1970, realized he was the victim of exploitation.

"They stand around and say, 'Good fight, boy: you're a good boy; good goin'," Ali said in a quote rarely mentioned in the many obituaries.

"They don't look at fighters to have brains. They don't look at fighters to be businessmen, or human, or intelligent. Fighters are just brutes that come to entertain the rich white people. Beat up on each other and break each other's noses, and bleed, and show off like two little monkeys for the crowd. And half the crowd is white. We're just like two slaves in that ring. The masters get two of us big old black slaves and let us fight it out while they bet: 'My slave can whup your slave.' That's what I see when I see two black people fighting."

True. In boxing, the vast majority of combatants are African American. Ali is merely the most famous. But the sports that lionize behavior that led to his premature demise are playing out daily in boxing rings all over the country. On football fields. In hockey rinks.

As this assault on the heads of young athletes continues, we simply shrug our shoulders and try to look away. We go into denial when we see hundreds of retired football players start to lose their memory and their sanity and become homeless, mentally ill and even suicidal.

It's coincidental, say the "masters" that Ali referred to. It has nothing to do with the blows to the head. See the movie "Concussion" starring Will Smith as an iconoclastic doctor and tell me that you have any doubts about the cause of this epidemic of brain disease in retired athletes.

A young Muhammad Ali woke up a nation to a fight that was not worth killing and dying for in Vietnam. His heroic pacifism was vindicated by the Supreme Court when it ruled unanimously in his favor. He became a powerful symbol of opposition to an immoral war. He inspired many who did not see the purpose of going to Southeast Asia to be one of the last people to die in a war that shouldn't have been fought in the first place.

In his very public death, after 30 years of bearing witness to the ravages of a war of fists and blows to the head that continues to be part of our national culture, perhaps Ali will wake us up again.

Muhammad Ali (aka Cassius Clay), RIP. He suffered for our sins.

Now we should honor his words.

Tom Allon is the president of City & State, NY and a former candidate for Mayor. Comments or questions? tallon@cityandstateny.com.