With thousands taking to the streets in protest after a YouTube video mocked Muhammad, many pundits are comparing the situation to the mother of all Muslim controversies: the so-called Muhammad Cartoon Crisis of 2005 and 2006, which exploded after Danish newspaper Jyllands-Posten published a dozen cartoons under the headline "The Face of Muhammad."

Hundreds of thousands of people protested the cartoons, leaving nearly 250 dead and 800 or so wounded. The new uproar over the "Innocence of Muslims" video -- in which protests have left scores dead and relations shaky between the West and the Islamic world -- is occurring almost exactly seven years after the old one.

We recently saw the anniversary of the precipitating event: On Sept. 19, 2005, Jyllands-Posten invited Danish cartoonists and illustrators to draw Muhammad "as they see him," promising to publish all submissions. The newspaper printed the now-notorious cartoons on Sept. 30, 2005. (Update: French satirical weekly Charlie Hebdo published a new Muhammad cartoon recently, stoking fresh outrage.)
Although the original Muhammad Cartoon Crisis made headlines around the world, there are many intriguing details that most people still don't know. Earlier this year, as part of our global exploration into what makes things funny, we traveled to Denmark to investigate the only cartoons ever to be called a human rights violation by the United Nations. We discovered a tale far more complex and surreal than we'd ever imagined. Here are a few of the odd elements behind what scholars have labeled "the first transnational humor scandal":

1) Not Necessarily 'The Face of Muhammad'

Since the cartoons were published under the headline "The Face of Muhammad," it wouldn't be unreasonable to assume they all satirized the Muslim prophet. But in fact, of the 12 cartoons, two don't portray Muhammad at all; in three others, the depictions are ambiguous at best. One cartoon is completely unintelligible; in a Harper's Magazine critique, cartoonist Art Spiegelman said as best he could tell, it's of five Pac-Men eating stars and crescents.

2) A Subversive Message Got Lost

One cartoon, by liberal illustrator Lars Refn, made fun of Jyllands-Posten and its notoriously far-right politics. As requested, Refn drew Muhammad as he saw him, but not Muhammad the Prophet. Instead he drew Muhammad, a seventh-grade boy from a local school district, dressed in the jersey of a nearby soccer club known for its diversity and socialist leanings. In the picture, "Muhammad" has written on a blackboard, "The board of direction of Jyllands-Posten are a bunch of right-wing extremists."

The subtitles in Refn's cartoon were lost in the ensuing controversy, however, and like several of his colleagues, he briefly had to take his family into hiding. As Refn told us when we met him earlier this year, "If I had known a billion people would see this, I would have made a better drawing."

3) Still Waiting for 'Muhammad the Profit'

"First there was Muhammad the Prophet. Now there is Muhammad the profit."
The most controversial and iconic of the 12 cartoons was penned by Jyllands-Posten staff cartoonist Kurt Westergaard. He depicted Muhammad wearing a sizzling bomb for a turban. Since then, Westergaard has been the target of multiple attacks. He's lived under 24-hour-a-day armed security ever since an intruder smashed through his back door with an ax in 2010.

The cartoon that got him into the mess sits in a vault somewhere, waiting for the right buyer. When we visited him, Westergaard told us a $5,000 offer came from Martin J. McNally, a former American sailor who spent several decades in prison after hijacking a Boeing 727 in 1972, only to be nabbed once he parachuted out over rural Indiana. Westergaard's still waiting on a better bid. "As my very practical wife puts it," he told us, "'first there was Muhammad the Prophet. Now there is Muhammad the profit.'" 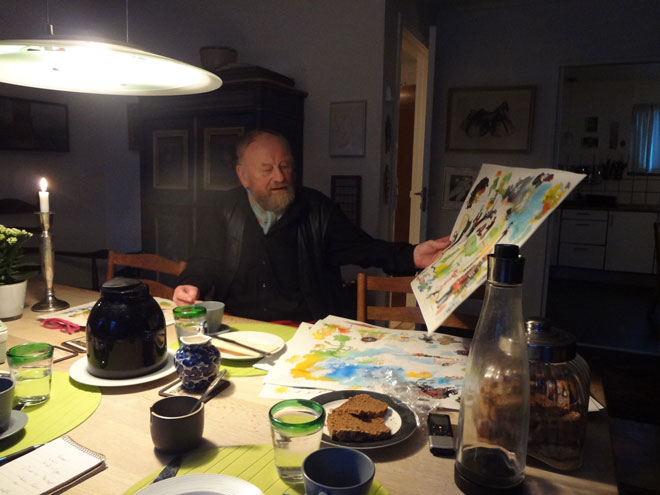 Danish political cartoonist Kurt Westergaard, whose explosive image of Muhammad wearing a bomb for a turban spawned international outrage in 2005, shows off some work in his heavily secured home.

Jyllands-Posten editors decided on the cartoon project as a demonstration of free speech after hearing that Danish writer Kåre Bluitgen hadn't been able to find an illustrator for his children's book about Muhammad. The assumption was that illustrators feared they'd face reprisals if they drew the Prophet. But Bluitgen's inability to find a collaborator might have been due to his less-than-stellar reputation: A few years earlier, Bluitgen had suggested people should hold a demonstration in which they splashed the Quran with menstrual blood.

6) An Atmosphere of Racial Tensions

The cartoons appeared at a time when Denmark was embroiled in racial tensions. Until the 1960s, the country was remarkably homogenous and insular. That changed when workers started emigrating there from Turkey, Pakistan and the former Yugoslavia. In 1997, a Jyllands-Posten survey found that nearly half of all Danes saw Muslims as a threat. It was fertile ground for the Danish People's Party, a far-right, anti-immigrant group that by 2002 had become the third-largest party in the Danish parliament. The DPP doesn't mince words when it comes to Islam. Its chairperson has claimed parts of the country are being "populated by people who are at a lower stage of civilization."

While Jyllands-Posten published the cartoons in September 2005, the controversy didn't erupt until early the next year. To some observers, the timing suggests that Middle Eastern power players fueled and shaped the controversy to their own devices, much like the Innocence of Muslims video has "provided an excuse for anti-American riots in the Middle East," as Wired wrote last week. The cartoon controversy was a way to distract people from countries' internal problems, a way to exert Middle Eastern leaders' authority on an international stage, a way to prove that they were the true defenders of Islam. After all, only after diplomatic channels collapsed and political egos reached boiling points did the Middle East erupt.

Danish diplomacy didn't help matters. It's possible the situation might not have gotten so out of hand if Anders Fogh Rasmussen, the Danish prime minister, hadn't steadfastly refused to meet with ambassadors from Muslim countries when they first approached him. Political analysts have suggested that Rasmussen was eager to come off as assertive and unyielding as the world watched. If so, the move paid off. Rasmussen is now head of NATO.

9) Many Never Even Saw the Cartoons

A 2006 Pew Research Center survey of 13 countries around the world found that a staggering 80 percent of respondents had heard about the controversial drawings. But there's a difference between hearing about the drawings and actually seeing them. According to Klausen in The Cartoons That Shook the World, when a Palestinian research organization drilled down into those numbers, it found that while 99.7 percent of Palestinians were aware of the cartoons, only 31 percent had actually laid eyes on them.

Scandinavia produced a second, smaller Muhammad cartoon crisis two years later, when a small Swedish art gallery asked conceptual artist Lars Vilks to submit work for its exhibit on "the dog in art." Vilks drew a dog with the face of the Prophet. Like Westergaard, he now lives under armed security.

It's not the first time Vilks courted controversy. Before his Muhammad drawings, Vilks was most famous for Nimis, a giant tree house-like driftwood sculpture he's been building on a nature preserve near his home for decades, much to the chagrin of the local government. To safeguard the structure, Vilks and his supporters proclaimed the 1 square kilometer surrounding it to be the independent micronation of Ladonia. Ladonia now has its own flag (a blank green rectangle), a national anthem ("Ladonia for Thee I Fling") and a citizenry of more than 15,000, courtesy of its free online application process. Before her arrest for plotting to kill Vilks, U.S.-born Colleen "Jihad Jane" LaRose was granted Ladonian citizenship, something that Vilks says caused the CIA agents tracking her no end of confusion.

A version of this story originally appeared on Wired.com.