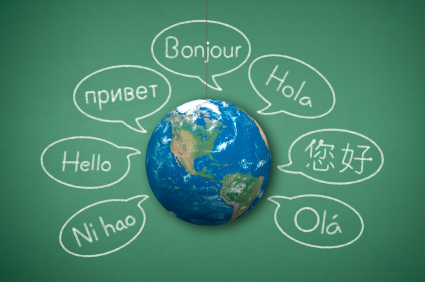 A cousin of mine went for an internship program in South Africa early last year. When she came back a couple months back, she narrated to me her various adventures that included everything from hiking to bungee jumping. She stayed with a friend in a tiny rural community for the duration of her internship. Naturally, I expected that she should have picked up a bit of the language.

But when I brought it up she gave me this answer: "I enjoyed my stay in South Africa and will love to revisit it someday. But more than half the time I could not understand what the natives were talking about".

Many of us can relate to her story; we complain about how difficult it is to pick up a foreign language, both in written form and conversationally.

But as businesses continue to cast their net across the globe - thanks to the global reach of the internet - and immigration persists, cultures will continue to meet and overlap and consequently so will languages.

Yes, there is no easy way to learn a new language, what with the cultural and psychological barriers we would have to overcome. Learning a new language is attainable but requires a lot of hard work and dedication to the learning process.

So here are a few tips on learning a new language.

1.Make sure you fully understand it

It will always be more difficult to learn a new language just for the sake of it. There almost always has to be a concrete reason for why you want to learn the language.

There are legitimate reasons for wanting to learn a new language. Let us say your spouse is from a country that speaks a different language than yours, or that you were transferred to an overseas branch office of the firm you work for.

The fact is that if you have a credible reason for tackling a new language, you are more likely to remain motivated throughout the learning process.

2.Find a partner for motivation and accountability

Ever heard of Matthew Youlden? He speaks nine languages fluently and can switch seamlessly from one language to another in the same breath. One might actually be surprised to realize that he is British.

How did he get this good? He had a partner - his twin brother Michael Youlden. They both tackled their first foreign language - Greek - together when they were 8 years old.

"We were very motivated, and we still are. We push each other to really go for it. So if he realizes that I'm doing more than he is he'll get a bit jealous and then try and outdo me (maybe because he's my twin) - and the other way round."

Follow Michael's example - find someone who is also on the journey to learn a new language and keep each other accountable. If you cannot find someone learning the same language as you, just make sure that whoever you find is someone who will always push you to try a little bit harder and stick with the program.

3.Have yourself a conversation overload

The best way to learn a new language - and really anything else - is to keep at it. Constantly seeking out opportunities to speak the language will improve your brain's ability to remember the words and improve your confidence to engage in conversation with the language next time.

Now you will not always be able to find someone to speak it with. When such occasions arise, speak it to yourself.

"You're learning a language to be able to use it. You're not going to speak it to yourself. The creative side is really being able to put the language that you're learning into a more useful, general, everyday setting - be that through writing songs, generally wanting to speak to people, or using it when you go abroad. You don't necessarily have to go abroad; you can go to the Greek restaurant down the road and order in Greek."

Need I say more? The gist of it is to try to involve the new language in any way reasonable in your daily activities to help you strengthen your grip on it.

Speaking a different language will most likely feel different on your tongue. They will make different demands on your lips, tongue and throat as you will be forced to make sounds you probably have never made before.

The best way to learn the perfect diction is to glean from the originals. Do you have neighbors, friends or colleagues that speak the target language? Spark up a conversation with them as many times as you can and listen to them talk.

Study the way they are saying words that use that sound, and then try your best to imitate that sound as much as possible. It might be difficult in the beginning but with practice, it will get easier.

Also, watch movies that employ the target language. After all, it is not every time that you can see someone to speak it with.

6.Accept and own your mistakes before they happen

Have you ever tried to say something in a foreign language and completely botched it up? Maybe you even ended up cussing out the person you were supposed to be having a civil conversation with?

Do not worry; it was bound to happen eventually. Mistakes are a crucial part of learning. You need to accept beforehand that you will most likely say a lot of stupid stuff. It's cool, just apologize, ask for the correct statement and move on.

This is by no means an exhaustive list. Language learning can be tedious and overwhelming but its benefits far outweigh the sufferings you have to go through.

And remember to always keep it fun. You do not want to bore yourself to death now, do you?