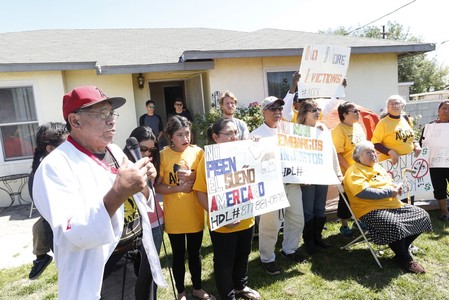 Facing eviction by Wedgewood Inc, Pablo Caamal and his family launched a vigil in front of their Rialto, CA home, supported by friends and neighbors (Photo by La Opinion).

On March 30, Greg Geiser, the CEO of Wedgewood Inc., kicked Mercedes and Pablo Caamal out of their modest home in Rialto, a working class suburb of Los Angeles. So that night the couple, joined by supporters from the Alliance of Californians for Community Empowerment (ACCE), protested on the sidewalk outside Geiser's tony Manhattan Beach home in an effort to persuade him to sell them back their foreclosed house, as he had promised to do. The protest was also designed to draw public attention to Wedgewood's predatory real estate practices.

Now Geiser is suing the Caamals, ACCE organizer Peter Kuhns, and the statewide community organizing group, claiming that he has amassed huge costs in private security and has feared for his life as a result of the protests at his home and at Wedgewood's Redondo Beach headquarters.

In essence, Geiser is trying to evict the Caamals twice - once from their own home, and now from the sidewalk outside his home at 212 Morningside Drive in Manhattan Beach, which according to Zillow is valued at $5.7 million.

"It is outrageous that a multi-millionaire would file a case seeking punitive damages against a family whose house he just foreclosed on," said lawyer Matthew Strugar, who is representing the Caamals, Kuhns, and ACCE along with co-counsel Colleen Flynn. "In addition to being cruel it is also unconstitutional. The Caamals or anybody else have the First Amendment right to protest on a public sidewalk - the quintessential forum under First Amendment law."

"He's saying 'you can't protest outside my house because I don't like you,'" said Strugar.

The Caamals will appear at a press conference on Friday at 1 p.m. in from of the courthouse at 111 North Hill Street in downtown Los Angeles. The Caamals will describe how Wedgewood agreed to resell them their property but demanded $100,000 more than the company paid for it - and then decided to evict the family once they provided a loan prequalification letter from a lender. Other homeowners and tenants who have been victimized by Wedgewood's aggressive foreclosure and eviction practices will describe the company's dishonest and deceptive behavior, such as promising to provide relocation assistance and then refusing at the last minute. 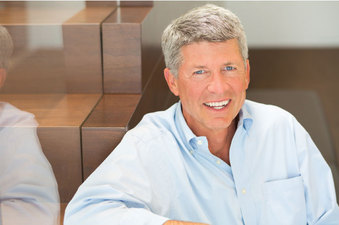 Geiser, 58, founded Wedgewood in 1985 and merged it with HMC Assets in 2014. Companies like Wedgewood are often called "bottom feeders." They buy homes at short sales and foreclosure auctions and sell them at huge profits. Reflecting its business philosophy, the company has a huge Monopoly board on a wall at its headquarters at 2015 Manhattan Beach Boulevard in Redondo Beach.

Speaking at a real estate conference last September in Florida, Geiser claimed that his firm is the biggest "fix and flip" company in the country. He boasted that the company purchases about 250 foreclosed or about-to-be-foreclosed homes a month. Geiser told the audience that the "distressed market" is "hot and sexy" and "new and trendy."

The "fix and flip" business made Geiser a wealthy man, but it has caused much distress for homeowners like the Caamal family, victimized by Wedgewood's practices.

The Caamals came to the United States from Mexico in the 1970s and are American citizens. Mercedes, 58, and Pablo, 63, have both worked at cooks in local restaurants. They purchased the house at 1805 North Willow Avenue in 2006. They have five children who are pursuing successful lives. Their 19-year-old daughter Daisy is a full-time college student in San Francisco who supports herself by working in a restaurant. Their 23-year-old daughter Merari is also a college student who lives at home and works part time in a warehouse. Elizabeth, their 27-year-old daughter, also lives at home and works in the same cafeteria, at Cal State-San Bernardino, as her parents. Their 32-year-old son Moises and 35-year-old daughter Christy are married and live with their respective families.

But in 2010, at the height of the economic crisis, the Caamals' American dream started to become a nightmare. Both Mercedes and Pablo were laid off from their jobs as cooks at a local private college cafeteria. They quickly found new jobs and, like many Americans struggling to make ends meet during economic hard times, applied for a loan modification with Wells Fargo. The bank immediately granted a temporary modification.

Last September, after Wells Fargo put the home up for sale at an auction, Wedgewood -- which purchases and sells foreclosed properties around the country -- bought the Caamals' home for $284,000. After the Caamals and their supporters held a protest at Wedgewood's Redondo Beach headquarters, the company reluctantly agreed to hold off on eviction long enough for the family to secure financing for a loan to repurchase the home.

But Wedgewood reneged on its promise and demanded that the Caamals pay $375,000 for the home they were still living in. The Caamals sent Wedgewood two letters from a lender stating that they qualified for a loan to purchase their home at that price. According to Kuhns, a Wedgewood staffer called the lender to verify that the family had qualified and said they would be requesting income documentation. But Wedgewood never followed through. Instead, they refused the Caamals' offer and began eviction proceedings against them.

The Caamals had never been involved in any protest activities before, but their experience with Wedgewood led them to fight back.

"I'm not willing to walk away from a home I worked my whole life to buy," explained Pablo Caamal.

With ACCE's help, the Caamals, along with the family, friends, neighbors and ACCE members, pitched tents outside the house and launched an around-the-clock vigil to demand that the eviction be stopped. The Caamals and their supporters visited the San Bernardino County Sheriff's headquarters, where representatives of Sheriff John McMahon accepted a letter requesting that the department refuse to carry out the unfair eviction. The first few times the Sheriff's deputies came to the house and saw local news media covering the vigil, the law enforcement officers did not try to evict the family. But private security, presumably hired by Wedgewood, kept constant vigil outside the home as well - and one morning more than 15 Sheriff's deputies surrounded the house and evicted the family.

The Caamals, along with their ACCE supporters, also took their protests to Wedgewood's offices and then to Geiser's home. The protest that triggered Geiser's lawsuit started around 9 pm. The entire protest consisted of about 30 people, most of them wearing ACCE t-shirts, picketing for about 90 minutes on the sidewalk carrying signs that read "No More Unfair Evictions." In a signed declaration, a legal observer from the National Lawyers Guild, who was present during the rally, noted that the protest was peaceful and that all the participants stayed on the sidewalk during the entire time.

In the lawsuit, Geiser calls the peaceful group a "mob" and claims that he and his wife "feared for our safety." According to Geiser's lawsuit, 10 police officers arrived after he called the Manhattan Beach police. The NLG observer reported that at no time did the police have to intervene. During the protest, Geiser's wife left the house through the back door and went to a neighbor's house. Geiser late hired a private security company to patrol his home.

According to Strugar (the Caamals' and ACCE's attorney), such protests are legal because sidewalks are public property. Among the 88 cities in Los Angeles County, only four have local laws restricting "focused residential picketing" (that targets a particular person or family) in front of private residences. Manhattan Beach isn't one of them. Geiser's lawyers, from the LA firm Troy Gould, are making their claim based on an LA County law against such picketing, but that law only applies to unincorporated areas, not incorporated cities like Manhattan Beach. Geiser is seeking so-called "unlimited civil damages" in excess of $25,000 and seeking to ban the Caamals and other ACCE members from protesting near his home.

Not surprisingly, Geiser and his company are staunch Republicans, since the GOP has fought hard in Washington, D.C. against laws requiring lenders to modify mortgages and stem the epidemic of foreclosures. In recent years, Wedgewood's employees have made over $231,000 in political contributions, almost all of it to Republican candidates, the Republican Party, and Republican-oriented PACs. Geiser alone has made $93,000 in political donations, including contributions to Mitt Romney, John Boehner, Right to Rise (Jeb Bush's presidential PAC), and Americans for Ethical Leadership, a Republican super PAC. David Wehrly, the firm's COO, has given $86,441 in contributions, spreading his donations among many candidates, including George W. Bush, Mitt Romney, and John Boehner and, in this year's president sweepstakes, to Jeb Bush, Carly Fiorina, and Marco Rubio. He also donated $1,000 to the Tea Party PAC called Our Country Deserves Better.

Meanwhile, the Caamals and their children are living with different relatives while they pursue their effort to buy their home back. Families facing unfair foreclosure or eviction can contact the ACCE anti-eviction hotline at (877) 881-0878.

Peter Dreier teaches Politics and chairs the Urban & Environmental Policy Department at Occidental College. His most recent book is The 100 Greatest Americans of the 20th Century: A Social Justice Hall of Fame (Nation Books).