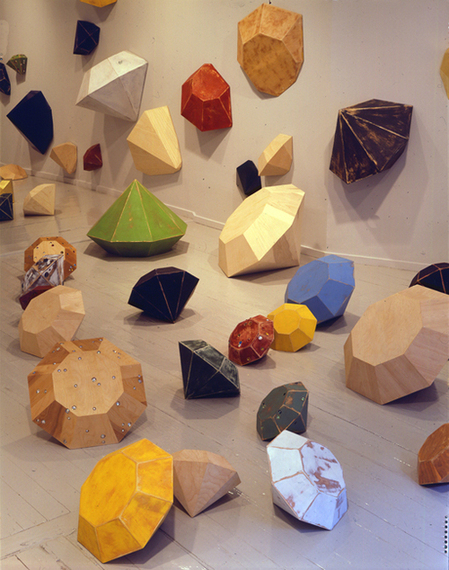 Art Southampton is returning for its fifth season on the grounds of Nova's Ark Project, opening on July 7 with a VIP Preview Party that will benefit the Parrish Art Museum and Southampton Hospital. It's certainly appropriate for this acclaimed contemporary and modern art fair to land in the Hamptons, as there is a great tradition of prominent artists, writers and great collectors who live and work in the area often dubbed "SoHo by the Sea." Like many coastal communities, from Key West to Provincetown, which became celebrated artist colonies centuries ago, the East End of Long Island got its first official start in 1891 with a painting school founded by the American Impressionist William Merritt Chase. Since then, commuting from Manhattan or living there year round has been de rigueur for hundreds of artists who find the area supportive and inspirational. The list of important artists, from de Kooning, Chamberlain and Duchamp to Ernst, Guston and Warhol, who lived in the Hamptons or still occupy the area as unofficial "artists in residence," as well as Benglis and Bleckner, April Gornik, Rizzie and Prince, Schnabel and Sultan, among others, is too long to mention here. This fair also will highlight some of the East End's most prolific past and present artists, including Perry Burns, Eric Fischl, Raymond Hendler, Jeff Muhs, Charlotte Park, David Salle, Susan Vecsey and Esteban Vicente. As part of Art Southampton's lecture series presented by One Art Nation, Annelien Bruins will discuss "Artists in the Hamptons" on Friday, July 8. Not that far from the fair, you can still feel the physical power and influence of Jackson Pollock with a guaranteed memorable visit to his original home and studio in East Hampton, where one can enjoy the thrill of walking on multilayered drip floors in his converted barn while wearing protective green slippers provided by the Pollock-Krasner Foundation.

This year's Art Southampton will feature over 70 prominent international galleries and showcase tens of millions of dollars' worth of some of the finest museum quality art, sculpture and photography from the 20th and 21st centuries.

In addition, the fair will offer special exhibitions such as "Call of the Wild," co-curated by Brooke Shields with New York Academy of Art President David Kratz, which will feature paintings and sculptures by academy alumni that focus on the natural world and the animal kingdom.

Among the opening night events on Thursday, July 7, is "Shark Tank" investor Kevin O'Leary's contemporary photography exhibition titled "Irreconcilable Images," presented by Gallery Valentine. O'Leary has been snapping photographs for decades, and has around 400,000 negatives to process someday. In the interim, this is a wonderful opportunity to meet a talented photographer who creates truly outstanding prints with a twist. To see an interview with him at Arcature Gallery on YouTube go to: YouTube, and for an in-depth essay go to: Huffington Post. Sales of O'Leary's photographs through the curated installation will benefit the Perry J. Cohen Foundation (www.pjcf.org) and aspiring Teenage Entrepreneurs.

Last year's Art Southampton attracted top collectors, cultural leaders and philanthropists of the East End. Over 21,000 collectors and art enthusiasts visited the expansive pavilion, and this year looks like another winner. It's a challenge to choose a few standout art works with so many fine galleries participating from around the world, including from Seoul, Dubai, Amsterdam, London and Paris, as well as from major cities in the U.S., but here's a quick peek at a selection of works showing a variety of talents and styles and a high professional level of creativity: 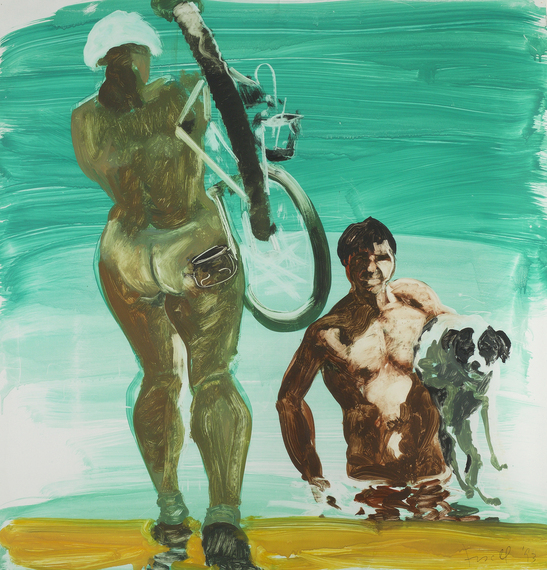 Eric Fischl is an internationally acclaimed American painter and sculptor who moved to the Hamptons with painter April Gornik in 1998. Consequently, much of his subject matter is related to his surroundings in Long Island's East End, such as the image here. While in Chicago very early in his career, he discovered the art group "Hairy Who," a non-mainstream fraternity of brilliant artists, including Ed Paschke and the hilarious erotic vulgarity of Jim Nutt, which were revelatory experiences for the artist. Later, as a self-described painter of the suburbs, Fischl's works incorporated elements of adolescent sexuality and voyeurism, including Bad Boy, perhaps his most famous painting. 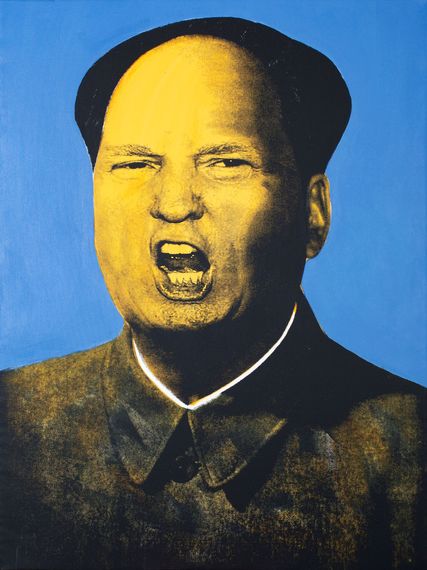 Knowledge Bennett is a self-taught visual artist based in Los Angeles who has a special interest in creating larger-than-life visual interpretations of creative geniuses. His work often is audacious and controversial, and is rooted firmly in photography with an emphasis on contemporary portraits that are hybrids of other well-known images. He obviously was inspired by Andy Warhol, and often incorporates repeat imagery that follows in the Warholian tradition of multiple likenesses. In Mao Trump, two notorious demagogues are spliced together utilizing one of Warhol's most famous silkscreens and superimposing the eyes and squawking mouth of the assumed Republican presidential candidate to set up a creepy albeit clever comparative illustration for a political broadside. 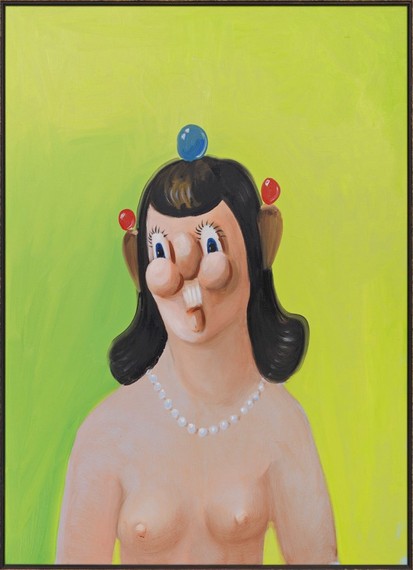 George Condo's idiosyncratic portrait of a cartoonish, bare-breasted girl caught in a balancing act while showing off her pearls is a perfect example of this art star's work. Mr. Condo emerged on the East Village art scene in the 1980s, where he coined the term "artificial realism," describing his hybridization of traditional European Old Master painting with a Pop Art sensibility. 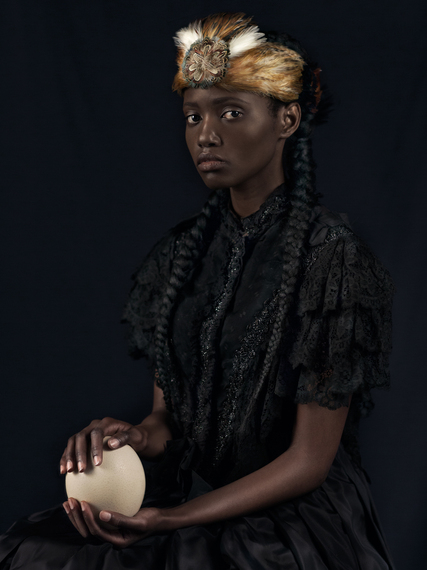 Ms. Van Weeghel studied film and photography at the Film Academy Amsterdam and has continued to work as a producer/director. She lived in Africa for fourteen years, where her penchant for storytelling led to a concentration in photography. In Egg, the artist pays homage to Sarah Forbes Bonetta, the orphaned African princess who was enslaved and taken to England to be given to Queen Victoria in the 19th century. This exceedingly handsome portrait utilizing daylight only has an old world spirit with a contemporary twist. 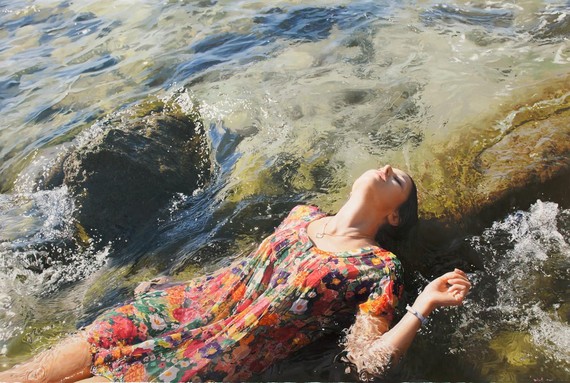 In what seems to be a preposterous achievement of high level photorealism, the artist Yigal Ozeri has developed a unique style of figurative painting since espousing realism in early 2000. His works often depict women interacting and connecting with nature; influenced by the Pre-Raphaelite works of the 1850s, his paintings possess a romantic sensibly not captured by others of the genre. Legendary dealer Louis Meisel is presenting "Who is a Photorealist and What is Photorealism?" on Saturday afternoon of the fair. 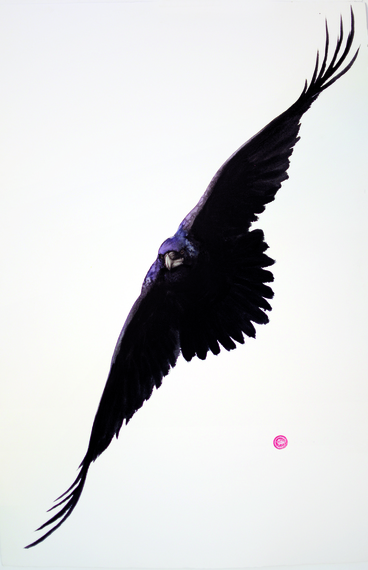 With a last name that sounds like an aviary species, it isn't all that surprising that Martens has a special love for birds, which has been his main interest since childhood. The background for the artist's style has its foundation in his focus on the type of meditation found in Zen Buddhism. Painting from memory on handmade paper, the dramatic imagery of a bird in flight seems to stick in his mind until he is ready to transfer the distant memory into tangible reality. 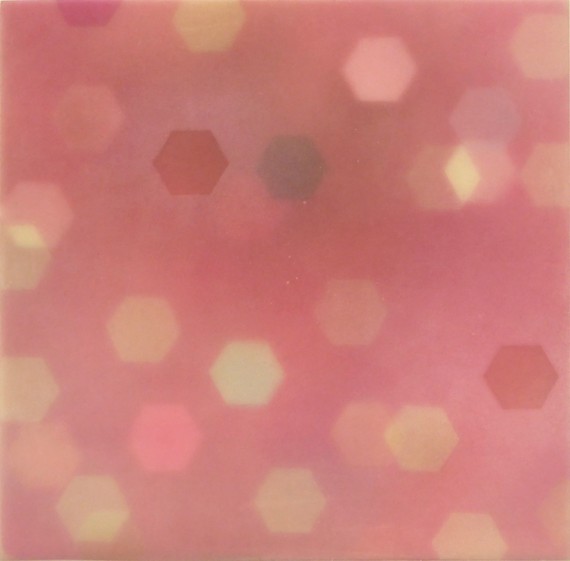 Mike Solomon creates beautiful, color saturated paintings that have a built-in grid reminiscent of early Larry Poons geometric accents, which contain an elegant veil of dreamlike mist. Solomon is a tastemaker if there ever was one, and coupled with his unusual acquaintances, including his experiences as a studio assistant to John Chamberlain, James Brooks and Charlotte Park, and collectors like Edward Albee, Beth DeWoody, Dan Flavin and Richard Meier, among others, this kind of professional support and relationships are simply golden, and it shows. 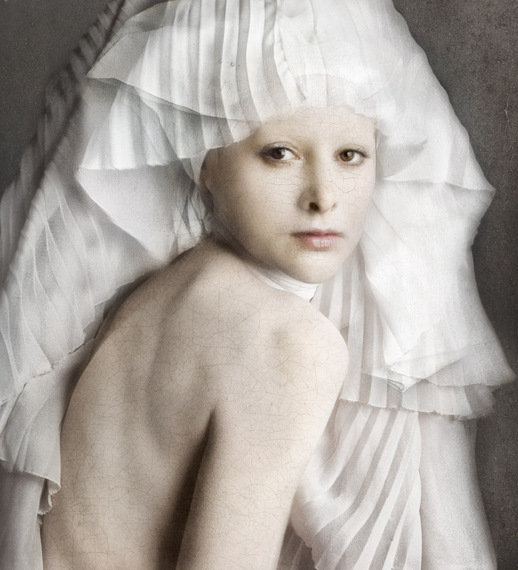 Isabelle Van Zeijl's photographic portraits have all the elements of a great romantic movie, complete with luxurious stage sets, beautiful actors, dramatic roles, inventive lighting and subtle, mysterious action. In this new series of works, the artist displays her fascination with Northern European Renaissance portraiture by spending hours in her studio, layering, smothering and building up fine palettes of subtle colors. Bravo!