Last Thursday, my school hosted a set of workshops for Martin Luther King Day. I helped to run a workshop called "A Conversation About Being Multiracial." My mom is from Tokyo, Japan and my dad is from Newport, Rhode Island. A few other multiracial students and I sat in front of an audience and talked about our experiences -- such as code switching, answering the question "where are you from?" and how language sometimes plays a complex role in shaping our identities.

Previously, I hadn't thought of my cross-cultural identity as something painful or needing support. Half-Japanese, half-Irish/French/German/Portuguese/Swiss girls are not subject to any particular racism or prejudice... perhaps because historically there have not been very many of us. In any event, I never thought of my ethnicity as being a hardship. On the contrary, I even took pride in it -- I was a cultural chameleon who could deftly switch environments and blend into different cultures due to my relatively ethnically neutral appearance. Unlike my dad, I didn't tower over everyone in Shinjuku. Unlike my mom, I wasn't classified as "asiatique" in Paris. I didn't feel like an outsider in either of these environments -- and since I love to travel, I thought that this was great.

However, the discussion last Thursday prompted me to reflect on what it was really like being this human amalgamation of different cultures and histories. I concluded that although I hadn't ever felt like an "outsider," I will never fully experience what it's like to be an "insider." My mixed identity has forced me to navigate the world in a different way and "learn" to do a lot of things that other people don't have to learn. 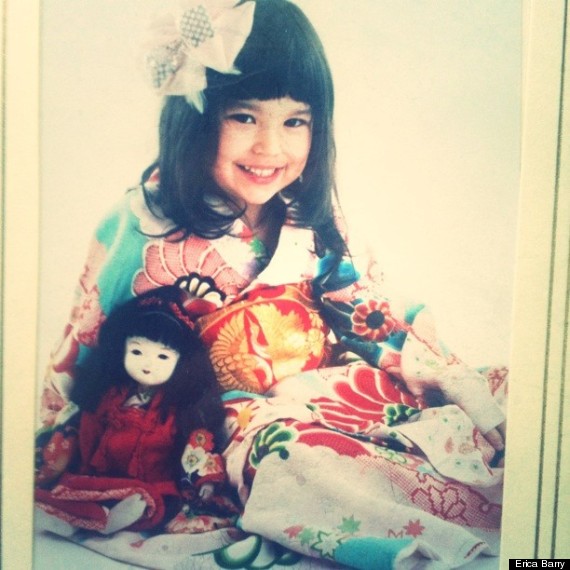 I have learned to smile and nod politely as my mom and her Japanese family laugh and share stories in Japanese. I can understand many of the words she speaks, but feel isolated by the tangible sense of kinship between my mother and the Japanese side of my family -- a shared history, culture and understanding woven into each word they spoke.

I have learned to talk about the Red Sox, eat clam chowder and attempt to blend into the sea of greying blond hair, baseball caps and hazel eyes at The Lobster Pot in Newport, Rhode Island.

I have learned to say that I am "from Japan" -- even though I have only visited Japan twice in my life. People often ask me "where are you from?" -- cashiers, waiters, random people on the subway. I used to stubbornly answer, "Washington, D.C." because that's where I was born, or "California" because that's where I grew up. But those answers would always provoke: "No! Where are you really from?"

I have learned how to answer the questions "do you celebrate Christmas?"/"Are you a Buddhist?" (yes, no).

I have learned to bubble in "other" on standardized tests.

I have learned that I don't really look like anyone in my family. I have learned to take the question "Are you adopted?" with a grain of salt. I have learned how to ignore the awkwardness when people assume that I am my American dad's young wife (since there is no possible way that I could be his biological child, this is the next "logical" assumption).

Lastly, I have learned that there is no country for half-Japanese, half Irish/French/German/Portuguese/Swiss girls on this Earth. We don't have a special language in which there are special words for "always being Pocahontas at costume parties," and "the orange color our dark hair turns in the sunlight" -- thus I am always slightly lost in translation. We don't have special holidays where we eat green tea ice cream and watch the Red Sox -- thus I will always be the Japanese girl at the Christmas Eve church service and the gaijin (foreigner) at the hina-matsuri. We don't have a slew of authors sharing our heritage, who write about creepy old men calling us "geishas," the disappointment on our friends' faces when they learn that no, we don't know how to make sushi. And because of this, I will forever and always be a wanderer.