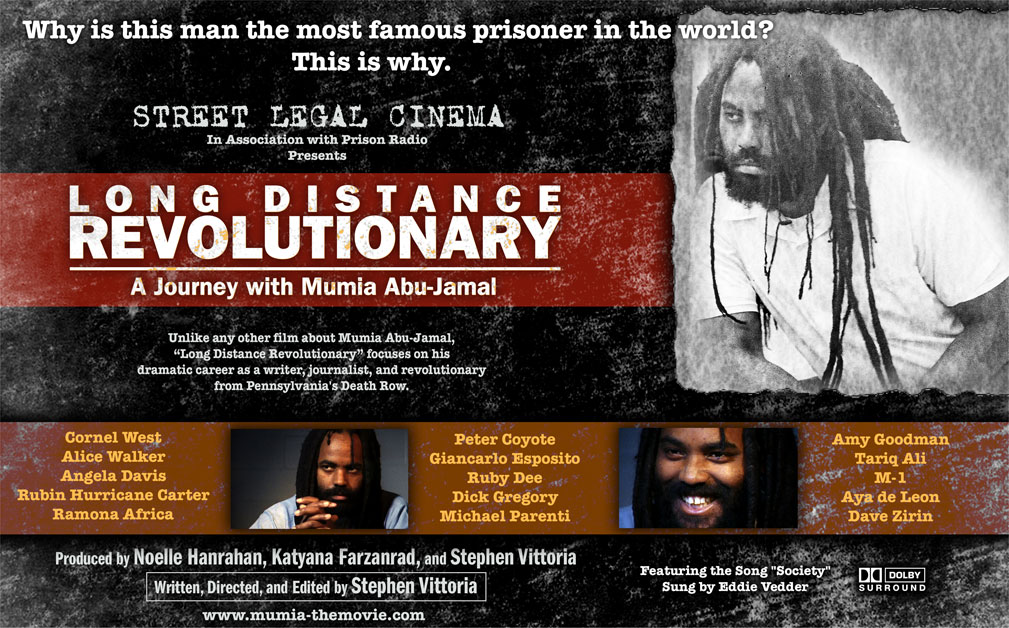 This is the second of a two-part interview with filmmakers Stephen Vittoria and Noelle Hanrahan about their new documentary Long Distance Revolutionary: A Journey With Mumuia Abu-Jamal. Go here for Part I.

Since being incarcerated, Mumia has almost developed a new voice.

SV: I think many people believe he found his voice after he was incarcerated. But if you look into the history of his life, the real history of his life, you'll find that his voice started to resonate long before he was ever incarcerated in 1982. When he was fourteen, fifteen years old, he became a writer for the Black Panther Party, left high school, traveled the country and was writing very serious pieces for the Black Panther newspaper. He absorbed a crash course in journalism from some very important mentors and before long he was contributing to a paper that was selling 250,000 copies per week, around the world, while he was still a teenager. So his voice, back in the late '60s and early '70s, wasn't really that different from his analysis today, except of course for his prose which is obviously more sophisticated now that he's in his late fifties.

SV: There are probably people out there who will say "Who the hell cares about hearing voices from behind prison walls?" I'd argue that we have an entire nation behind prison walls right now. From 1776-1992, the United States incarcerated one million people. From '92 to 2000, the U.S. incarcerated another million people. We literally have a nation behind bars -- Mumia calls it the "prisonhouse of nations," and he's been this important voice exposing what the government is trying to pull off.

NH: And you can't say that what happens on the inside doesn't affect the outside. California spends more on incarceration than it does on its schools. It has a direct public policy impact. Whether it's a way to control voting rolls, because convicted felons can't vote in most states, whether it's the controlling of the unpaid labor force, whether it's a stop-gap valve for issues to do with employment, I'm not sure what all the economic reasons are behind it, but the mainstream media has not stepped up to address this crisis.

NH: We just recorded an amazing interview with Mumia this morning. He has been taken off death row, and put into the general population for a life sentence because his death sentence was overturned. He wrote a letter back to the death row inmates, talking to them in a really personal way, about how he missed them and how in their light and humanity, they were more than just "death row." He encouraged them to open their minds, and to study and to learn and to acknowledge that enough people have turned their lives around inside through education. Mumia, for example, is conversational in Spanish and German and fluent in French. He also taught himself to read music. He's got a five-octave range.

SV: When we talk about him finding his voice, from 1992 until now, the man has written and published seven critically-acclaimed books from death row. He has broadcasted more than two thousand essays from inside his cell, solitary confinement. He is handed a telephone, and from a hand-written pad of paper, usually in one take, he reads his essays. For years, he was only allowed to use the inside of a ballpoint pen, because the prison authorities were afraid he could use the hard plastic shell as a weapon.

NH: And all of his books were written by hand, except his last one, when he was finally allowed to have a plastic typewriter. 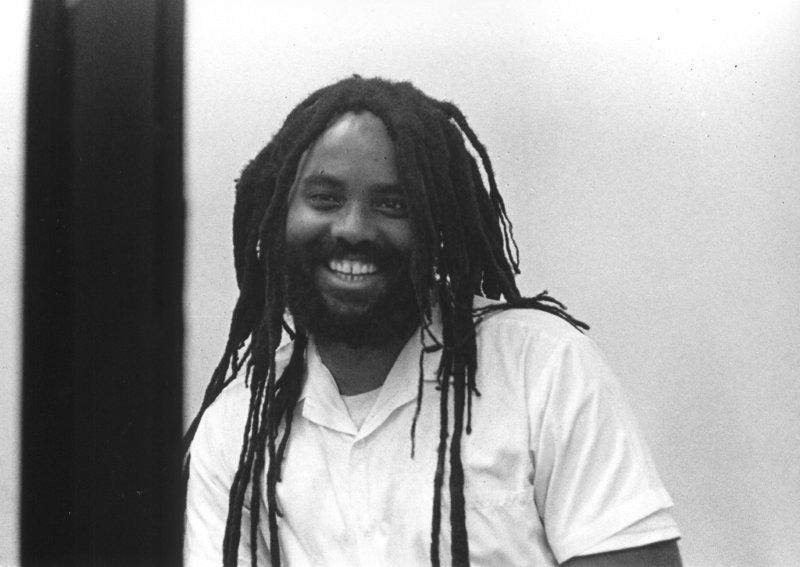 There's an old saying that there are no guilty men in prison. Everyone maintains their innocence. For many people, all they're going to see when they look at Mumia is a man who was lawfully convicted in a court of law for one of the most heinous crimes on the books: the murder of a police officer. What do you say to those people?

NH: The American justice system has an incredible ability to convict the innocent. That's been exposed in detail over the past several years, most particularly in Illinois, when a journalism class, I believe from Northwestern University, investigated the cases of all the inmates on a state prison's death row, and based on their findings, fully half of those convictions were exonerated. That, plus the DNA projects, The Innocence Project, have shown that innocence issues are a huge structural problem in many states. I also wonder at some level if the American public is paying enough attention. Are they recognizing what's happening to themselves, even? The structure of the American criminal justice system is criminalgenic: it creates crime. There are things that people believe about the Constitution that are just not true. 90% of all crimes are plead, not taken to trial. That kind of pressure on the system, isn't about the weighing of justice, it's about creating a culture of incarceration.

Again, is it a matter of social class and race more than anything?

NH: I think so. I can find as many criminals and sociopaths on the campus of Stanford University as I can on a street corner in Philadelphia. There are only certain people who go to prison. You have to be a certain class and a certain type. And you get a gold card to get out if you have connections. I think at every moment, the color of your skin and your social class can determine if you finish high school and go to college, or whether or not you go to prison. At this point, in our culture, to have an expectation that one out of three young black men will end up in prison is obscene. I can't live in a culture like that unless I can do what I do, which is broadcast Mumia's voice and create an anecdote to this dream state that the rest of the country seems to be in.

On the flip side, there have been many cases of real animals being let out of jail on a technicality and then go out to commit more heinous crimes. So what would you say to a person like Bob Dole, who is always going to support the system, and for whom the system has always worked, unlike someone from Mumia's background, in arguing that sometimes the system makes mistakes.

NH: What I would say to Bob Dole is that he had a major role in defining American culture by being in the senate, that you need to look at the result of policing policies, that we have become a culture that is extraordinarily violent, that at the same time has a huge prison population, which at the same time is cutting funds for education. This is what Bob Dole should look at, as well as study cultures with less violence, more interest in free medical health care, education and less of an incarceration nation. That, I think, is what our national political leadership should aspire to. For some reason, this one is seriously broken, and he was the head of the whole thing for a long time as Majority Leader.

SV: If ever there was a case with a lot of gray area surrounding what actually went down, it was this case. One of the reasons I structured the narrative the way I did was because I didn't want to make Long Distance Revolutionary about Mumia's case. I wanted to make it about this man's life as a writer, as a public intellectual, and most importantly as a revolutionary. Until he has another chance to make his case in open court on a level playing field, there's really no point in talking about it in the context of a film. It's just too volatile and polarizing. It's kind of like if you make a film about the Israeli/Palestinian conflict, you're just going to have people on opposite sides of the fence hurling rocks at each other. Who the hell wants to watch that?

NH: The case, in many ways, obscures what Mumia is about and why he is such a lightning rod, and the really interesting things he's doing, who he really is.

SV: And it's that very thing which really interested me as a filmmaker. As far as his case goes, I wasn't there. I've heard both sides. The case is completely all over the place. The only thing we really know about the case, what really happened on December 9, 1981 is that this myth of American justice was nowhere to be found. That's the one thing I think we do know. We may not know exactly how the events transpired, but moments after this flashpoint, after Mumia was shot and clinging to his own life, he was beaten senseless by two or three Philadelphia cops, including a Captain. It was an utter and complete sham that the system, which people watch on fairytales like Law & Order, they think this really exists. It's a con game summed up by the old adage "law is politics by other means." And that's why our film focuses so keenly on Mumia Abu-Jamal as a journalist, writer and revolutionary, because that's the heart of who he is. 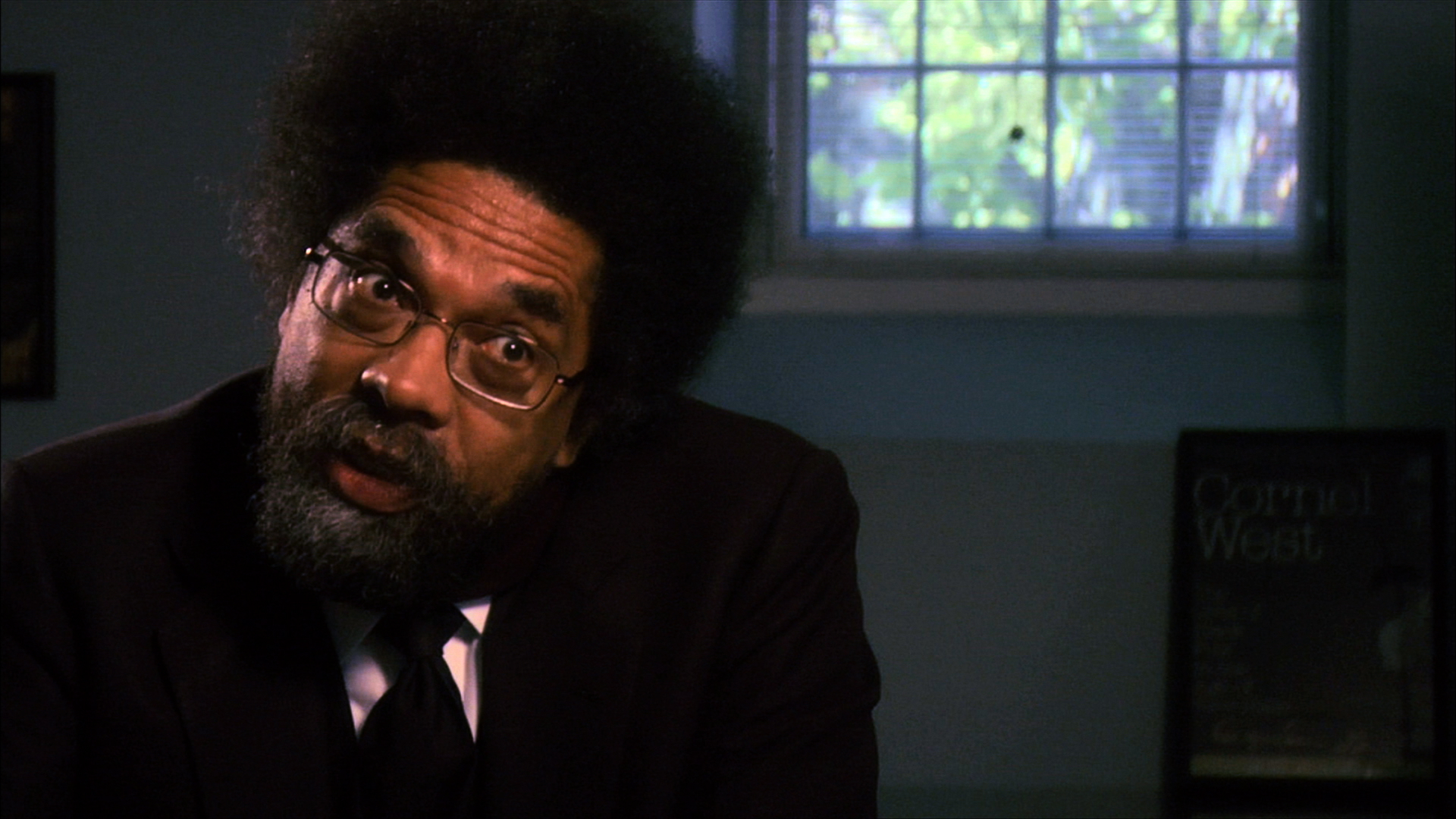 What's the genesis of the film's title?

Dr. Cornel West came up with the title while we were filming his interview, so I have to give Brother West props for that. But "Long Distance Revolutionary" refers to a man who in the 1960s, not only cut his teeth and nurtured himself on the revolution that was taking place in the streets, but wholeheartedly believed in all its tenets. Flash- forward to over forty years later and he has never stopped believing, never stopped moving that revolution forward. Let me read you something that Mumia wrote recently. He's talking about the revolutionary movement of the 1960s, be it black or white, but he's talking now to the Occupy movement: "Nor could they imagine you, in their age-leavened arrogance. They thought their generation, the sixties, were the real rebels, even as they are blind to the betrayals that have marked them as enemies to the very thing they fought for as youths."

Is that the main thing you're trying to accomplish with this film, to get Mumia's voice heard on a larger scale?

SV: That and for people to understand for the last thirty years, there has been this myth heaped upon the public about this "deranged cop killer." Glenn Beck called him a "Communist cop killer." This film, not unlike the McGovern film in many ways, goes to great lengths to offer an alternative history of the facts, as if the great Howard Zinn was helping us out along the way... and in the final analysis I think Long Distance Revolutionary does that by not focusing so much on the case itself, but by focusing on the amazing achievements of this man, and his voice, from death row.