Mummies from thousands of years ago and around the world show evidence of clogged arteries, new research finds.

The findings, published Sunday (Mar. 10) in the journal The Lancet, suggest that atherosclerosis, a form of heart disease wherein calcium deposits narrow the arteries, may have been a universal disease in all human societies, and not wholly a result of the modern diet.

"In three different continents and a total of five different sites prehistoric peoples had atherosclerosis," said study co-author Caleb Finch, a neurobiologist at the University of Southern California. While some researchers believed hardening of the arteries was a 20th-century disease, that results from modern overconsumption of fatty, sugary foods, "the generality of our observations suggests it is really a basic part of human aging under all circumstances." 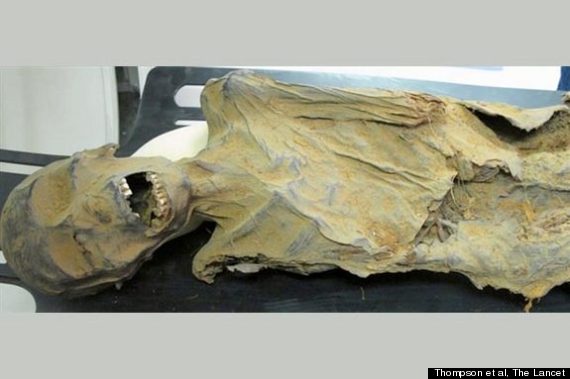 A CT scan of a mummified, mid-forties woman who lived in what is now Peru between 1100 and 1800 years ago revealed evidence of narrowed arteries.

People have long debated whether clogged arteries and heart disease resulted from the fat and sugar-laden modern diet or an inevitable vagary of aging. There's no doubt that westernized diets have worsened diabetes, obesity and chronic disease, but whether a more primitive diet could completely eliminate those scourges was debatable.

Finch and his colleagues used CT scanning to analyze the arteries of 137 mummies that spanned 4,000 years. The mummies came from Peruvian, ancestral Pueblo Indian, indigenous Aleutian islander, and ancient Egyptian populations. Some had been deliberately mummified, while others were naturally mummified due to environmental conditions. [Gallery: Scanning Mummies for Heart Disease]

Most of the mummies were younger than about 60 years old. Despite some of the people coming from societies with a grain-based diet and others likely consuming mainly meat and fish, mummies from all regions showed atherosclerosis, or calcium deposits in their arteries. That can narrow the arteries and reduce blood flow, and if the calcium deposits rupture, it can cause heart attacks.

The findings suggest that heart disease may be an unavoidable part of human aging. It's not clear how far back in evolutionary history this problem emerged: Our closest living relatives, chimpanzees, don't get atherosclerosis in the wild but do in captivity, Finch told LiveScience.

Even if it's universal, however, that doesn't give people license to chow down on funnel cake and bacon, as ample evidence suggests modern fat- and sugar-heavy diets have worsened heart disease over the last century, Finch said.

CORRECTION: A previous version of this story stated that all the mummies exhibited signs of atherosclerosis; in fact, the symptoms were observed in mummies from all regions studied, but not in every individual mummy.