The MURAL Festival in Montreal took over Boulevard Saint-Laurent this past weekend. More than 25 local, national and international street artists worked separately and in concert across large walls for this first ever event, and many have taken notice. Nevermind the gossip on the street about mayoral corruption and an ongoing rancorous debate here about a perceived graffiti problem in the city, MURAL and its supporters are staking a claim on a growing world street art stage with a strong show that can legitimately brag about a solid mix of talent and styles.

Judging from the attendance, the hashtag enthusiasm, and the cameras hoisted into the air, there should be no debate about how much the kids actually love this stuff -- and how many non-kids are also fueling the current explosion of art in the public sphere. "From 5 to 80 years old, the crowd discovered amazing talents and learned to appreciate a public art form that had been cast aside and misidentified as vandalism for the past 20 years," says Fred Caron, one of the organizers and a cultural worker in the public art milieu. "The cultural values and power of murals is finally back in the North thanks to a crazy bunch of young Canucks." 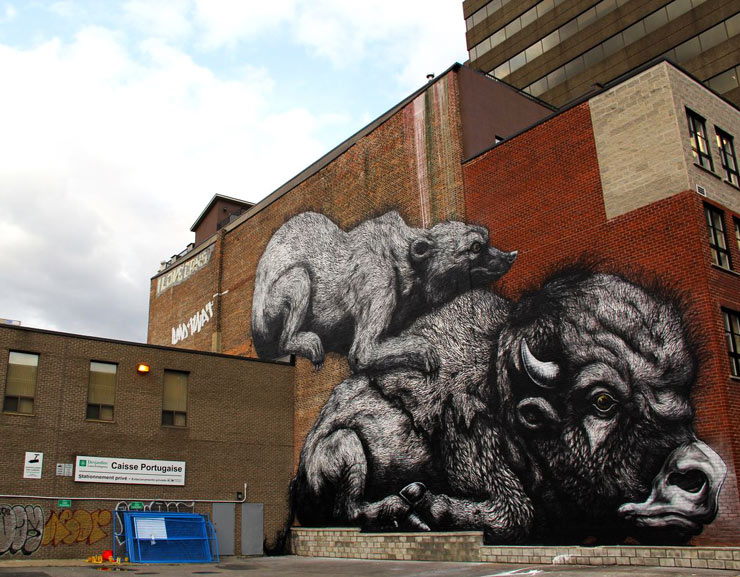 ROA (photo © Daniel Esteban Rojas). Another view of this wall with the artists' description appears below.

For an expansive event like this to succeed right out of the gate, it doesn't hurt that Montreal is a relatively homogenous city with a very strong tax base, an engaged business sector, and a vibrant arts culture chock full of ideas, performances, and participatory aspirations. With an appreciative audience thronging into the four day festival for fun and culture, the numerous large mural walls in multiple locations were accompanied by body painting, a paint battle, painting with your feet, block parties, live music, djs, a photo booth, tours on foot and bike, skateboard lessons, kite making, urban "street" inspired dance troupes, night time projections, and naturally, beer.

"What captivated me most about this trip was the level of community, cross pollination and camaraderie shared between the different artists groups, institutions and organizations in the city," enthuses LNY, a New Jersey based street artist who has been part of a few of these city-centric festivals over the last couple of years. Rather than cheaply plugging a downtown area with a momentary hype, a sort of "Ghetto Olympics" that fades quickly, leaving no real value to a community, LNY notes that the main organizers of MURAL continued to be engaged with the needs of the artists and were involved with the various satellite organizations to make sure they were thriving.

"This to me is the perfect gauge for healthy communities and for worthwhile festivals that can transcend their original novelty and spectacle to really give something back," he remarks. 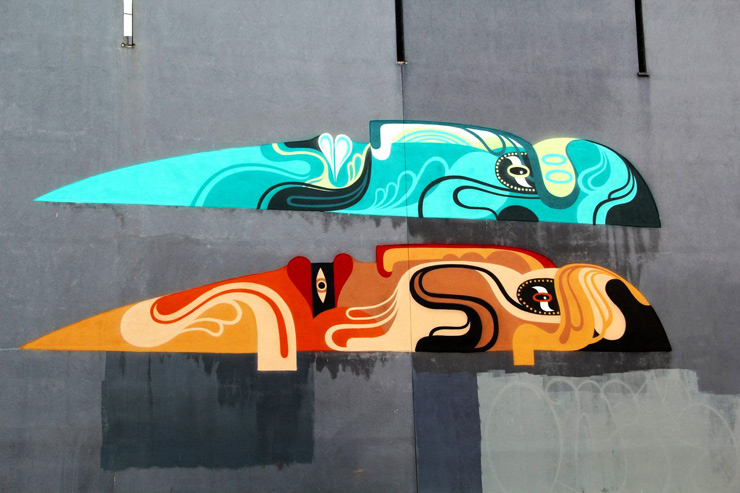 For street art photographer Daniel Estaban Rojas, whose work here displays most of the finished pieces at press time, MURAL was an inspiring opportunity to meet many new artists and to be proud of the city. "The face of Montreal has changed with this festival and I think that street art will be a lot more accepted in this city. Most people that I spoke to while shooting on the streets had one thing in common to say, and that was 'thank you'," he reports with some relief and pride. "Knowing that people were so grateful and being surrounded by such positive vibes made it all the better." 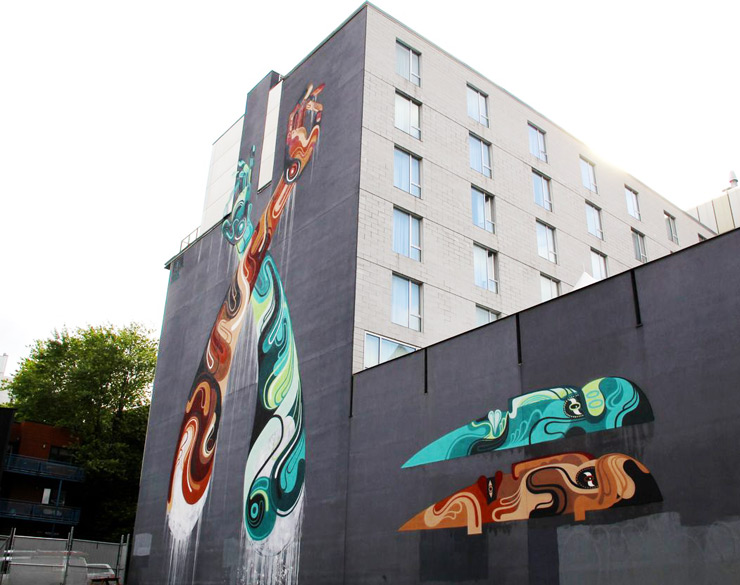 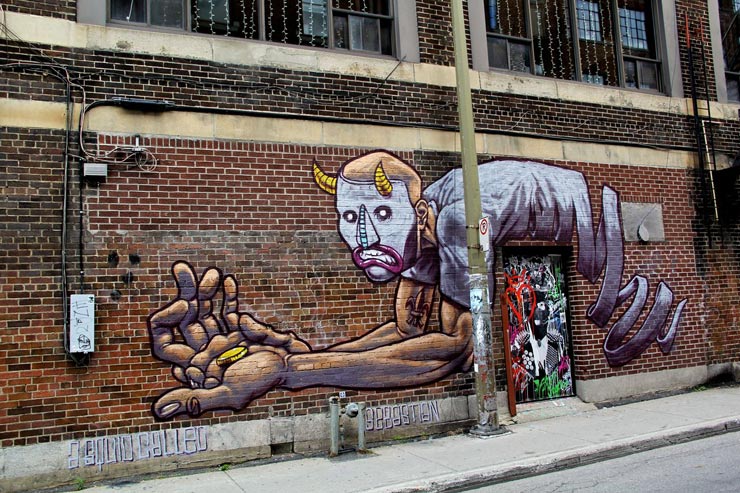 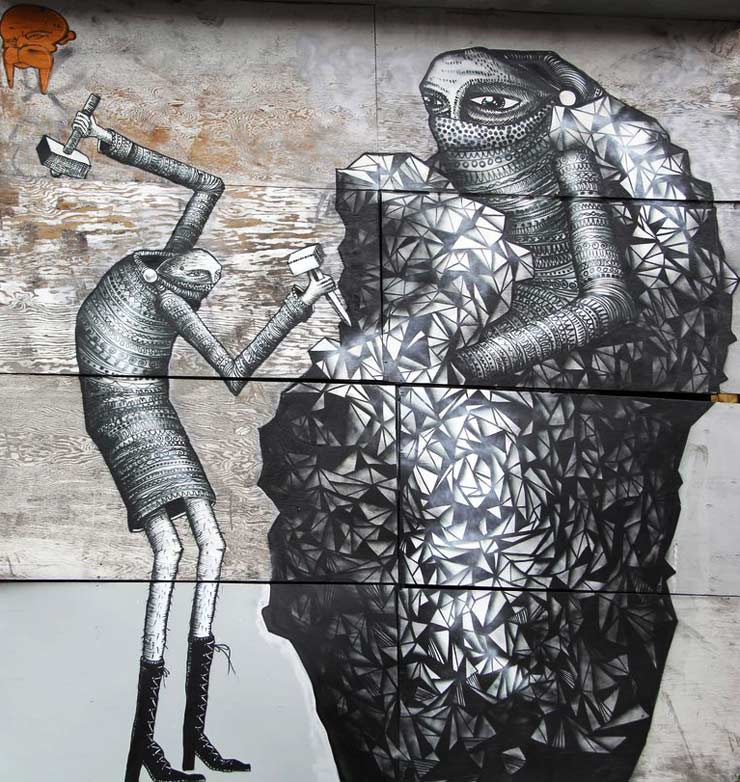 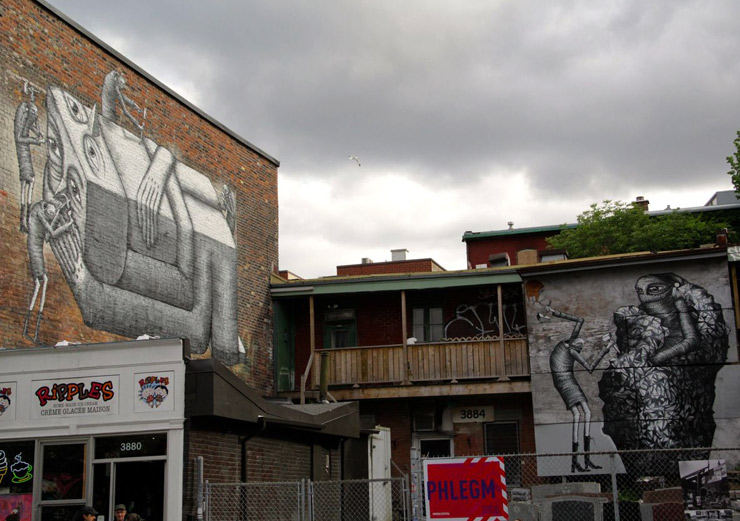 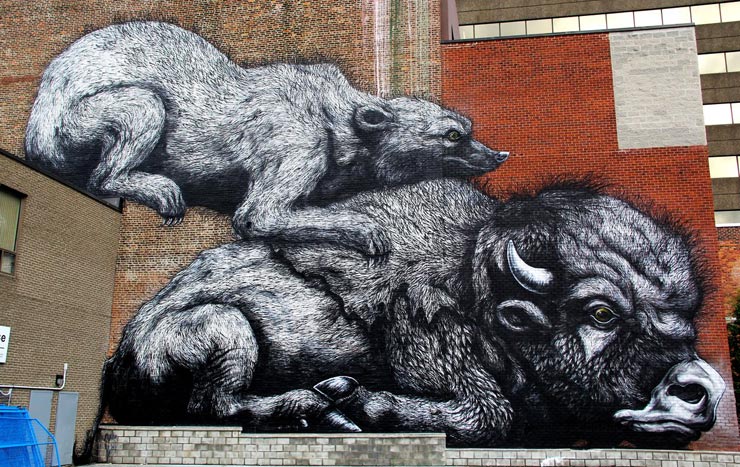 For his first visit to Montreal, the Belgian street artist named ROA says that he had a great time creating this "still life" with a bison and a bear. When talking about his inspiration, ROA says that he was impressed with the history of the so-called American bison, which was incredibly abundant in the early 19th century, numbering more than 40 million. After being hunted almost into extinction with a population of 200 a century later, the bison slowly have reestablished their numbers in Canada to 700,000. He decided to add a bear laying on top because it tells a similar story of a native mammal in the region. 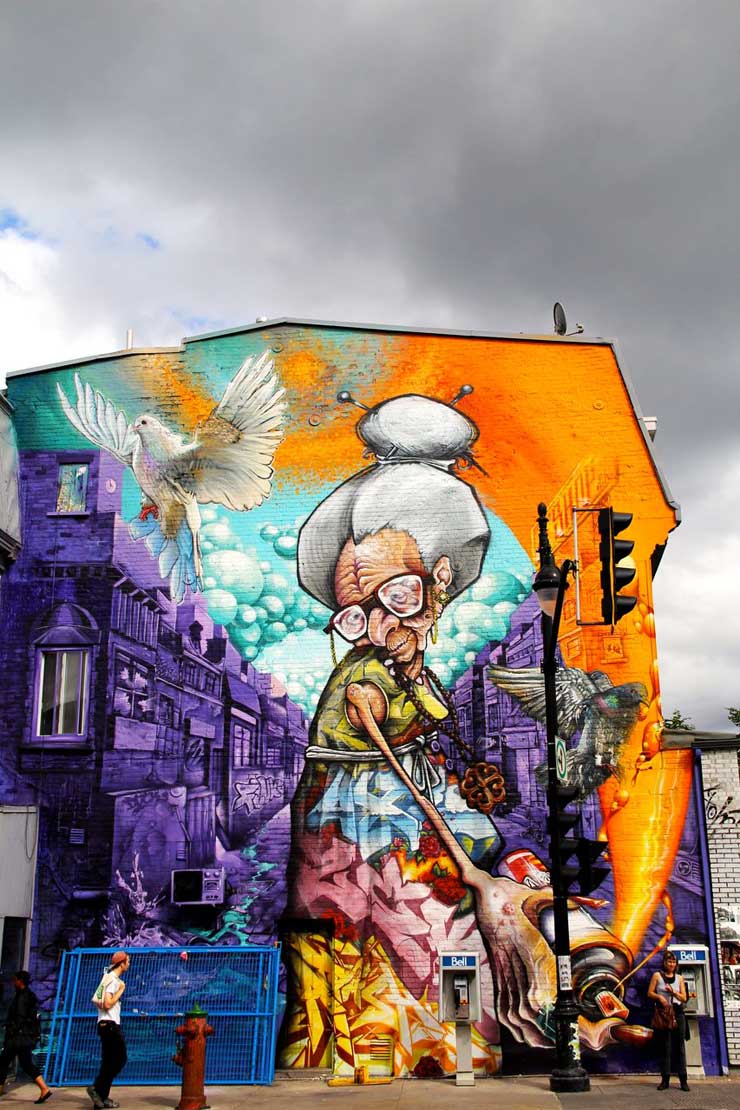 "I decided to speak about the Americas and the aspects that unite us though history and conflict," explains street artist LNY about his portrait of his cousin Leslie. He chose her because he considers her, "a person who represents the unification of north and south in an individual; a sort of cultural hybridism." She is handling maiz, or corn, "as a metaphor for PanAmerican unity; as a crop that has sustained the continents since ancient times and that is now a shell of it's former self after being thoroughly genetically modified for gain and profit." 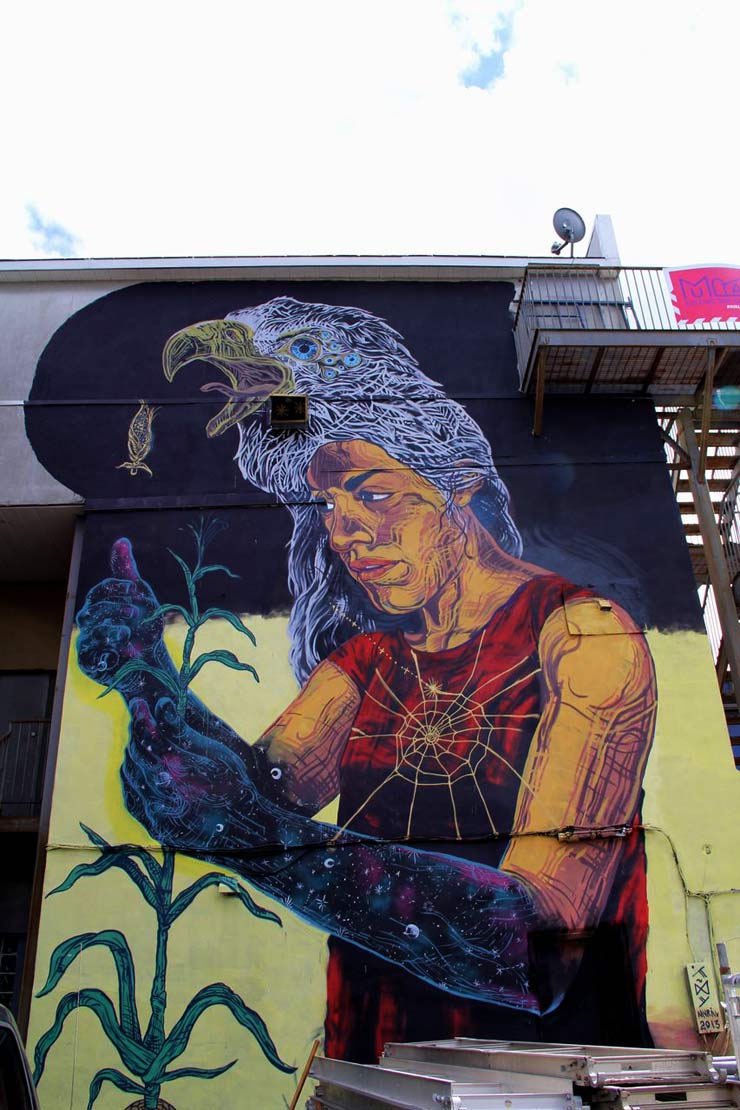 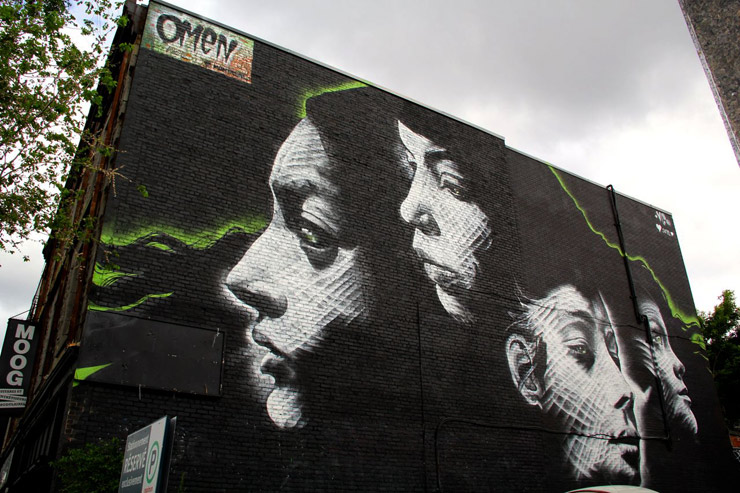 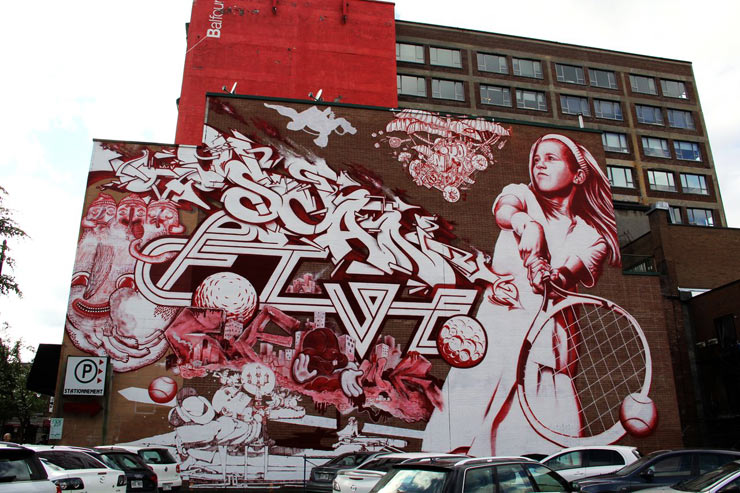 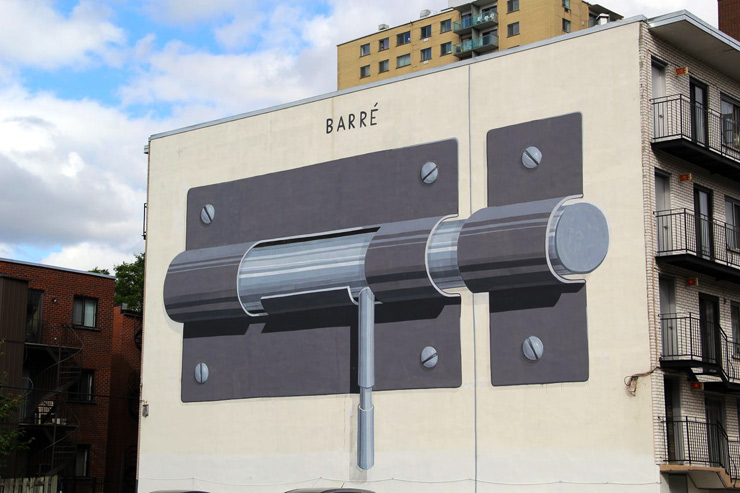 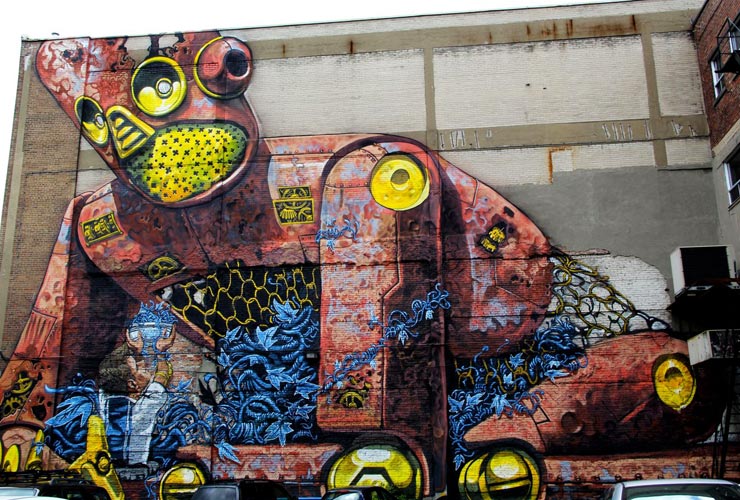 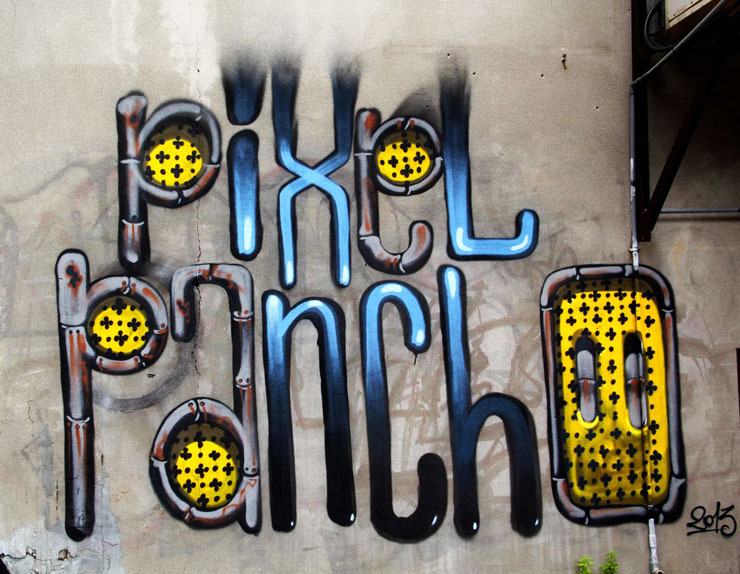 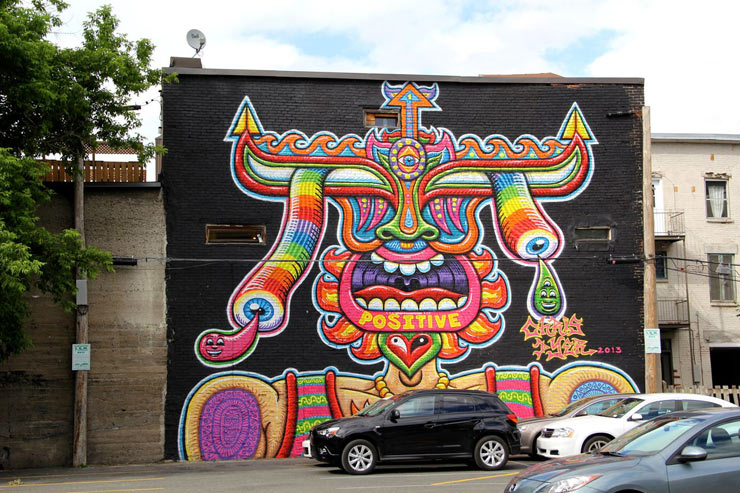 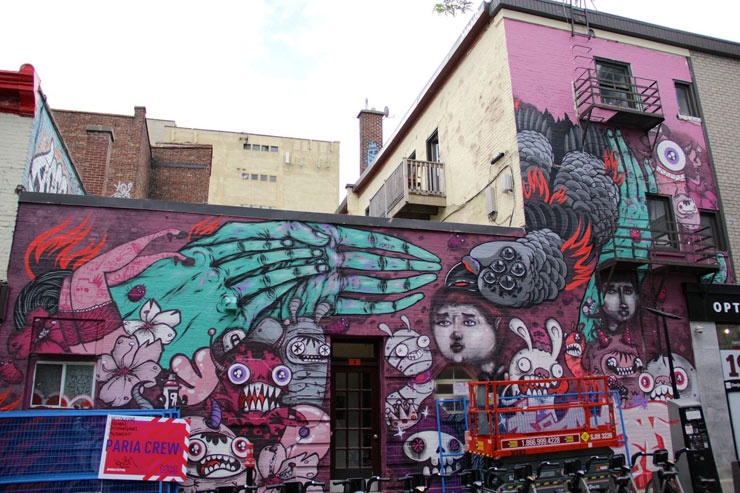 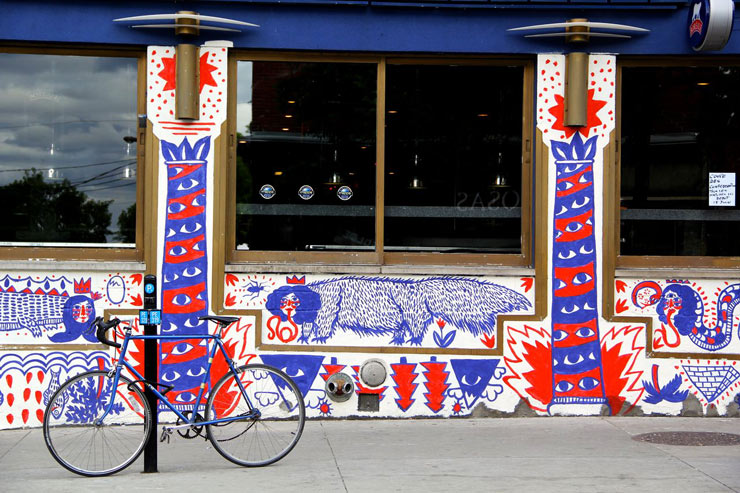 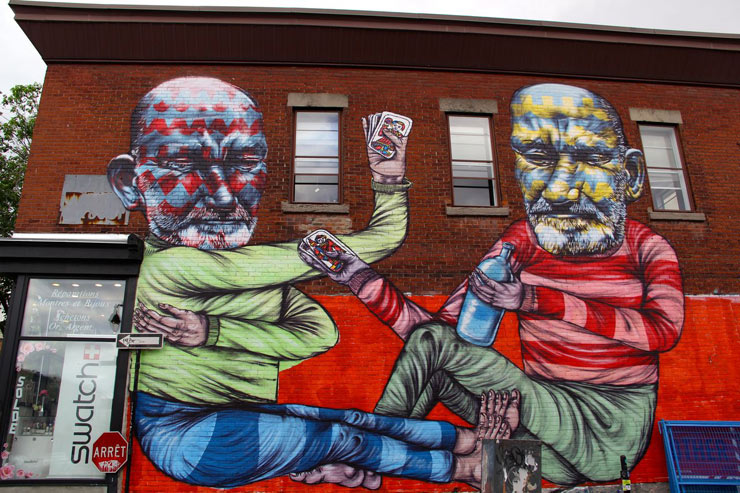 For his participation in the MURAL Festival, it was primarily about coming home for the Canadian artist named Other (AKA Troy Lovegates). "All my spare moments were playing frisbee and catching up with old friends," he says as he describes the events.

But what about the fellows he painted for the wall? Actually, they are two representations of one man, a troubled sort of guy he met recently.

"The painting I did is of a man I met in Ottawa a few days before the festival who was lost and homeless and wanted to return home to Montreal. But he was scattered, laying in a parking lot talking nonsense. He seemed very gentle and I hope I brought back a part of him to Montreal." 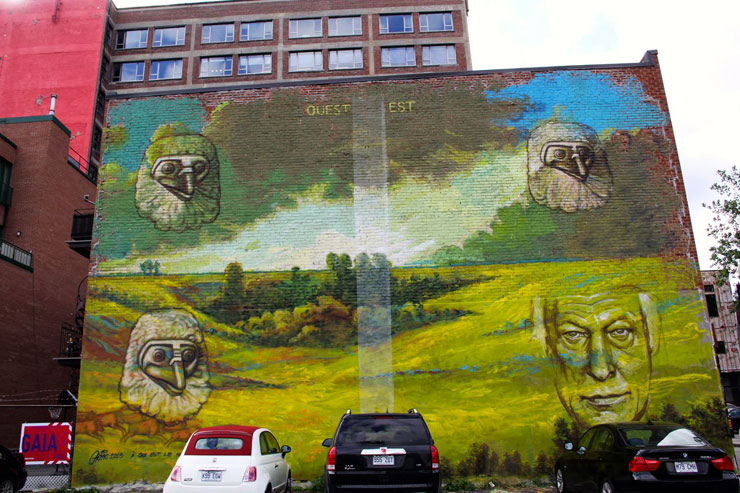 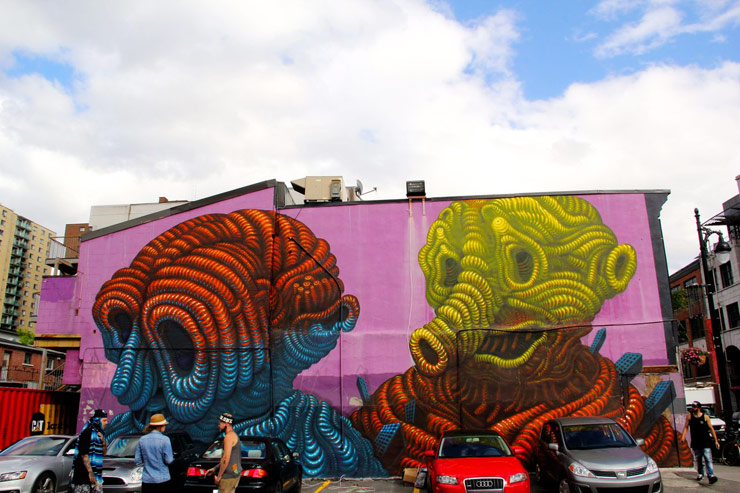 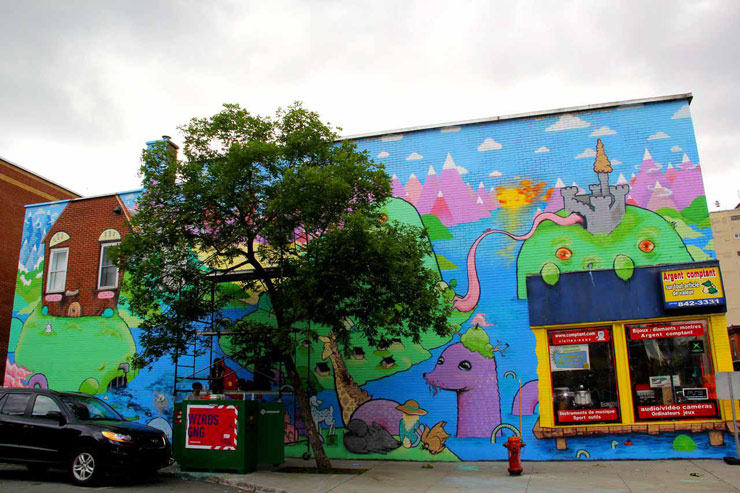