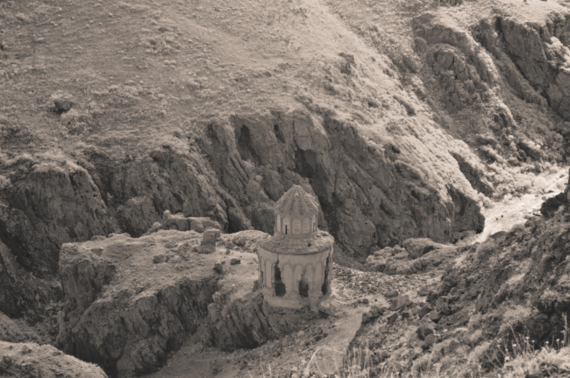 (The St. Sargis Church sits hidden on a ledge halfway down a steep ravine. Photo by Victoria Blewer)

In March I spent three days at "Responsibility 2015," the conference on the Armenian Genocide sponsored by the Armenian Revolutionary Federation held in Manhattan. At the end of the final day, I was at once invigorated and exhausted. I was inspired by the passion of the artists and activists and intellectuals, and I was emotionally wrung out by the realities of imagining for three days the genocide that a century ago this month was commencing.

Digor isn't on a lot of the maps that we Armenian pilgrims follow on our journeys back into the world that was ours once. It's a town of about 2,500 people, mostly Kurds. But it's not far from Ani. It's no more than 20 miles from the Armenian border. The editor of this newspaper, Nanore Barsoumian, has been there. So has her predecessor, Khatchig Mouradian.

At some point in the 1950's, a small Turkish military contingent drove to a rocky plateau west of Digor and placed dynamite inside the five medieval stone churches that comprised the isolated Armenian monastery of Khdzgonk. And then they blew them up.

Most of them, anyway. I had heard that one proud section of the largest of the five churches, St. Sargis, was still standing.

We all know the appalling lengths to which Turkey will go to deny the genocide. We know the government is pathologic; we know that it approaches the culpability of the Ottoman regime with a despicable, Stalin-like determination to rewrite history via lies and bluster and threats.

But if you want to see firsthand the lengths to which the government has gone to deny the historical reality of the Armenian presence on the Anatolian plains, visit St. Sargis. I journeyed there last summer with my family.

St. Sargis is not easy to find. The monastery compound is only eight miles as the crow flies from Digor, but it sits hidden on a ledge halfway down a steep ravine. We only found it because we were traveling with Khatchig, who knew the mayor of Digor, who, in turn, offered us a guide from the village to lead us there.

But we hiked through the desert-like hills to the edge of a plateau, looked down and there it was: St. Sargis. The center of the church and the iconic Armenian dome, despite great gaping holes in the walls, had survived the blast.

I remember wondering when I was climbing several hundred feet down the vertigo-inducing ridge into the sheltered ravine, did the Turkish soldiers lower their dynamite over the side of the cliff with pulleys and ropes, or did they carry it in their packs? Clearly they'd needed a lot: I'd seen black and white photographs of the five-church compound. The churches had been constructed between the 11th and 13th centuries, and they had been built to last.

I've visited a lot of Armenian ruins across Historic Armenia -- perhaps as many as 30 or 40 different monasteries and churches in places that most North Americans outside of our community couldn't find on a map. In some ways, it's reminiscent of visiting a castle keep in Scotland or the ancient city in Rome. The soul wonders at the past and we are left wistful by the ephemerality of our lives.

But here is how it is different: Often these ruins -- while as old as some Roman temples or the remnants of a tower in the Scottish highlands -- were the homes to vital, vibrant and active congregations or monasteries a mere hundred years ago. When Babe Ruth was playing baseball. When Scott Fitzgerald was honing his craft. When Alexander Graham Bell in New York was ringing a fellow named Watson in California.

By the 1950's, when the locals who live in Digor recall the Turkish soldiers blowing up the 5 churches, the monastery had been sitting empty for less than 40 years.

Today much of the rubble has disappeared back into the earth. Scrub brush and dirt have slowly buried the shattered stonework, as well as the walls of the chapels that were blown out and into the nearby crevasse.

The last stage in any genocide is denial. My sense is that's why decades after evicting the monks, the Turks tried to blow up the site -- one of perhaps dozens of churches they would destroy in the 1950's.

It wasn't enough to ethnically cleanse the Armenians from the country; it was important to scour away any trace that once upon a time we had lived there, too -- even in a ravine in the absolute middle of nowhere. My wife and I speculated that the only reason St. Sargis remains is because the soldiers ran out of dynamite and it was too much work to bother coming back to finish the job.

But, as Shakespeare observed, the truth will out.

The full quote is even more meaningful here: "Truth will come to light; murder cannot be hid long...at the length truth will out."

As drained as I was at the end of "Responsibility 2015," I was also confident that we -- Armenians -- are winning. We really are. While so many of our ancestors' voices were stilled, their descendants are speaking more passionately and powerfully than ever. "Long" is a relevant term. A century is but a blink in geologic terms.

You can blow up a monastery. But you can't bulldoze the truth.

(This article appeared originally in the Armenian Weekly. The paperback of Chris Bohjalian's most recent novel, "Close Your Eyes, Hold Hands," was published in May.)