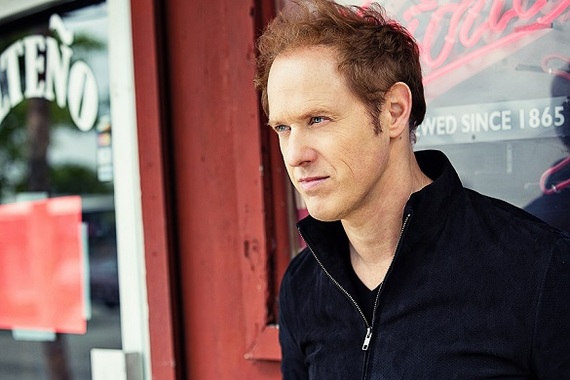 Raphael Sbarge is one of the rare oddities of the world. I'm saying this because his interview answers came over without any errors!

Raphael likes to talk a lot, so he's my kind of guy. Hence, I had to split this up into two sections, so be sure to read Part II!

It's thrilling to be in a comic book. I was a big comic book geek as a kid, starting at around seven years old, until I discovered girls. I still have my comics neatly packed away! Being an actual character in a comic falls into the "bucket list" category of life experiences, for sure (right up there with being on Star Trek, but I digress).

Steampunk is a style and an aesthetic. The look is a combination of industrial revolution and Victorian times, along with modern technology, and is often referred to as Neo-Victorian. It has a huge worldwide audience and Lantern City will be the newest flag bearer for this very cool genre. #steampunk!

You play Kendall Harnick in the comic. Will you be in the Lantern City TV series?

The comic has broken sales records for Archaia (a division of BOOM! Comics). There is a published novel, a huge social media following for Lantern City, an RPG game being created as we speak, a fantastic pilot script completed, artwork and designs are ready for the steampunk world that they inhabit. There are some amazing actors and filmmakers who have joined the team. We are in active discussions and should have something to announce soon. But to answer your question, yes, my plan is to be in a Lantern City television series (my schedule permitting). I love the world, and love the stories the creators have developed.

You founded Green Wish, a nonprofit that helps local green organizations fund projects for their communities. Why did you feel the need to start Green Wish, what do you do on an everyday basis for Green Wish and what kind of projects does it fund? How did you find people to help you build Green Wish?

Green Wish was inspired by the birth of my daughter. I was moved to create something that might help our planet, and address the increasingly important call to action for each of us to do something to try to meet the tremendous need.

We read dire headlines on a daily basis and, as a result, can be taken to a dangerous place of apathy ("It's all so bad, why do anything? Why even try?"). I am a firm believer that we need to remain committed every day to actions that make a concerted effort to create change. I passionately believe that we need to be doing everything we can, every day, with our purchases, our commitments and to think of the next generation that will inhabit this place. I also believe that if you give people a way to help, they not only feel better, but that remarkable things can happen.

While some organizations pressure you to give money based on fear, Green Wish tries to offer you the opportunity to make a difference right in your community. My feeling is that the other approach encourages people to tune out. If, however, there were not just one, but multiple local organizations that were supported, and you knew exactly WHERE the money was going, and you could see the affect you were having, that creates a resounding sense of good feeling and connects people to wanting to do more. We have created a way for passionate people in cities around the country (and soon to be in Canada) to create chapters of Green Wish that give right back into the community, and help fund important local organizations. It's been incredibly gratifying to watch it grow.

You're a videogame voice artist and your credits include the highly acclaimed series Mass Effect 1, 2 and 3 (The New York Times' Game of the Year) and Knights of the Old Republic. How did you get involved in game voice overs? Do you go into a recording studio by yourself and read from a board or do you memorize the lines?

I got involved, as one would say, the old-fashioned way: I auditioned. It is incredible to be a part of Mass Effect, as it's not just a video game - it's a movement. Ha! But in all seriousness, I have experienced it firsthand. Mass Effect and Bioware, the company that created it, went above and beyond to create a role-playing game that redefined gaming. They are, from all reports, the gold standard of gaming companies. Mass Effect is played worldwide and the series spanned more than a decade, and has deeply passionate fans who have created a community that is astonishingly large and impassioned. It's remarkable to be a part of this community.

As to how we do it: Yes, you stand alone in a recording studio (just you and your imagination, I like to say). We are given the script digitally (used to be paper, but now it's on a screen), and the multiple options are recorded over four hours. At the end of it, you are incredibly tired. It's very intense work -- but then thrilling, once you see what the end result is.

I always wanted an older sister, one who would show me the ropes, tell me how things were supposed to go. There were enormous benefits to being an only child, of course (I didn't ever have to share my stuff, and got to hang out with a lot of very cool adults). We had not planned to have two. My son Django (who came second) is one of the true lights of my life. And he has that older sister I had always hoped for. Gracie is 13, and is always more than happy to show him "the right way to do things." (Read: "You're not doing it right, Django! You need to do it like this!"). But, that's his journey. In the end, I know having a sister is hugely beneficial, as they travel through their life together.

Please check out Part II of my interview with Raphael Sbarge!

Murder In The First Games comics Acting Only Child