YOU CAN DO SOMETHING ABOUT IT is a series of frank interviews with passionate men and women who are leaders, activists and influencers on the subject of gun violence in America. Some have been my teachers, champions and support system on this very complicated and emotional journey and some I have admired from afar for their bravery, audacity and indomitable commitment to the cause. Although our backgrounds, experiences and the challenges we face in our work are as complex as the causes and the solutions to this epidemic, all have shown that there is more that can be done to end this senseless loss of human life.
I am proud to introduce you to each of them and excited to share their insights into how all of us can be a part of the solution to 'Raise The Caliber' of our communities. 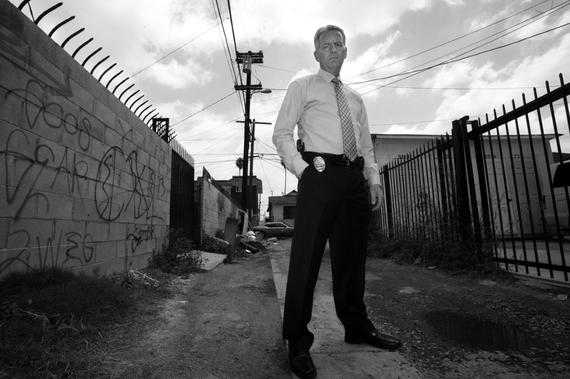 Occupation:
I have been a Los Angeles Police Officer for 29 years and have worked as a Homicide Detective for the past 22 years. Most of my career was spent in Watts and South Central before I transferred seven years ago to West Bureau Homicide which covers the areas of Hollywood, Wilshire, West Los Angeles, Koreatown and Venice Beach.

Where do you live: Los Angeles

What are you most proud of about your work?
First, I am most proud of my work for bringing some form of closure to the family and friends of victims that have been murdered. Many people who have lost a loved one to violence feel better knowing the suspect responsible cannot hurt others and is not enjoying the freedoms that we have.

Secondly, I am proud of the young homicide detectives that I have trained, supervised or had a direct impact upon, who follow my philosophy and treat everyone they encounter with respect and work harder than anyone else to solve murder cases.

What is the biggest challenge you face in your work?
My biggest challenge is gaining cooperation from witnesses and people who have knowledge of individuals who are involved in or responsible for my murder investigations. The vast majority of my investigations have been street level murders involving gangs, narcotics and street disputes. When I have a murder that occurs in a dark alley behind an illicit club at 2:00 a.m., I can promise you that my witnesses will not be preachers, teachers or nurses. They will be people from the streets that obey rules of the streets. Rule No. 1 on the street is, don't be a snitch. So for me to overcome this challenge it is extremely difficult. I, of course, fully understand the fear witnesses have of being intimidated, threatened or killed for helping with a prosecution. However, I feel we must all do our part to get killers off the street. I have never had one of my witnesses hurt or killed and I do everything I can to keep them safe and help them with the changes in their lives that they may encounter. When the court case is over, the witnesses feel a tremendous amount of pride for being brave and doing the right thing.

Why do you think we have such a problem with gun violence in America?
I think the biggest contributor that I see is the lack of a good home environment. There is a lack of nurturing and loving homes these killers are being raised in. The fathers are almost always non-existent and the mothers are often unemployed, on welfare and have criminal records. There is little emphasis placed on education and it's common for the kids to drop out in middle or high school. The youth have little or no respect for themselves, their community or their families. Added to this problem is the strong influence of gangs. If you take a teenager with no self-respect, who is trying to gain stature in his gang or neighborhood, and hand him a gun with instructions to shoot a rival gang member, they generally won't refuse.

There is also a lack of fear these criminals have of being caught for these violent gun crimes.

What do you think is the biggest misconception about why we have such a problem with gun violence in America?
This is another tough question although I'm not sure there are many misconceptions. The U.S. has a lot of guns and too many bad people willing to use guns to harm others.

I know many people say, "guns don't kill people, people kill people." However, I don't think anyone can dispute that pulling your index finger about a half inch on the trigger of a gun is an easy and cowardly way of causing serious injury or death to someone. A gun can be much easier to use and often less personal than using other deadly weapon.

Do you think there is a law that the government could enact that would really make a difference in reducing gun violence and building safe communities?
I don't think we need to enact any new laws. What I would like to see is current gun laws enforced aggressively and consistently. I don't need to name the cities, but during the 1990's the city and state with the strictest gun laws in our country had the highest murder rate. Most of their murders involved guns. Today, one of our cities that has an extremely high murder rate, is also known for having strict gun laws. Another example is Mexico, if you get caught with a gun in their country you will go to prison. However, their gun violence is off the chart.

What I would like to see happen is when our criminal justice system identifies someone as a violent career criminal, every measure should be taken to keep that individual incarcerated. I am all for rehabilitation and second chances for those who have made a bad choice and are trying to redeem themselves, but there are too many criminals with multiple convictions for violent crimes that have no desire to stop their violent behavior, yet we continue to put them back in our neighborhoods, essentially waiting for them to victimize someone else.

What are three things the average American citizen can do to "Raise the Caliber" of their community?
1) Get involved with your community as much as possible. Church groups and service groups are a great base.
2) Be a youth mentor.
3) Have a relationship with your local police officers to keep them apprised of the good and bad things happening in your neighborhood.


What quote do you live by?
The harder I work, the luckier I get.

Is there a book or topic that has educated or inspired you?
I'm not an avid reader but after reading the book Ghettoside by Jill Leovy, I was definitely educated. My work is always on the back side of violence, meaning I focus on investigating and chasing murderers after the crime occurs. The book enlightened me to the historical and social impacts of violence in our country and what may be some contributing factors. What inspired me with reading the book, is the hard work by many dedicated police officers and the brave citizens that step forward to impact violence in their communities.
***

Jessica Mindich began the Caliber Collection in January 2012 as a collaboration with the Mayor of Newark, NJ, Cory Booker, as a way to turn illegal and unwanted guns from our cities' streets into jewelry. Their vision was to create a virtuous cycle by funding gun buyback and amnesty programs from the proceeds of the sales from the Caliber Collection. The jewelry is made with the serial numbers from illegal guns and the metal from shell casings. The Caliber Collection donates 20% of the net proceeds to fund voluntary gun buyback and amnesty programs in some of the toughest cities in America. To date, they have taken over 1,000 illegal guns off the streets and have raised over $100,000 for police departments in Newark, Hartford, the San Francisco Bay Area and Detroit from the sale of Caliber products to customers in over 85 countries.