The Republic of Tuva is the weirdest place I have ever been. It has the highest murder rate in Russia, is the fourth poorest region in the country, and also happens to be the geographic center of Asia. It is famous among philatelists--or stamp collectors-- for the non-standard postage stamps that it issued during its short period of independence as the People's Republic of Tannu-Tuva, and was also the sight of President Vladimir Putin's famous topless horseback photo-shoot.

However, the coolest thing about Tuva is the throat singing. For the uninitiated, throat singing is a technique that divides the human voice into its constituent parts, much like a prism does to white light. Every vocalization from our vocal chords is composed of many tones, some high and some low. The Tuvans isolate the highest overtones, which create a whistling sound that can be controlled independently to play a melody over the droning hum.

Tuvan throat singing is something of an acquired taste. It has not always been well received by the American palate, as was evidenced back in 2010 when a Portland man named Soriah tried to demonstrate his impressive throat singing skills on America's Got Talent and was booed off stage. 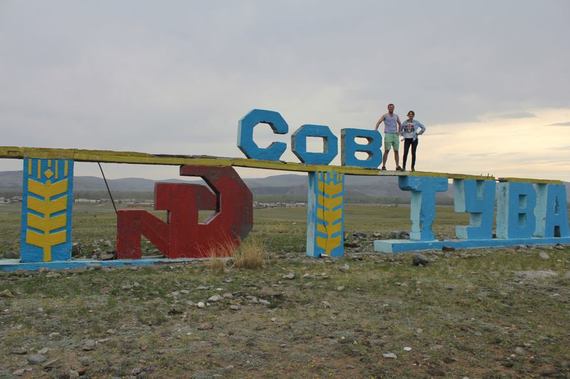 I saw throat singing for the first time in high school on YouTube. I tried to imitate the drone and coax the overtone out, until my father started yelling from downstairs for me to shut up. I did not give throat singing another thought until I got to Tuva.

My friend and I heard about a horse race that was going on a few hours outside the capital. We hopped into a marshrutka mini-bus and rode to an encampment of Tuvans out on the open steppe. The women were frying meat pies over open fires, and we were getting odd stares from men on horseback. Throngs of dusty villagers crowded together to cheer the racers in, or to watch young guys in silk sumo-diapers wrestling--Tuva's most popular sport.

There were a few yurts set up, so we went over to one and got ourselves invited in by adeptly playing the foreigner card. Inside, we were offered big trays of dumplings and unidentifiable hunks of mutton. Mutton, if you have never tried it, tastes the way a barn smells: like fermenting funky hey with a hint of manure. We washed it down with "Mongolian tea," which is black tea with milk and salt, and tastes as bad as it sounds.

Then the guest of honor arrived. Aldar, we were told, is one of the most famous Tuvan throat singers in Tuva, and thus the whole world. He and his band, Chirgilchin, have even gone on tour in the United States and Canada. But, he was here on the steppe, in his brother's yurt playing a private show for friends, family, and the accidental American and Brit.

He played on a homemade igil and his overtones came out high and clear. The music is meant to evoke the sounds of the steppe, and it really does call forth images of hawks, mountains, horses and streams. The wind beat against the cloth yurt and dust came through the opening at the top, coating our discarded sheep bones and making the tea gritty.

My throat singing is coming along very slowly. It is hard to find a good place to practice, since most people find it extremely annoying. I have started to be able to eke out an overtone, but it is fleeting and hard to control. Still, I have high hopes that one day I will be able to impress select friends and maybe even family with my Tuvan throat singing.