Was it suicide or was it murder? The relentless family of young mother Michelle O'Connell believes they may finally have unearthed the answer. Matt Doran flew to Florida to investigate a discovery that some say could have devastating consequences for those in power. 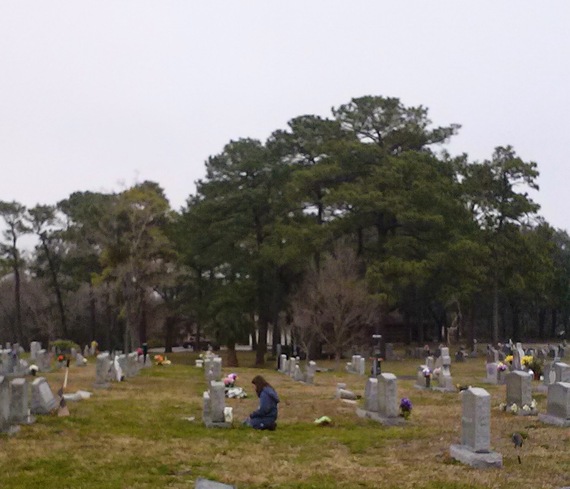 Alexis O'Connell, 9, says a prayer at her mother's grave.

Crouched in fresh dirt on her mother's grave, it's impossible for nine-year-old Alexis O'Connell to comprehend the gravity of what's happened. And yet, her mind full of hope and horror beyond her years, she knows enough to believe her mother is a step closer to peace.

"We want justice for her," Alexis says in a tremulous voice, showing me a picture she's drawn of her mother as an angel. "See, that's her looking down on me and saying, 'don't worry, everything will be OK'.''

It's precisely that sort of intractable faith that has sustained and motivated the family of Michelle O'Connell for more than half a decade. While police maintain she shot herself, her family says her boyfriend - a deputy with the St. Johns County Sheriff's office - undoubtedly pulled the trigger.

But now, after deciding to exhume the 24-year-old's remains for a new autopsy, a big development that's being treated as grim success: a bombshell finding from the medical examiner who studied her body.

"The manner of death should be considered homicide," Dr. William Anderson writes in his autopsy report. In a case that has for years been labeled a suicide, the claim is staggering. If Dr. Anderson is wrong, he will likely find it difficult to work again as a pathologist in Florida. But if he is right, he may help put a suspected killer in prison and vindicate a family that for years has been ridiculed as a bunch of conspiracy theorists.

"We've been telling them all along we knew she didn't kill herself," says Michelle's mother, Patty. "The evidence is there for them to do something with it now." That evidence, according to Dr. Anderson, is as follows: Michelle's jaw was broken prior to death - either with a fist or the butt of the weapon - and her tongue was in a position highly atypical for a gunshot suicide. In other words, the position of the gun in her mouth was such that she would have been gagging or suffocating prior to the trigger being pulled, indicating the gun was forced into her mouth rather than placed there.

"The findings are most consistent of blunt force trauma causing incapacitation of Ms O'Connell, and subsequent gunshot wound inflicted by another," says Dr. Anderson.

And yet police, along with Banks' lawyer, say that conclusion flies fantastically in the face of fact.
"Molesting Michelle from her place of rest using some freelance type approach is beyond unconventional, it was reprehensible," Sheriff David Shoar writes in a statement.

"A paid expert witness (was) hired by these family members to produce a report that of course would support their belief about this case."

And so, with Michelle now reburied, the standoff continues, and consensus continues to prove elusive. So what really happened that night in September 2010? The truth of course varies wildly depending on who you ask. Police are unambiguous: Michelle took her boyfriend's state-issued handgun and killed herself. She misfired once, before getting it right the second time when she fired a fatal shot through her throat. Case closed.

Her family tells a much darker story. They say the young mom was brutally murdered by her partner, Jeremy Banks, who they allege flew into a blackout rage when Michelle told him the relationship was over.

"Her bags were packed and she was leaving him that very night," Patty says.

"She would never, ever have left her daughter Alexis behind. To give you an idea of the depth of her love, when she went skydiving one day she wrote a note to Alexis in case anything should go wrong. This was a woman whose life was dedicated to her daughter. She would never have gone without saying goodbye."

And yet there was no note. And there were a number of other peculiarities at the crime scene. The gun was found by Michelle's left hand, which her mother found odd since Michelle was right-handed.

A bloody shirt with an apparent bullet hole was photographed near the body, and yet inexplicably, was never collected into evidence. Neighbors who passed an FBI polygraph reported hearing screams before the two gunshots, but ultimately they were deemed not credible.

Jeremy Banks' DNA was not found on his gun, despite him using it at work that very day. And a day after the shooting, another witness would claim they heard Banks say in a bar, "the bitch got what she deserved."

And yet, three officially sanctioned medical examiners, along with two special prosecutors appointed by the Governor, all determined there is no evidence to indicate anything other than Michelle died by her own hand.

And so what now? The family claims that the weight of evidence now demands that the case go before a grand jury. Certainly, prosecutors have proceeded in the past with less, explains Michelle's sister, Jennifer.

"As a family we shouldn't have to be forensics experts or political campaigners," she says, wearily, her eyes unlit. "But we have no choice. We've been failed, and let down, and denied justice, and ridiculed as crazy. Well, now it's time to let a jury decide."

Much is at stake for both sides. A murder charge now would not only destroy Banks' career, it would trigger claims of a cover-up that would contaminate the entire county. It's easy to see why officials might be disinclined to re-investigate. And for the family, a dismissal of their theory now would leave them slimed with guilt - forever the family that refused to accept a tragic suicide, so obstinate that not even brutal fact and truth could assuage their doubt.

One thing is for certain, no matter how invulnerable the state case may seem - this one is far from a slam-dunk. One need only look at the official death certificate to appreciate the conflict here - the official cause of death for this suicide has been curiously amended to read, 'shot by another'.

"This entire fight, is a fight for her," says her grandmother, Patty. "One day when she's old enough, she deserves to know the truth, whatever that truth may be. But I will not allow her to grow up in the mistaken and crushing belief that her mother abandoned her."

Matt Doran is the host of the national TV program Crime Watch Daily. For more of his exclusive report on this case, vist Crimewatchdaily.com.