As Rupert Murdoch sat before the U.K. Parliament's Culture, Media and Sport Select Committee on Tuesday, claiming that he was nothing if not contrite about the recent allegations of his company's phone hacking, London comedian Jonnie Marbles rushed forward to smear a paper plate covered with shaving cream in the media executive's face.

While Murdoch dealt with the unexpected "pie" to go with his humble, Murdoch's wife, 42-year-old Wendi Deng, reportedly a former volley ball champion, delivered an impressive overhand smash to the head of Mr. Marbles. In the end, the pastry perpetrator was arrested without offering an explanation for his actions, and the media was barely able to capture the decisive moment which happened just off-camera. Meanwhile, reporters from the Washington Post to Bloomberg news expressed sympathy with Murdoch in the attack.

James Kirkup, a Political Correspondent for the Daily Telegraph who was sitting close enough to Murdoch to get shaving cream on him, wrote this eyewitness account:

"Given the passions Mr. Murdoch evokes, it may be that there are some people who think that some sort of rough justice has been done today. Personally, sitting 10 feet away, all I saw was an 80-year-old man, trying to have a civil conversation, being struck in the face."

To get a professional and season perspective on the pie attack, I spoke with Aron Kay, once known affectionately throughout the pasty heaving world as "The Pie Man." Kay, while now retired although still politically active, is perhaps the person most responsible for turning the word "pie" into a verb (v. "Pie-ing": The act of throwing a pie at a person. This can be a political action when the target is an authority figure, politician, or celebrity and can be used as a means of protesting against the target's political beliefs, or against perceived arrogance or vanity. Perpetrators generally regard the act as a form of ridicule to embarrass and humiliate the victim. In some U.S. states pieing may conform to definitions of the crime of battery, but not assault. - Wikipedia.)

Kay was responsible for a string of serial pieings in the 1960s that left no outspoken conservative feeling safe from fruit filling (and whipped cream), most famously anti-homosexual activist" and orange juice spokeswoman, Anita Bryant, who was "pied" by a Kay disciple on October 14, 1977:

Kay put a pie in the face of commentator William F. Buckley, Watergate criminals G. Gordon Liddy and E. Howard Hunt, among others, and finally retired in 1992 after pieing right-wing activist Randall Terry.

[Left to right: Kay pied New York Mayor Abe Beame during a mayoral debate on August 30, 1977; a disciple, Thom Higgins, pied Anita Bryant on October 14, 1977, to which Bryant famously responded "at least it was a fruit pie"; and Senator Daniel Patrick Moynihan was hit with a pie thrown by Kay on September 5, 1976 on the corner of Orchard and Delancey Streets in Manhattan.]

Kay, whose web site reportedly contains the pronouncement "Because the State won't smash itself," critiqued the Murdoch incident, and called Marbles, who smeared a paper plate covered with shaving cream on it over Murdoch's face "an amateur," noting "he had the attention of the world. He should have had a statement to read. Or someone with a statement to say why he did it. He should have had his own press person ready with a statement. You want to make a big splash."

Kay also noted that without his own cameraman, what could have been a seminal image of the pie covered Murdoch, was lost as Marbles was relying on the assembled media, and they missed the shot. "He should have had his own video person waiting. When it was time to do it, he would have had a shot for the media. You don't depend on the other press. People saw what happened, but you want to have a picture of him with pie all over his face. He could have knocked this assh*le [Murdoch] off of his pedestal, and I don't think he did it."

Kay, whose website maintains a shrine to his pieing exploits as well as his friendship with fellow-Yippie Abbie Hoffman, said his work may have served as the inspiration for those like Marbles, but "there were people who came before me, like Tom Forcade," the editor of the pro-Pot "High Times magazine, who carried out the first Yippie pie attack on May 13, 1970, against Otto Larsen, head of the U.S. Commission on Obscenity and Pornography. 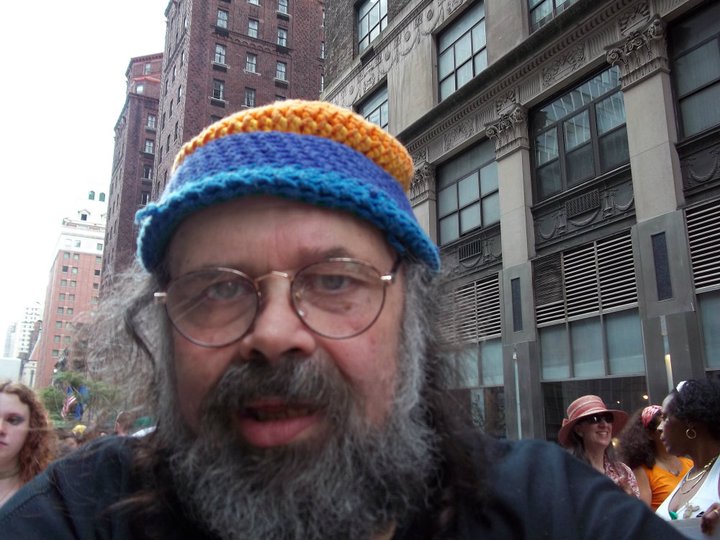 "There are many articles about the [Murdoch] pieing but they don't get the point of it. It's political pieing. You have to make your point." Kay, who calls himself a "Marxist/Lennonist" in the tradition of "Groucho Marx and John Lennon and the Firesign Theatre" says he has one word of advice to those who would use pasty to create political theatre: "Let a thousand pies fly."