They showed up like a new version of Sanford & Son. A father 'n' son team who trade in junk.

Murdoch Senior's startling Parliamentary debut was a sight to see. At times he evoked Richard Nixon's maudlin Resignation Day departure speech (Milhous: "Nobody will ever write a book, probably, about my mother... My mother was a saint...". Murdoch: "I just wanted to say that I was brought up by a father who was not rich but was a great journalist"). His glib son reeked of post-Yuppie sheen. A well-heeled trust fund brat dipped in Mazola and oozing entitlement, Tony Robbins-style biz jargon and faux expressions of regret. His transparency was almost sincere.

The subtext of what was on display were the fruits of Murdoch's legacy to the British people. London has ceased to be the quaint whimsical land of the Carnaby Street era. England no longer "swings like a pendulum do" and the "bobbies on bicycles two-by-two" of yore are now corrupt cops in Porsches purchased with the bribes and kickbacks that are the standard currency of Murdoch's News International.

We heard about multimillion pound pay-offs to phone-hack victims that apparently didn't come to the attention of either Murdoch -- even though Murdoch pere is a notorious control-freak who phones his editors frequently just to enquire "what's happening?" Apparently paying vast bribes and hush money weren't important enough to be mentioned to the boss.

At one point Rupert -- who was seated next to one of his two sons 38-year-old James (other son Lachlan, age 39, was not there) -- talked of his relationship with the last British Prime Minister Gordon Brown who also has two boys (currently aged 5 and 7). He often socialized with the Prime Minister: "our children played together" he explained helpfully. For the uninitiated who don't know the details of Murdoch's own messy tabloid love life, this might have been confusing. Visions were conjured of the back yard of 10 Downing Street... the two Brown toddlers playing choo-choo trains with the two Murdoch boys (some thirty years older) all four boys in short trousers -- while daddies Rupert and Gordon sat enjoying a glass of Australian Chardonnay and discussing details of Britain's debt crisis.

But students of Murdoch's personal loyalties know that he sheds wives as a lizard sheds skins and he produces spawn with equal alacrity. A daughter with wife #1, two sons and another daughter with wife #2, and finally another brace of daughters with wife #3 -- a young tigress merely 38 years his junior. So it was apparently his latest batch of young sprogs who frolicked with the Prime Minister's offspring.

With so much testosterone that has coursed through the Murdoch veins and the stress of having to be held accountable to the elected representatives of the nation he has had an iron grip on for four decades, it was natural that the 80-year-old Murdoch would have a personal nurse on hand to help him with any health needs that might arise. And indeed viewers saw immediately behind him a very pretty pert Asian woman in a stylish puce-colored outfit (from designer Cathay Pacific's chic Stewardess line). But that was no nurse. That was wife #3 Wendi Deng (born in China in 1968 as Deng Wen Di) who also doubles as his bodyguard. When an agit-prop prankster approached Murdoch armed with a lethal paper plate containing shaving foam, it was the Crouching Tiger, Hidden Dragon Wendi who leapt to her feet and assaulted the "attacker" who dared to approach her inheritance. 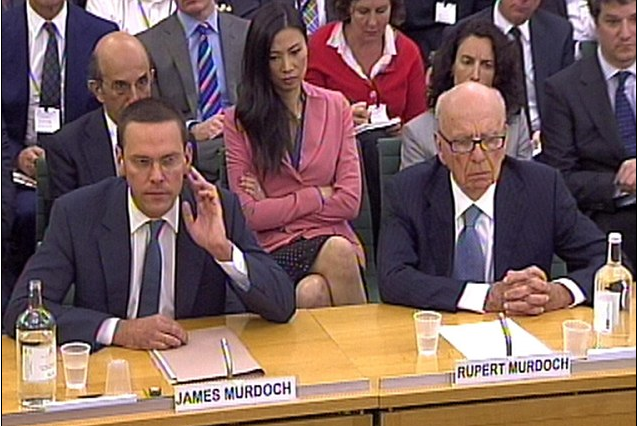 Deng is a story unto herself -- she'd already shed her own first American spouse after two years marriage by the age of 22 (though the union was not entirely wasted as shortly afterwards she gave birth to a beautiful bouncing nine-ounce Green Card that she kept custody of). When the impoverished 29-year-old Deng (then interning at a Murdoch company) met the 66-year-old multi-billionaire Murdoch in 1997, it was apparently love at first audit.

The prankster's interruption led to a bizarre exchange when the committee session reconvened after Rupert had shed the jacket of his shaving foam-spattered $10,000 bespoke suit. He was commended by a fawning Conservative MP named Louise Mensch for his "immense courage" in returning to face questions. "Immense courage"?! In the face of a paper picnic plate of Gillette Foamy?! These are the teeth of the parliamentarians who are supposed to be grilling Murdoch. Sounded more like a hummer to me...

But where did this Grave New World come from? What happened to the Britain of the 1960s and 1970s that gave America and the world the Beatles, Stones and Monty Python? Four decades on and the UK's equivalent exports are Simon Cowell, Piers Morgan and Susan Boyle. Sneer, smarm and a shamelessly-exploited yokel.

The roots lie in the British 80s and 90s -- two decades defined by the "chav" and "spiv" culture that was the fruit of the Murdoch 'n' Maggie (as in Margaret Thatcher) union. "There's no such thing as society" Thatcher famously declared in 1987. "We are in the entertainment business" declared Murdoch after proceeding with printing the Hitler Diaries in his flagship quality newspaper The Times even AFTER he'd been told that they were indisputably fakes.

The simple fact is that in 1968 -- just as wife #3 Deng was being born in Shandong province, China, the Australian born Murdoch was landing in the Mother Country Britain. He shrewdly gobbled up newspapers (The Sun, News of The World, The Times, The Sunday Times) and then transformed them into his personal instruments of power. He used his newspapers as weapons that made politicians seek his blessing and support. He patronized and promoted the shrewish Margaret Thatcher and championed her Long March to becoming Conservative party leader in 1975 to Prime Minister in 1979 and throughout the 80s. He enthusiastically supported her union-busting tactics in the 1980s and she returned the favor by sanctioning the use of massive police deployments to intimidate picketing strikers outside his print plants as he "downsized" printer unions by the simple act of sacking thousands of loyal employees.

The culture his British newspapers and Thatcher's 11-year regime promoted was about greed, shallow values and a sneering disdain for 60s idealism and progressive values. The glib, East-Enders society Britain "enjoys" now of Posh Spice, Big Brother, crass reality shows, vicious talent "discovery" shows (which are actually about ritual humiliation and making a fast easy buck off a gullible public) are all spawn of that political-cultural marriage between Rupert Murdoch and Margaret Thatcher from 1975 to 1989 and its aftermath in the 1990s.

The callous tabloid reporters and paparazzi... the slick PR spivs... the glib ad agency operatives -- now self re-branded as "strategic marketing" companies who talk about "maximizing engagement opportunities" and "developing a vertically integrated synergy" -- that is the legacy. Now it is coming back to bite him.

And Murdoch found it difficult to even feign acting contrite. As one of his political heroes Richard Nixon once remarked "Contrition is shit".

For Murdoch it's all turning to Merde...

"Hands off my inheritance!"