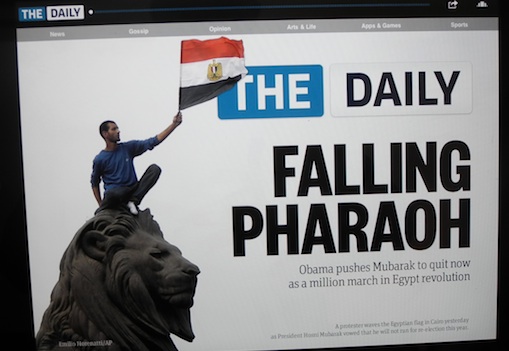 Like a morning paper, the cover story of The Daily focuses on yesterday's news.

I really wanted to like The Daily, the new iPad-only newspaper from Rupert Murdoch's News Corp. The idea of a 21st century newspaper that combines, text, graphics, video and social networking in a single app is very appealing. And the iPad is a great delivery platform for the content. I was also impressed by the effort News Corp put into this venture. With an initial investment of $30 million and a good-sized staff of journalists and media artists, The Daily plans to deliver up to 100 pages a day of content.

Like printed newspapers, The Daily is divided into sections: News, Gossip, Opinion, Arts & Life, Apps & Games and Sports. But it doesn't look at all like a newspaper. From an appearance standpoint, it's better. Its closer to what you'd expect from a high-end glossy magazine only better still because it infuses multimedia elements into the copy -- something that's impossible to do with print.

But despite its fabulous appearance, I found The Daily to be disappointing mainly because the news was already out of date. The company says it plans to update the online newspaper throughout the day, but there was no evidence of that on day one. The cover story, "Falling Pharaoh," did a pretty good job of covering yesterday's news including the subhead "Obama pushes Mubarak to quit now as a million march in Egypt revolution." That was accompanied by some gorgeous photos from yesterday's demonstrations and some sidebars about activism in Syria and Jordan and a profile of Mubarak's sons. All of this was great but as I was reading it, TV and radio news and all of the web-based news services were telling today's news, about counter-protests in Tahrir Square and violent clashes between pro and anti-Mubarak demonstrators. I found none of this in The Daily nor did I see any reports about Egypt turning the Internet back-on; a subject that I and multiple other online journalists had already covered.

The newspaper also lacks a technology section which surprised me considering that 100% of its readers are at-least tech-savvy enough to own an iPad.

For the next two weeks, The Daily is free but after that it wil cost 99 cents a week or $39.99 a year. As newspaper and magazine prices go, it's a good deal but I have the same problem with Murdoch's iPad app that I have with his printed publications which, by the time they hit my driveway, have old news. I'm not saying there isn't a role for newspapers (I still write a column for both the dead-tree and online editions of the San Jose Mercury News) but I think many people have become accustomed to news that's updated very often throughout the day. There is still a role for analysis, opinion and long-form journalism which is why magazines still have their place but if you're going to create an electronic news source it had better be more than up-to-date. It has to be up-to-the-minute.