This is one of the most spectacular animal phenomena known to man.

A murmuration, or flock of starlings, here includes thousands of these tiny birds collectively flying and swirling about. The mesmerizing act is typically seen at the beginning of winter, right before dusk, as the birds look for a place to roost for the night.

During the action, birds reach speeds of up to 20 mph.

In the video below, Vimeo user Sophie Windsor Clive captured an incredible example of the event on the River Shannon in Ireland. Clive and her companion, Liberty Smith, just seem to happen on the event as they were canoeing across. It was an amazing treat neither of them ever expected to see.

According to the Telegraph, what makes it so beautiful is actually a survival function:

“Numbers build up slowly near the roost over the afternoon as small groups of birds return from foraging in the area,” explains Paul Stancliffe of the British Trust for Ornithology. “By late afternoon there is a huge swirling cloud. It’s all about safety in numbers – none wants to be on the outside, none wants to be first to land.”

Essentially it's an epic battle to determine who in the flock survives, and who's a target for predators. According to the Telegraph, each bird tries to copy the bird next to it exactly, which results in a stunning rippling effect.

Be sure to check out the video below to see the spectacular sight for yourself, and scroll down to take a look at photos of the stunning event:

Check out these images of a murmuration of starlings at Gretna in Scottish borders, taken on November 1, 2011:

Clarification: Language has been added to indicate that a murmuration is any flock of starlings, and not specifically one that exhibits this particular behavior. 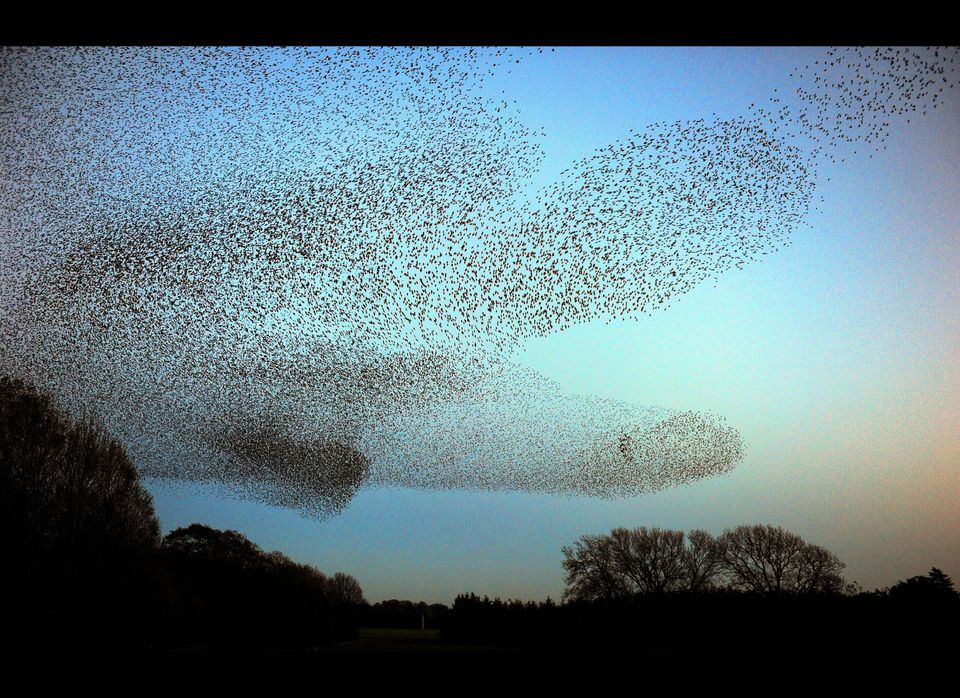 1 / 6
A murmuration of starlings signal winter is on its way as they arrive at Gretna in Scottish borders. Tuesday November 1, 2011.
Owen Humphreys/PA Wire