CHICAGO - Pasta maker SpaghettiO's wasn't the only business to make a massive promotions blunder on Saturday's 72nd anniversary of the attack on Pearl Harbor.

The popular Murphy's Bleachers bar in Chicago's Wrigleyville neighborhood apologized "to our whole country" after making itself the target of criticism over an ill-conceived message posted on its outdoor marquee Saturday.

Shortly after, the bar tweeted "This awful marquee has been taken down. We apologize for the actions of our staff to our whole country."

The bar also took to its Facebook page to apologize for "the actions of [our] staff":

The Tribune's Peter Nickeas shared what appears to be the bar's attempt to smooth things over with the public with the latest update to the Murphy's marquee:

The sign at Murphy's, sent from a follower: pic.twitter.com/NWIL9882OB

Murphy's Bleachers joins businesses and brands like AT&T, Groupon and other companies that produced controversial promotions and "remembrances" for events like 9/11 and Hurricane Sandy.

Saturday marked the 72nd anniversary of the attack on Hawaii's Pearl Harbor in which more than 2,500 people lost their lives. 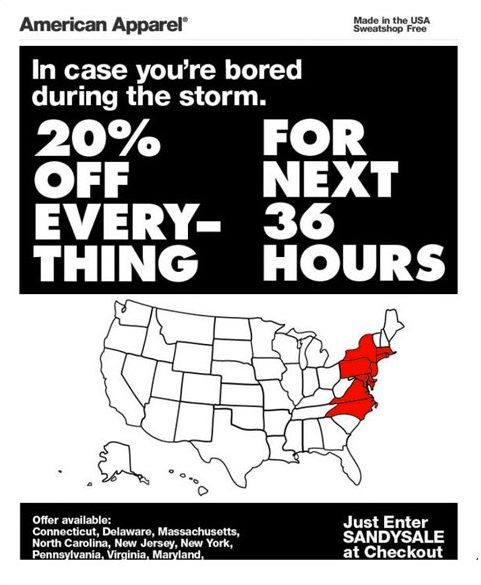 1 / 7
American Apparel
As the East Coast battled Hurricane Sandy on Monday night, retailer <a href="https://www.huffpost.com/entry/american-apparel-hurricane-sandy-sale_n_2045739">American Apparel put out an email blast offering 20 percent off </a>all items in nine East Coast states. The much-criticized header: "In case you're bored during the storm" didn't help matters. <a href="https://www.huffpost.com/entry/american-apparel-hurricane-sandy-marketing-dov-charney_n_2056410">CEO Don Charvey compounded the controversy</a> by later saying the ill-timed sale was "not a serious matter."
American Apparel