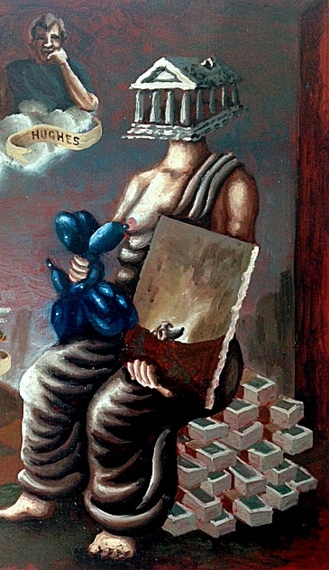 The Muse of Art Criticism: Image by Matthew Couper

(Not Reuters) - Pablo Art Market-Criticism, the eldest son of the muse and allegorical figure Art Criticism has confirmed reports circulating earlier today that his mother has been hospitalized. Speaking to several reporters gathered outside his offices in Chelsea earlier this morning, he issued the following public statement:

As many of you know, my mother has been under considerable strain since her separation and divorce from my father, The Art Market, in early 2013. I can confirm that after an unfortunate incident last week, she was admitted to a private psychiatric hospital where she is being treated for stress and severe nervous exhaustion. We ask that the public respect her privacy during this exceedingly difficult time.

Reached by telephone the next day, her friend Academic Eminence provided a few details about the "unfortunate incident" that may have triggered Art Criticism's breakdown. "We had decided to see the Björk Retrospective at MOMA last Friday and then grab some lunch afterwards, but I'm afraid we never made it to lunch. The long lines and the endless looping Björk clips put Art Criticism in a foul mood, and when we got into the actual exhibition she simply lost it."

Art Criticism's meltdown, reported first on Twitter and then on Buzzfeed, included the Oxford-educated muse tearing off her headphones and hurling them at a translucent mannequin wearing an Alexander McQueen wedding dress. Although there are varying reports as to what she was screaming while being escorted from the exhibit by museum security guards, several onlookers concur that they heard her exclaim: "Get me out of this fucking Icelandic-themed techno-crap hellhole."

After exiting the museum, Art Criticism drank Evian water while sitting on the curb, sobbing and telling stunned passersby: "This is the museum that gave Mark Rothko his first retrospective. I can't believe I just paid $25 to see pierced nipples and yak heads. I'm so done with this..." Moments later, she was strong-armed into a cab by several friends, still visibly agitated, and driven away.

Christie Sotheby's, a longtime friend of both Art Criticism and her ex-husband The Art Market, says that Art Criticism has been feeling "ignored and powerless for some time."

"It hurts," Sotheby's explained, "to see your influence fade so fast. Art Criticism once had the power to make or break an artist, but those days are gone. Plus, when people say that you could simply be replaced by Instagram, that really, really hurts."

Another source, an independent curator who declined to be named, believes that the continued success of the Art Market has left his ex-wife exceptionally jealous. "He is wined and dined by billionaires every day" the source commented, "while she can barely find work. Writing art criticism doesn't pay much these days, and nobody actually reads ARTFORUM anymore. They just look over the glossy ads."

Musée M. Bord, another family friend offered a frank perspective. "Art Criticism has said some very harsh things through the years, and that has understandably left many people angered. We are in a populist era now, and people want Top Ten lists not tantrums. She shouldn't be surprised that even art world professionals would rather just follow celebrity critics posting Medieval penis pics on Twitter."

"Of course," Bord continued, "as long as I have known her, Art Criticism has been in a state of perpetual meltdown, and we have disagreed about many, many things through the years. Honestly, I thought Björk was a lot of fun. At any rate I wish her well, and expect that she will make a full recovery."

Her ex-husband, The Art Market, who is traveling in Asia, could not be reached for comment.