His poetry saved my life.

I first saw slam-o's mysterious poetic aphorisms in downtown Philadelphia four years ago. They appeared when I started working as a stand-in for a lead actress on a television show. On my way to work, it stopped me: 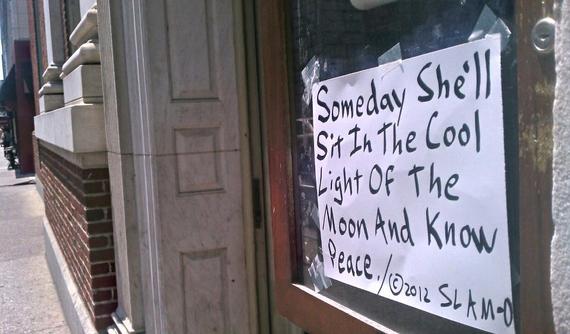 I considered taking the poem home with me. After all, it was affixed to the window with Scotch Tape. All I needed to do was to pull it down. I wanted to keep it, to keep seeing his message. Maybe on my fridge or on my bathroom mirror. Or on my wall. But I left it there, out of respect for slam-o and for anyone else who needed it.

A few days later, one hazy Philadelphia morning when I was on my way to work again, I saw another slam-o post on a nondescript door. A man wearing a grey hoodie hastily secured the white poster board to a dirty Philadelphia wall with Scotch tape. By the time I ran towards him, he was gone. But his poem stayed: 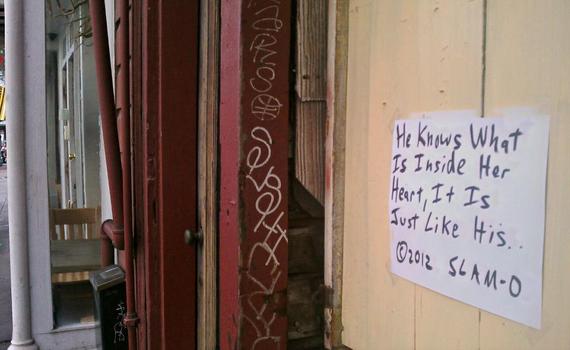 It was if he were following me around, hearing my thoughts, responding with messages that were meant only for me.

It was if he knew that I was going through a rough time and needed to hear exactly what his black, hand-painted letters said.

One day on set, I noticed that Alan, one of the show's camera operators and cinematographers, was wearing the same grey hoodie. Was it a coincidence?

A few days later, he came up to me at lunch. He said that he had noticed me reading poetry during my down time. As it turned out, he loved Pablo Neruda too. Then he showed me his phone, asking if I'd seen slam-o's poetry on the streets. He showed me photo after photo of the poems on his phone, many of them familiar, many of them I had not seen.

Before he could answer, the director called him over to the monitors to discuss a close-up of Sigourney Weaver. Slam-o was gone.

After he left Philadelphia and returned home to Los Angeles, he friended me on Facebook. He continued posting poems wherever he traveled. Whenever I saw a new poem appear on my newsfeed, it was all I could think about. I was inspired to post my own poems. I signed them with the name "your Italian hope." 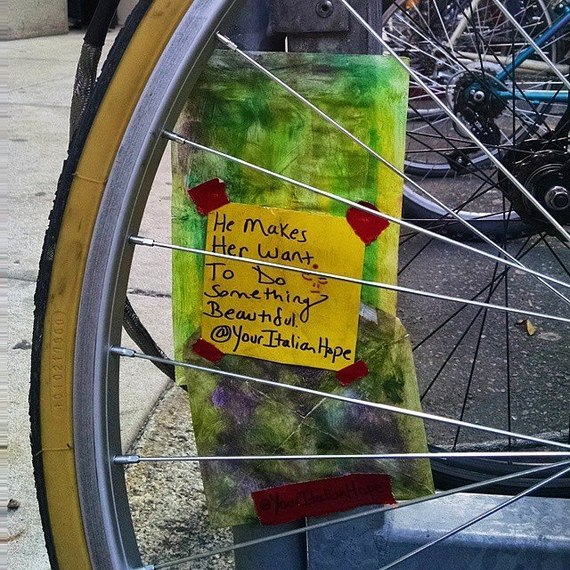 When he traveled to Hawaii to work on a commercial, the poems continued, each one more magical than the last. 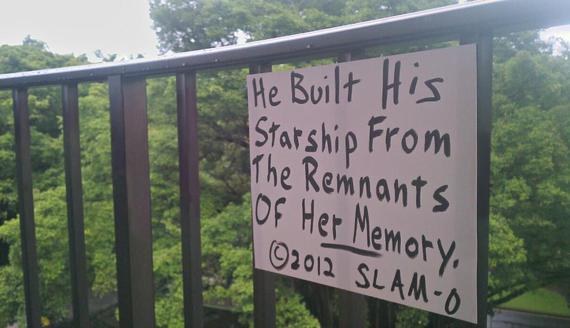 Even though there were hundreds of poems that dealt with many different subjects, when I scrolled down his Facebook page, I knew some were for me.

The day before he left Philadelphia, he had given me his mint plant that sprouted in his city windowsill throughout his four-month stay in my city. The plant continued to thrive, long after he left. One of his Hawaii posts was this: 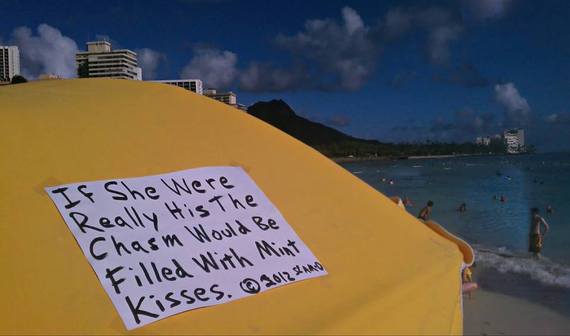 I missed seeing slam-o in person. I missed seeing his signs on the streets of Philadelphia. Those bold black letters formed some of my favorite words, words that will always be with me. 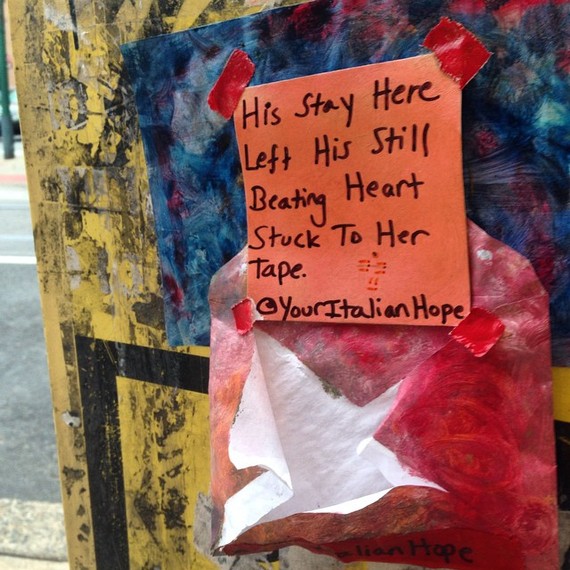 Slam-o's next check in was at Kilauea Caldera Volcano, the most active volcano on earth. On a jagged mini mountain of ashen and black hardened lava, Slam-o's black letters emerged: 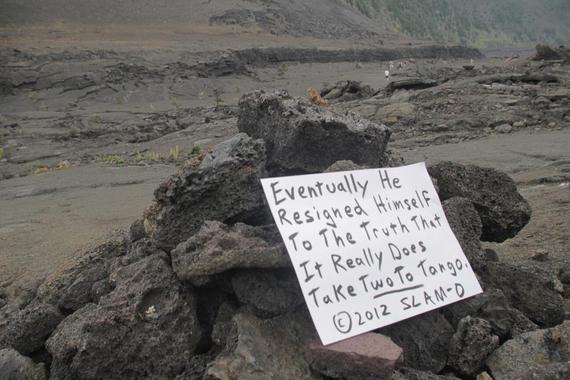 He was on to something.

All of these poems, carefully etched, are everything. They contain in them what's seemingly uncontainable--the fragile hope all of us are offered, if we let it in. This hope inspires us to make something new, to draw out our roots of beauty. Now that we are no longer dormant, we will stay awake.

Realizing that these poems are nothing if we don't live them out, I replied: 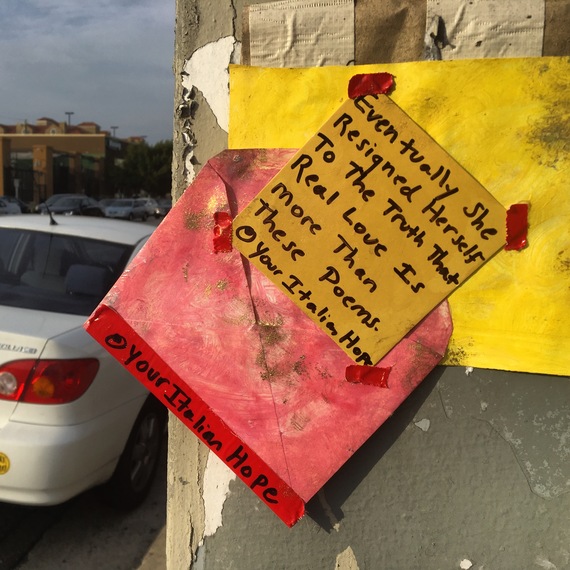 More than these poems. It was time to make our love real. After years of writing our way into each other's hearts, I planned my move to Los Angeles to be with slam-o. 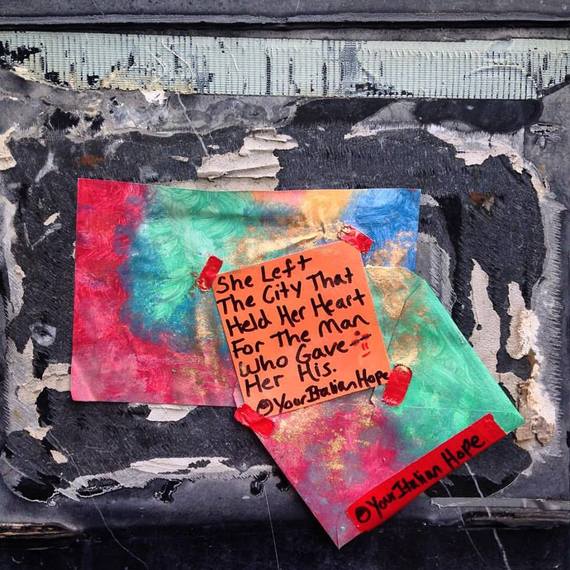 Living with slam-o has been better than my realm of dreaming. 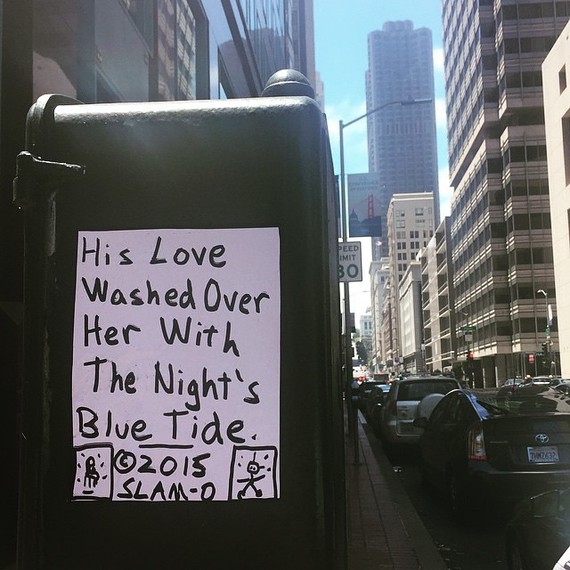 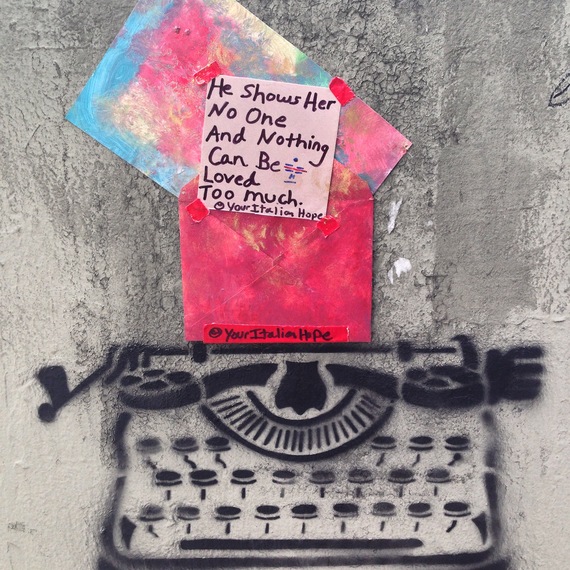 We move into a top floor apartment with a balcony overlooking the Hollywood Hills. Palm trees brush against our windows. The sun filters in and Alan cooks just the thing I want to eat, without asking. He positions my reading lamp perfectly when I read before bed. He lightly holds my waist with his arm when I sleep. He waits for me to slowly wake in the morning, even though he is already up.

Every day gets better.

I remembered slam-o had told me he carried a sketchbook with him all of the time, but for some reason had stopped. For our first Christmas, I bought a Moleskine sketchbook for him. One night I saw over his shoulder: 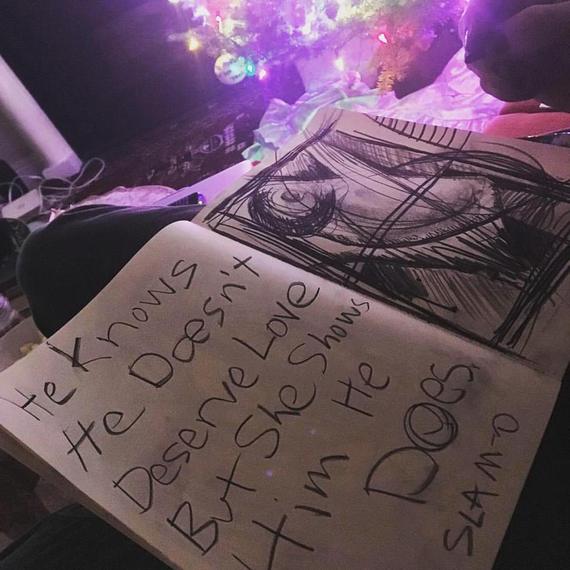 Most of slam-o's poems are left where he posted them. But he couldn't leave the poem on the volcano in Hawaii because he didn't want to desecrate nature. (He's the kind of person who picks up litter in the streets when he sees it). But for some reason, it's perfectly fine to adorn newspaper stands, concrete walls, and dumpsters with his poetry.

Throughout our long-distance courtship, slam-o sent me a few poems on paper in the mail. When we moved in, I asked him to frame them and hang them above my piano, in my writing space: 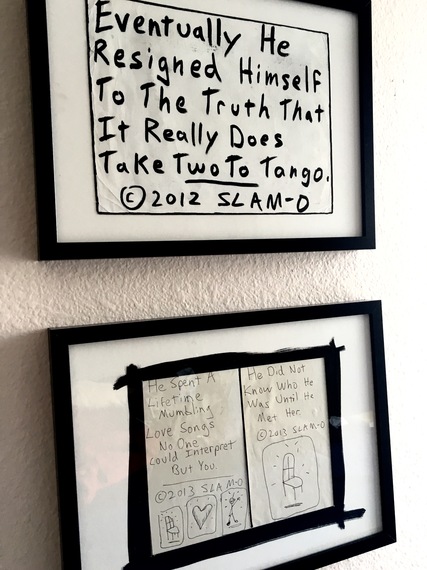 His poems traveled from an active volcano in Hawaii, to my modest fridge in my Philadelphia studio apartment, to our freshly-painted wall in our Los Angeles home. 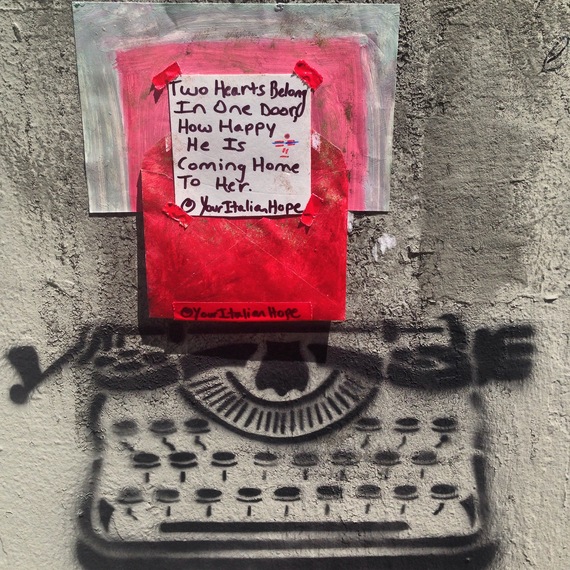 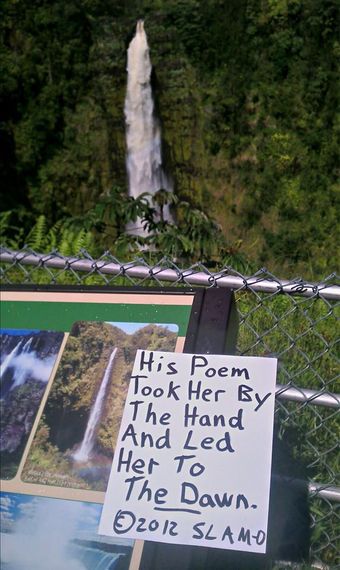