Many once thought that mushrooms spread by passively dropping their spores, after which the reproductive packets would hopefully get picked up by a gust of wind, and carried thither and yon.

Mushrooms create air flow by allowing their moisture to evaporate. "A mushroom is essentially doing less than nothing to protect its water from evaporating off," Roper told LiveScience.

This evaporation allows them to cool off, as the phase change from liquid water to vapor uses up heat energy. Cold air is more dense than warm air, and has a tendency to flow and spread out, he added. 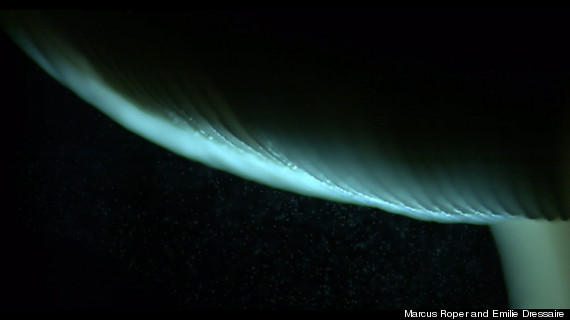 The evaporation also creates water vapor, which is less dense than air. The two forces help carry spores out of the mushroom, and give them a little lift, he said. The lift can carry spores up to 4 inches (10 centimeters) horizontally and vertically, he said.

Mushrooms often live on the forest floor, under logs or in very tight quarters where wind wouldn't be expected to reach, Roper said. The ability to "create wind" helps give spores a better chance at finding a new, moist location to land and begin growing, he added.

Roper and colleague Emilie Dressaire, a professor of experimental fluid mechanics at Trinity College in Hartford, Conn., visualized the spread of spores from mushrooms with laser light and a high-speed camera. They combined the imagery with calculations of water loss and temperature readings of mushrooms to show how the fungi create their own air flow, Roper said. They created images of spores issuing forth from a variety of species, including Amanita muscaria mushrooms, a type of hallucinogenic mushroom. [Tales of Magic Mushrooms & Other Hallucinogens]

The study, presented today (Nov. 25) at the annual meeting of the American Physical Society's Division of Fluid Dynamics in Pittsburgh, suggests all mushroom-producing fungi may have the ability to spread their spores in this way, Roper said.

Recent work by Anne Pringle, a mycologist at Harvard University, has found that fungi actively spread their spores in other ways, for example by shooting them out at high speeds in rapid succession.

This study by Roper and Dressaire presents another example of how "fungi are actively manipulating their environment," said Pringle, who wasn't involved in the study. "Even though we perceive them to be passive, they are quite active in moving themselves around."

Although the study used laser light to visualize the spread of spores, mushrooms can be seen doing their thing in a natural setting. "If you go in to the woods with a flashlight at night you can see the spores going out in great big clouds," Roper said.

Fungi are the "dark matter of biology," Roper said, and very little is known about them. For example, scientists aren't even sure how many species there are, though estimates range from 600,000 to 6 million species, Pringle said.