Vitamin D is an essential vitamin that boosts the immune system and plays vital roles in human metabolism. Did you know that tasty mushrooms are one source for vitamin D, and that you can naturally multiply their levels by exposing them to sunlight? 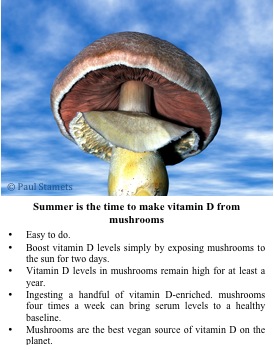 We evolved living in more sunlight than today. We make our own vitamin D when sunlight hits our skin cells. Many people living in the northern hemisphere, however, suffer from lower levels of vitamin D during the fall, winter and spring. Fortunately, you can make your own supply of vitamin D-enriched mushrooms by simply exposing them to sunlight. You can sun-dry or UV-zap store-bought or homegrown shiitake, maitake, button, and many other mushroom species. My personal preference is home grown organic shiitake. The high vitamin D levels generated will last for more than a year. Surprisingly, even sliced and dried mushrooms -- including wild ones picked the year before -- will soar in vitamin D when placed outdoors under the sun. Now, the summer time, from June until September, is the best seasonal window for people in northern latitudes to make vitamin D-enriched mushrooms!

Many physicians view low levels of vitamin D as a serious medical pre-condition. In extreme cases, vitamin D deficiencies can cause diseases such as rickets. Insidious diseases, such as cancer, are immune-mitigated. Without adequate vitamin D levels, your immune system can get impaired. This is why cancer patients are often prescribed high daily doses of vitamin D, up to 4,000-10,000 International Units (IU), compared to the FDA recommended Daily Value (DV) dose of 400 IU for adults over 50 years in age. Please consult your physician before taking such large doses (1 IU is equal to 40 micrograms). 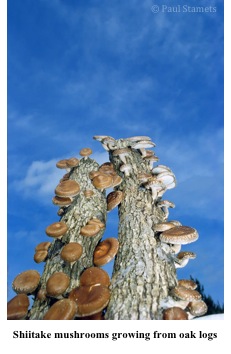 New recommendations from the Institute of Medicine, a branch of the National Academy of Sciences, increase the dosage to 600 IU per day for people up to age 70, and 800 IU for those over 70. Many naturopaths and physicians suggest ingesting at least 1,000 IU/day. A 2012 report in the Journal of Clinical Endocrinology & Metabolism combined the results of eight clinical studies and showed that older people taking 1,000 IU of vitamin D, in combination with 1,000 mg of calcium, for three years had a 7 percent reduced death rate (Rejnmark, 2012). When not ingesting vitamin D mushrooms, and especially when traveling, I take a 1,000 IU wild sockeye salmon vitamin D3/omega-3 product (VitalChoice -- www.vitalchoice.com) several times a week, or daily when I remember.

The commercially-common sources of vitamin D are vitamin D3 (cholecalciferol) that comes from sheep's wool (lanolin), pigskins, and some oily fish (mackerel, sardines, anchovies, herring, trout, and salmon). Mushrooms and animal skins create vitamin D when exposed to sunlight. Mushrooms are rich in the vitamin D precursor ergosterol, which ultraviolet B (between wavelengths of 290 nm to 315 nm) converts to ergocalciferols, also called provitamin D2. Mammal epidermis has cholecalciferol, which ultraviolet light converts to D3.

Which is better, vitamin D3 or D2? The New England Journal of Medicine published an exhaustive article comparing the metabolic pathways of vitamin D2 and vitamin D3 (Holick, 2007). Our enzymes convert both D vitamins into 25-hydroxyvitamin D, and then into the active form of 1,25-dihydroxyvitamin D in our kidneys. This form of vitamin D can bind to receptors in various tissues around the body for use. One advantage of vitamin D3 is its longevity after ingestion -- staying in the bloodstream for weeks compared to days for vitamin D2. However, for people taking vitamin D supplements several times a week, there seems to be no significant advantage in taking one form or the other. 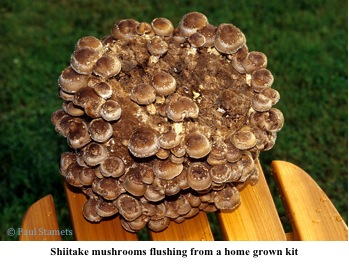 Moreover, eating mushrooms packed with vitamin D2 confers many other health benefits. Mushrooms have many helpful nutrients, including beta glucans for immune enhancement, ergothioneines for antioxidative potentiation, nerve growth stimulators for helping brain function, and antimicrobial compounds for limiting viruses. I will write more about this in the future on The Huffington Post.

While making your own vitamin D3 from sheep or pigskins may be possible, it is rather gruesome and technically difficult. Consuming vitamin D3 from fish is not an option for vegetarians. Vitamin D from mushrooms is not only vegan and vegetarian friendly, but you can prepare your own by exposing mushrooms to the summer sun. Mushrooms grown indoors have very little vitamin D but reserve great potential for hyper-producing it.

Here is a simple experiment we did one summer afternoon in Kamilche Point, Wash. We compared several forms of organically-grown shiitake mushrooms, which had starting levels of 100 IU/100 grams. We compared the vitamin D levels of three sets of mushrooms, all from the same crop. The first was grown and dried indoors. The second set was dried outdoors in the sunlight with their gills facing down. The third set of mushrooms was dried outdoors in the sunlight with their gills facing upward for full sun exposure. The most vitamin D was found in shiitake dried with gills up that were exposed to sunlight for two days, six hours per day. The vitamin D levels in these mushrooms soared from 100 IU/100 grams to nearly 46,000 IU/100 grams (see chart). Their stems, though, produced very little vitamin D, only about 900 IU. Notably, vitamin D levels dropped on the third day, probably due to overexposure to UV.

Most interesting to me is that when we tested our mushrooms nearly a year after exposure, they preserved significant amounts of vitamin D2. I suspect values are much higher initially, gradually falling in time, consistent with reports by other researchers. This means that you can capture vitamin D in mushrooms and have a ready source of this important vitamin -- and delicious mushrooms -- through the fall, winter, and spring.