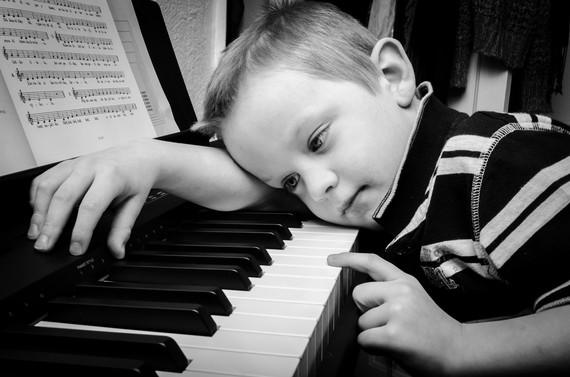 That song you can't get out of your head might be doing something more than prompting you to hum the tune, according to a new scientific study on genes and music (Kanduri et al., 2015).

The study found that one of the genes that is turned on (or -- in biological jargon -- "expressed") when listening to music is called SNCA (synuclein-alpha) and it is involved in the secretion and transport of dopamine. Dopamine is your "go-get-em" neurotransmitter, providing that jolt of motivation that helps you learn a new language, get yourself to the gym, break a bad habit, get out of bed when you'd rather be hitting the snooze button, or choose a healthy snack instead of a Twinkie.

The researchers, working at the University of Helsinki in Finland, examined all 24,000 genes in 48 people who listened to an emotionally evocative piece of music, Mozart's third violin concerto. They compared their genomes to 15 control participants who didn't listen. Not only was the expression of SNCA enhanced, but genes that facilitate the transmission of signals in the brain, genes that prevent the degeneration of neural networks, and genes involved in learning and memory were upregulated too.

The effects were stronger for the music lovers in the group; for those with a high degree of musical aptitude, the expression of between 45 and 97 genes was beneficially altered. That's a lot of positive neurological and genetic improvement for a single brief pleasant experience.

Humans share many of these genes with other animals. One of the most fascinating discoveries of the study came when the researchers compared the results from human DNA with the genes of birds. They found that several of the genes tagged in the study are responsible for the singing of songbirds, as well for their ability to learn songs in the first place. Dr. Irma Järvelä, one of the authors of the study, says that, "The up-regulation of several genes that are known to be responsible for song learning and singing in songbirds suggest a shared evolutionary background of sound perception between vocalizing birds and humans."

This genetic basis of musical appreciation might also explain why music emerged independently in many primitive societies tens of thousands of years ago. Flutes made from bird bone and mammoth ivory have been found in caves inhabited by early humans, and carbon dating shows some to be more than 40,000 years old.

There is a great deal of research demonstrating that music affects your mood. It can alleviate anxiety and depression, increase your cognitive function, and affect your worldview. A study conducted by the University of Groningen (Jolij & Meurs, 2011) found that happy music didn't just make you happier and sad music sadder; the music changed your perception of the world. People literally saw happy images when listening to happy music even if those happy images didn't even exist in reality.

There are several take-home messages from this and other research on music and happiness. Here are some practical ways to boost your gene expression using music:

1. When you're feeling stressed, give yourself a "music bath." Put on headphones, pick a soothing classical piece, and tune out the world for a few minutes. I've been listening to the Brandenburg Concertos for 40 years and I never get tired of them. I find myself in a deeply peaceful state when I listen to them.

2. Select background music for your day that makes you feel good. A study in the journal Applied Cognitive Psychology (Perham & Vizard, 2010) found that violent or dissonant background music impaired the ability to think clearly and complete cognitive tasks, whereas pleasant tones enhanced performance. In my office, we have a radio station called "New Age Piano" playing all day and it provides a soothing audio environment.

3. When you're in pain or have physical symptoms, put on your favorite piece of music, and get deeply absorbed in it. A study in the Journal of Pain (Bradshaw et al., 2011) found that attention to music reduced both pain and anxiety.

4. Create a track of your favorites, and keep it handy on your wireless mobile device. I have one called "Happy Music," which contains all the most uplifting tracks I've found over the years. Some are offbeat, like the Gilbert and Sullivan song "Captain of the Pinafore." Others are mainstream, like tracks from Celtic Women or Narada. Still others are meditative piano pieces by Satie and Liszt. I know that playing my personal collection of happy songs always lifts my mood.

5. When "life happens" and you get stressed by a bad event at work or home, remove yourself from the stressful environment (take a walk, go to the gym, even sit in the bathroom) and listen to soothing music for a few minutes. This way, you "reboot" your perceptual apparatus and reduce stress hormones such as cortisol, which have a variety of bad effects if they stay elevated for too long (Church, Yount, & Brooks, 2012).

Remember that psychological states aren't just "all in your head." They affect your body at very basic levels, all the way down to which genes are expressed in your cells. The good news is that you can take charge of the process, helping deliberately trigger the expression of healthy genes by creating nurturing emotional environments through music, time in nature, mindfulness, EFT (the tapping technique), healthy relationships, and many of the other free and accessible tools at your disposal.