As the country awaits the presidential election, suspense and tension hover like thick fog blankets over San Francisco bay. Voters from both sides are seeking reassuring signs. Campaign teams feverishly look for ways to secure additional votes and lure undecided voters. Online polls proliferate, bringing comfort or alarm to those who read them repeatedly. 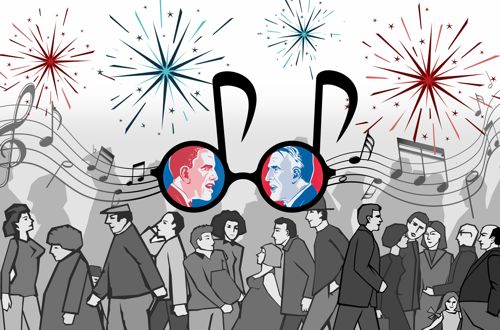 The question on everyone's mind: who will win the swing states?

But the mystery remains...

Can We Turn to Music for Answers?

This article introduces an innovative lens to look at the elections: through the study of voters' musical preferences and affinities.

A social music company called Smule ran an insightful experiment. They put the 900 million songs in their database through rigorous analysis, correlating the musical tastes of users with "red" and "blue" states. The results were illuminating.

"Our musical tastes are just as polarized as our country!" says Jeffrey C. Smith, Smule CEO and co-founder.

My interest was piqued, and I sought to learn more. For background, the company's products allow anyone with a mobile device to play, sing, and create their own version of songs. "Smule is about expressive music-making and the creative output of individuals and populations," adds Dr. Ge Wang, Smule co-founder and Assistant Professor at the Center for Computer Research in Music and Acoustics (CCRMA) at Stanford University.

The full analysis is complex, but for the sake of simplifications, I shall illustrate the findings with three songs.

Let's first take Gimme Shelter, a Rolling Stones classic -- and a personal favorite of President Obama. Crunching the numbers, Smule found that Gimme Shelter is played twice as many times in blue states, than in red states.

Daddy sang bass,
Mama sang tenor.
Me and little brother would join right in there.
Cause singing seems to help a troubled soul.
One of these days and it won't be long,
I'll rejoin them in a song.
I'm gonna join the family circle at the Throne.
Oh, no the circle won't be broken.
By and by, Lord, by and by.

Fascinating to see such striking differences in musical preferences between the red and blue states! An untapped opportunity for campaign managers seeking to understand and influence voters; but I am getting ahead of myself.

What About the Swing States?

Can music give us insights into voters' preferences in the swing states?

For this Smule tested Free Bird, a broadly appreciated song by Lynyrd Skynyrd. The song proved to be neutral -- and was equally played in red, blue, and swing states.

If I leave here tomorrow
Would you still remember me?
For I must be traveling on, now,
'Cause there's too many places I've got to see.

Linking states to electoral votes, Smule concluded that Obama will win the election, with 285 Electoral College votes to Romney's 253. 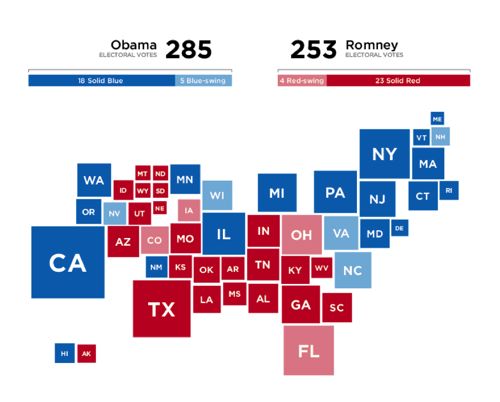 We shall find out on November 6th if Smule's predictions are accurate. Nonetheless, their analysis offers a novel and insightful perspective on the election and voter sentiment.

Will this create an opening for music to play a bigger role in future elections? Campaign managers seeking new levers to build a competitive advantage should take note, and further investigate.

Our reaction to music is deep and visceral. It comes from a deeper place than our answers to pollsters.

As the great Persian poet Hafiz said: "Art offers an opening for the heart. Art is, at last, the knowledge of where we are standing in this Wonderland, when we rip off all our clothes and this blind man's patch veil, that got tied across our brow".

If we care to listen, art can give us a pulse on the underlying beat of the world, which we cannot feel through technology and statistics alone.

It's time to tap into and cultivate art insight, to deepen our understanding and expand our potential, as individuals, as politicians, as corporations, and as nations.