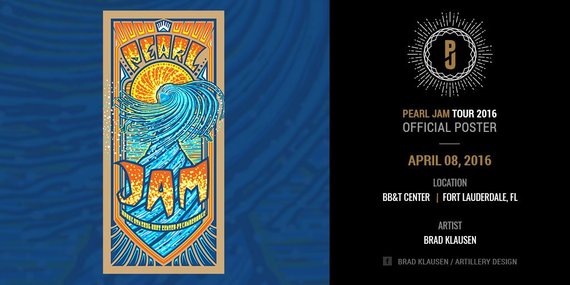 "State of Love and Trust" and "Breath" were the first songs of yours I ever heard, off the soundtrack to Cameron Crowe's film Singles when I was 13. I was living in New Delhi, India at the time -- half American, half Sri Lankan Third Culture Kid here -- and often how I discovered American bands back in the pre-Internet dark ages living abroad was through movie soundtracks. I bought a cassette of your first album Ten soon after and that was it for me: I was in love and have remained in love with you ever since. As a teenager, your songs were the first that seemed to understand me and what I was going through, trying to survive amid so much violence. I'd put on my walkman to escape and Eddie, as a teen your voice sang me to sleep every night for years.

At 37 I finally had the opportunity to hear you in person, a long overdue meeting that took place in Fort Lauderdale's BB&T Center on the first night of your 25th anniversary tour.

The moment you started playing I couldn't help it, I burst into tears, clinging to the railing for support. I was the chick up in the nosebleeds at the back of the house who bawled through "Go," "Mind Your Manners," "Corduroy," "Given to Fly," "Help Help," "Deep," "Nothingman," and "Elderly Woman Behind the Counter in a Small Town." It was as if your music put an ultraviolet light through my body illuminating just how much of my veins themselves are riddled with the scar tissue of so much trauma, from childhood and beyond. Your music felt to be at the exact same frequency as decades of pain, some of it so deep and so deeply rooted I'd forgotten that it was pain at all -- it had become this thing I carried around, like a bum knee or chicken pox blemish, but enormous and dark and heavy.

I cried for that young girl who felt so alone until she heard Ten and finally realized that she wasn't the only one going through it. An unsurpassed intensity of emotional agony came to the surface in waves and flowed out through my eyes. Every moment during which I had ever turned to your music for escape, solace, help rose to the top and finally had a chance to be released from my body and my spirit. Like a child, I cried myself out in those opening eight songs, and in the days since I've been finding out how little of all that primal and fundamental sorrow, rage, and grief are now left behind. I feel simultaneously emptied and filled. Raw, like layers of me have been peeled off and I'm growing new skin. Finally, I really am mine.

Your show gave me the most profound and cathartic emotional release I've experienced in years. And when you played "Alive" towards the end I was overwhelmed with gratitude for how much it is because of you that I am here at all. Your music saved my life on so many occasions there's no point taking tally. I can definitively say that if not for you, I wouldn't have made it to celebrate my 37th birthday just a few days before Mike. Thank you for turning the stage and singing "Last Kiss" to all of us at the back of the house. Best birthday present EVER.

And I realized something else profoundly feminist about you I'd never noticed: how many of your songs are from the perspective of women, many of whom are having none of what society expects from them, like myself. "Dissident," "Daughter," "Why Go," "Better Man," "Nothingman" and more. And I also started to see the thread of water that links so many of your songs, where cleansing, where the washing away, where the rivers and tides take and neutralize our anguish. "Oceans," "Release," "Deep", "Last Exit," "Tremor Christ," "Faithful," "Wishlist," and more. In retrospect, it was so natural that I would be moved to tears by your music. If I'm going to unpack the why of my long-standing love for you -- one surpassed in years only by the late and great David Bowie and Prince -- then the presence of these strong women and the healing waters of your songs are two grand reasons why of all the bands that have come in and out of my life y'all have remained. The poster from your opening night show is even a woman made of water, her hands outstretched as if dancing, an outward spray of joy, the sun lighting half her mermaid face. I've actually made self-portraits that are eerily similar. Such beautiful and resonant synchronicity.

It's a beautiful thing to be cracked open so wide and instead of darkness pouring out, it is all light.

Until we meet again, and love always,