A while back I posted a commentary and review on Indie music as a soundtrack and metaphor for troubling financial times. In today's atmosphere of music industry giants swallowing the little Indie guys and the news about Ticketmaster's Echomusic shutting down the websites of 200 mid-level artists with barely a "slam, bam thank you guys and gals," a little band from Atlanta proves that all it takes is heart to produce art and great PR. Imagine a very good music video that cost nothing but 24 hours of time on a Mac 2004 G4 Powerbook that came with iMovie 04, and you get the idea. The kids from Herman Put Down the Gun who produced "Lonely Street" did not even have "modern" technology, an iMovie update, or the world's fastest and best media-ready computer. Give them chops for knowing how to use social media sites like MySpace and Facebook, and they are off and running with a very sweet little video.

I came across the "Lonely Street" video on Facebook, and since I am a huge fan, I wrote to front woman Sonia Tetlow and asked how much time and money it cost to put the thing together. Plus, I wanted to write something positive about the music business for a change.Turns out it cost zip. A week ago, instead of having band practice, the band met at Tetlow's house and went for beers in their Atlanta neighborhood while taking turns with an eight year old camera that had not seen much service.

Tetlow explained the production process. No storyboard, no meetings, no special sets, no producers, directors, no videographers, no mammoth budget, and no corporation to take a portion of any sales.

So it's pretty much just us driving there and walking around being silly like we tend to do when we're all together. So that's where the live footage came from including the bit where I had a heat stroke. It took Connie (a friend) a minute to realize I really needed some Gatorade and stop filming.

Heatstroke! Wasn't that taking cinéma vérité a bit far? I promptly wrote another note to Tetlow asking if she was joking. Turns out she wasn't.

Yah, it was 100 degrees that day and we had to play in the sun, so God only knows how hot it was. Anyways, I made it through the set and then promptly collapsed. Rock 'n roll!

It's all there on the edit. Tetlow passed out in front of her mic and Bolley leaning over her trying to figure out what is wrong. Blame the heat and humidity in Atlanta, but it is a charming taste of reality in the lives of struggling musicians.

Besides enduring heatstroke, Tetlow had never edited a video before and still hasn't figured out how to get the clip up on YouTube.

I had recently explored iMovie for the first time the week before doing a roller derby video for us. Seeing how easy it was gave me the idea for us to film more and do a music video. I know I'm behind the curve on this since YouTube's so popular, but everything in its own time I guess. Anyways, we decided that the first song we'd like to try to do a video for was, "Lonely Street." So I uploaded the footage we'd taken onto my computer and began to watch it all while listening to the song. I tried to pull out clips that made sense image or vibe-wise and put them together in a way that flowed, syncopating them with the beat and changes in the music. It took only took me a day to do it and suddenly we had a video for free! 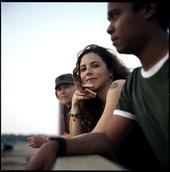 The little band that could might be a better way of describing Telow and band mates Lee Kennedy on bass and drummer Linda Bolley. Tetlow is a veteran of Cowboy Mouth, front woman for the Sonia Tetlow Band, sits in with the Paul Sanchez Rolling Road Show, and Bolley has a Grammy nomination under her belt for Michelle Malone's 2006 "Sugarfoot."

The way I look at this story, all it takes is heart to produce art. Tetlow tells me it is all about having fun with what you do in this life.

So that's the whole story. I have to say the video makes me smile. I hope other folks like it too, but I'm glad that I'll always be able to watch it and remember a really hot gig at Roller Derby and a night in our neighborhood hanging out with my friends and band mates. The song is about looking around you at all you have and remembering the joy in the face of despair; the video gives you a glimpse of what that looks like, and I know I am so very lucky.

It looks like social media technology, even if it is somewhat outdated, offers hope for the little guys. I've gotta call Tetlow and teach her how to use Twitter. With a few tweets about this sweet video, the sky's the limit.